Home » News » Only drama before Chamundeshwari 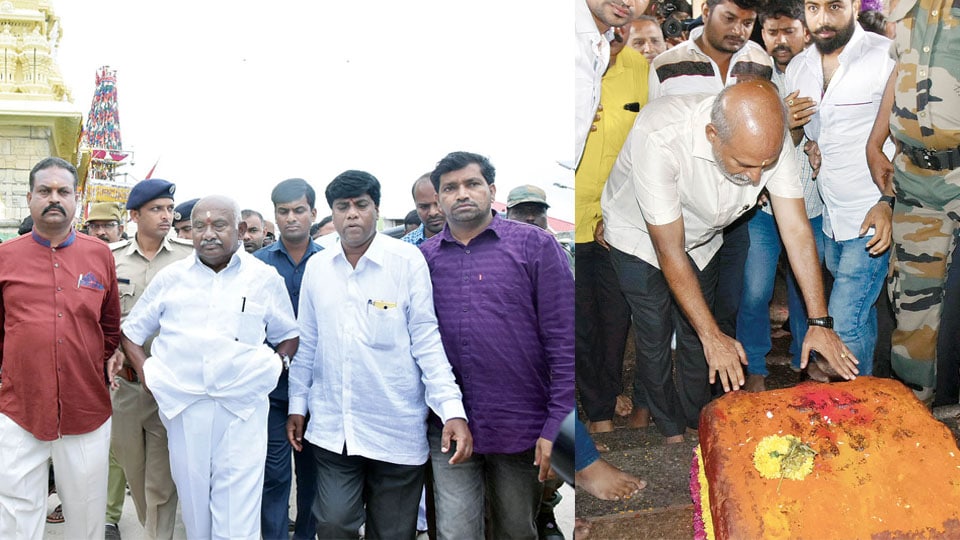 Only drama before Chamundeshwari

Mysuru: The usually peaceful and serene atmosphere atop Chamundi Hill witnessed high drama this morning with disqualified Hunsur MLA A.H. Vishwanath and K.R. Nagar JD(S) MLA S.R. Mahesh visiting the hill temple for a political face-off.Both were supposed to swear before Goddess Chamundeshwari to prove the allegations levelled by each other in the past. However, both leaders did not face one another.  Instead, they continued to make allegations as before. Their political drama only caused problems for devotees who had come to seek the blessings of Goddess Chamundeshwari.

At first, Vishwanath, who had dared S.R. Mahesh for a truth test, entered the temple premises at about 8.52 am along with his supporters and offered prayers. Later, speaking to media persons, he said that he had not come for any swearing ritual but had visited the temple to see the person who had allegedly paid him Rs. 25 crore to quit as Hunsur MLA as claimed by S.R. Mahesh.

“S.R. Mahesh had made allegations in the Assembly stating that I had accepted Rs. 25 crore from a person to quit as MLA. I had dared him (Mahesh) to prove his allegations by bringing the person who had allegedly ‘bought’ me.  I have only come to see that person and not to participate in any swearing ritual,” he added.

Former Minister S.R. Mahesh, who also arrived at Chamundi Hill a few minutes later, accompanied by T. Narasipur MLA Ashwin Kumar and former Mayor M.J. Ravikumar, went inside the temple only after Vishwanath came out.  Meanwhile, Vishwanath waited for Mahesh for about an hour outside the temple but the JD(S) MLA never turned up. Instead, he preferred to stay inside the temple. Agitated by this, Vishwanath targeted Mahesh stating the MLA had resorted to escapism.

Reacting to this, Mahesh told mediapersons that he still stood by his statements against Vishwanath and added the former JD(S) State President had not quit as MLA because of him (Mahesh) but had resigned for the money offered to him.

“Three of our (JD-S) MLAs quit as there was a change in political scenario. I have never commented on them. But, he (Vishwanath) made personal attack on me while he was in party and after quitting as well. He also spoke twice against me from Mumbai. In fact, he has also mentioned about the discussion we had in Vidhana Soudha during which Vishwanath said he would not quit despite being pressurised. But, now he has retracted,” said Mahesh.

Mahesh also said that he had submitted his resignation as MLA last month after being hurt by Vishwanath’s statements.

“Didn’t we know what caste Vishwanath belonged when he was offered a ticket to contest from Hunsur and while electing him as the State JD(S) President,” questioned Mahesh, who turned emotional.

Later, both leaders, who did not face each other, left Chamundi Hill. While the leaders made allegations against each other, their supporters continued to shout pro and against slogans. The temple premises and devotees, who used to hear the chanting of vedic hymns, today got to hear political slogans.

Meanwhile, City Police had provided tight security atop the hill to prevent untoward incidents. Devotees, who were put to hardship, were seen cursing the leaders for creating a chaos.

I will contest Hunsur by-poll

Vishwanath told mediapersons that he will contest the Hunsur by-poll scheduled for December 5 and added that JD(S) will be pushed to third place.

4 COMMENTS ON THIS POST To “Only drama before Chamundeshwari”