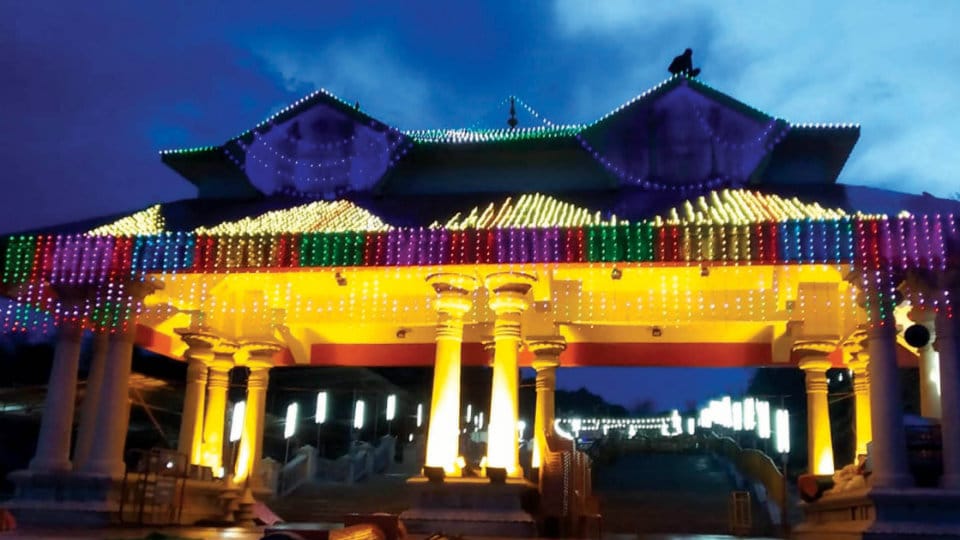 Madikeri:  The Annual Theerthodbhava at Talacauvery in Kodagu district will be held in the intervening night of Oct. 17 and Oct. 18 at 12.59 am as per the Hindu almanac on the Tula Sankramana Day, Karkataka Lagna. Temple authorities told Star of Mysore that this year, the holy occurrence is set to take place in the early hours.

On this day, it is believed that Goddess Cauvery comes in the form of a fountain-head where water gushes out from the ‘Brahmakundike’ at the predetermined time.

The Kodagu District Administration has made all arrangements to facilitate devotees who come from various parts of the country to be a part of the holy event. Arrangements have been made for devotees at Talacauvery and Bhagamandala. Metal sheets have been mounted at the venue as heavy rains are predicted.

Devotees have been asked to bring steel or copper containers instead of plastic bottles or pots for collecting Holy water (Theertha). This year, plastic has been banned in Talacauvery. Usually hundreds of people, holding plastic pots and bottles, rush to the  ‘Brahmakundike’ after taking a dip in the Kalyani to collect the Holy water.

This year, however, plastic has been banned and devotees will be screened before being allowed to the venue. Holy water would be given only to those who bring steel or copper containers.

The Madikeri-Bhagamandala-Talacauvery Road is being repaired and potholes were covered with bitumen to facilitate smooth movement of traffic. The work on illuminating the area for the festive occasion has been done.

Separate parking arrangement has been made at Talacauvery and the area near the Holy pond was being barricaded to regulate the rush. Two giant LED screens will be put up at the venue to live telecast the event. More than 20 special KSRTC buses will operate between Madikeri and Talacauvery to facilitate transportation of devotees. Certain private organisations and Kodava Samajas too have arranged free buses from Bengaluru and Mysuru.

Meals will be provided to devotees from tonight. Starting from Cauvery Sankramana, mass feeding will be held for a month. As a precautionary measure, sale of liquor has been banned till 6 am on Oct. 19, within a 20-km limit of Bhagamandala Police Station.

This year, the holy place is set to attract more devotees as the Krishna Raja Sagar (KRS) Dam is full and the entire Cauvery basin will be benefitted. People from Mandya, Mysuru and parts of Tamil Nadu, who depend on Cauvery water for irrigation, are expected to arrive to witness the special event in large numbers.

CCTV cameras have been installed in sensitive places and barricades have been put up to avoid rush. Clean drinking water has been arranged near the temple.

Ambulance and medical personnel will be deployed at Talacauvery to attend to any emergency cases.

READ ALSO  Cauvery Theerthodbhava to be celebrated as per tradition on Oct. 17: Minister

Big Bazaar, one of the leading hypermarket chains from Future Group, is celebrating Tula Sankramana at its JLB Road branch in Mysuru. Goddess Cauvery puja will be organised on Oct. 18 at 11.30 am followed by distribution of Cauvery “Theertha” at the Store premises.

Kodava Samaja, Mysuru, too will be celebrating Cauvery Sankramana festival at its premises in Vijayanagar 1st Stage  here tomorrow (Oct. 18).

Kani Puja will be performed at 10.30 am and Holy Water (Theertha) will be distributed to all those present in the celebration. Devotees of Goddess Cauvery are requested to assemble in Kodava Samaja premises at 10.30 am and participate in the celebrations and receive Theertha. For details, contact Kodava Samaja Hon. Secretary Malachira M. Ponnappa on Mob: 98441-38873, according to a press release.