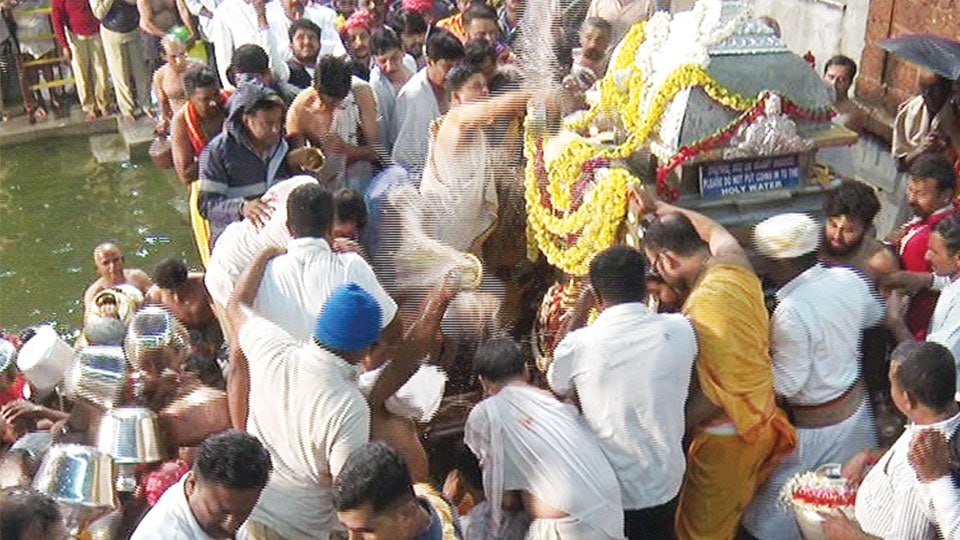 Talacauvery: Thousands of devotees from Kodagu, across the State and Tamil Nadu congregated at Talacauvery in Kodagu on the intervening night of Oct. 17 and 18 to witness Cauvery Theerthodbhava amid chanting of mantras and other religious rituals.

The holy event took place exactly at the predetermined Muhurtha of 12.59 am in Karkataka Lagna at the foothills of Brahmagiri inside the Holy Brahmakundike, considered to be the source of River Cauvery. It is believed that Goddess Cauvery comes in the form of a fountain-head where water gushes from the Brahmakundike. More than 20 priests chanted Vedic hymns before sprinkling holy water on the devotees.

The team of priests was led by Thantris Ananthakrishna Achar and Gururaj Achar. As the water bubbles appeared in the Brahmakundike that was filled with flowers, kumkum and vermillion, priests sprinkled water on the devotees and they chanted “Govinda” “Govinda”, seeking the blessings of the Goddess.

Though the Police had erected barricades to prevent rush, devotees swarmed around the Brahmakundike and the Kalyani to get their share of water. As the Muhurtha neared, people, with tonsured heads and wearing white dhoti were competing with each other to reach the nearest point of Brahmakundike to get sprinkled with the holy water. Many Kodava men were also wearing the traditional Kodava white Kuppiya Chele- Mande Thuni and were waiting to get holy Theertha.

This year, the District Administration and the Temple Management Committee had banned plastic pots and bottles and devotees were asked to bring steel or copper containers to carry the holy water. The temple management had arranged several copper vessels to supply Theertha.

Thousands of people had gathered around the Kalyani complex to witness the event. They had arrived at Talacauvery as early as 3 pm to reserve a place to see the event. Before coming to Talacauvery, the devotees had visited Bhagamandala to offer prayers at Sri Bhagandeshwara Temple on the banks of Triveni Sangama where River Cauvery joins Kannike and Sujyothi Rivers. From Talacauvery, the river flows underground and this is why Cauvery is also called Gupthagamini.

For those who could not make near the Kalyani, two giant LED screens were set up where the live visuals were beamed. Special buses were pressed into service from Madikeri to Talacauvery and separate parking arrangements were made for private and tourist vehicles.

Many organisations had set up free food counters for devotees on the road that led to Bhagamandala and Talacauvery. Bhagamandala and Talacauvery Management Committee, Kodagu Ekikarana Ranga, Kailash Mutt, Mandya Cauvery Theerthodbhava Samithi and other organisations had set up food counters. They will provide free food for another month for devotees.

As part of the festival, special arrangements were made at Triveni Sangama for ‘Pinda Pradhan’ and tonsuring of heads. The District Administration led by Deputy Commissioner Annies Kanmani Joy and the Police force led by Superintendent of Police Dr. Suman D. Pennekar took responsibility of organising the event without any glitches. The surging crowds were successfully handled and both the officers, accompanied by Additional DC Dr. Sneha and Zilla Panchayat CEO Lakshmipriya, supervised arrangements.

Minister Ashoka told newsmen that as Bengaluru too survives out of Cauvery water, he had asked the BBMP to contribute to the development of Talacauvery. “The BBMP will donate Rs. 1 crore for the development of Deva Thakka (priest-representative of God) accommodation at Talacauvery. The Mayor has agreed for the proposal,” he announced. Ashoka’s words were seconded by Mayor Goutham Kumar.