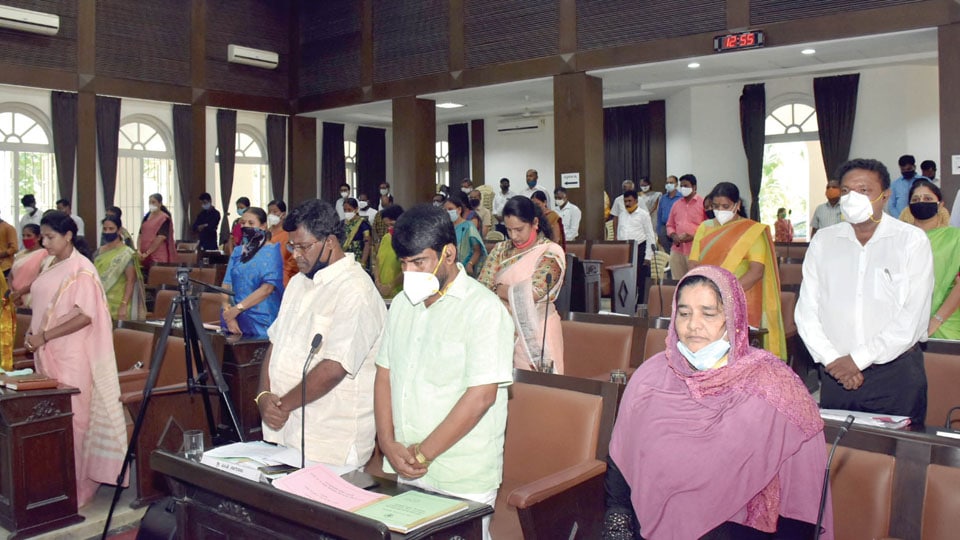 Mysore/Mysuru: Condolence to the victim of Hathras in Uttar Pradesh along with other late leaders and a Zilla Panchayat (ZP) official, created ruckus at the ZP general meeting at the ZP hall here this morning.

Soon as the meeting convened after a one-and-a-half-hour delay due to lack of quorum, the ZP Chief Planning Officer announced that a one-minute silence be observed as a mark of respect for ZP Executive Engineer Shankar who passed away recently. Soon Venkataswamy, a BJP member, who raised objection, wanted the meeting to also mourn the demise of  Union Minister of State for Railways Suresh Angadi of Karnataka who also passed away recently.

Even as Venkataswamy was arguing his case, Congress member Dr. Pushpa Amarnath, a former ZP President, demanded that the meeting also mourn the brutal rape and murder of Manisha, a 20-year-old Dalit girl at Hathras in UP, which has hit national headlines.

Venkataswamy taking strong exception to Pushpa Amarnath’s  contention, said that this was a violation of the protocol, when heated arguments broke out between BJP and Congress members, which went on for over 20 minutes. Later, JD(S) members brokered a truce, following which the meeting observed a one minute silence to all the dead mentioned by the members.

Earlier, the meeting, which was scheduled to begin at 11 am, was delayed by over 90 minutes due to lack of quorum, with most members absent at the start of the meeting. ZP President Parimala Shyam, VP Mangala Somashekar, CEO D. Bharathi and others were present.