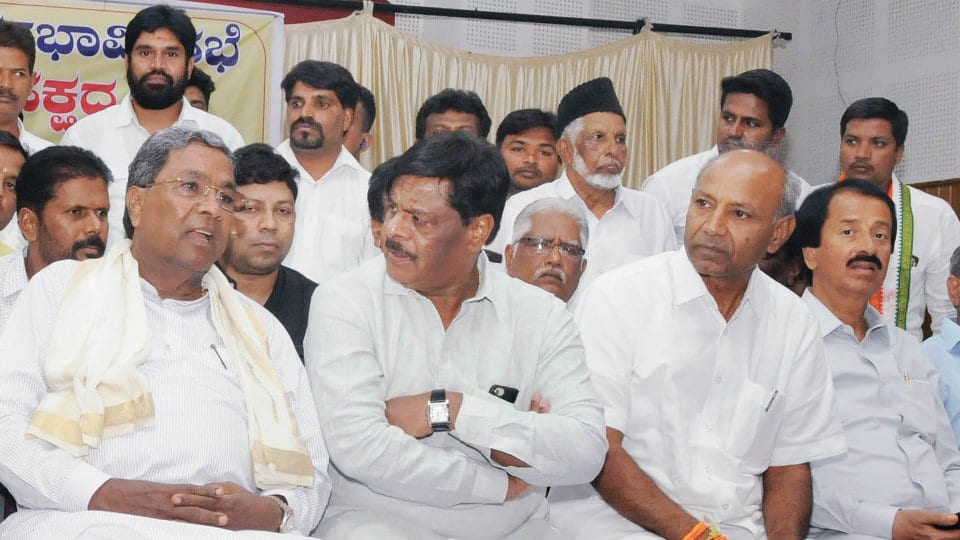 Ministers G.T. Devegowda and S.R. Mahesh of JD(S) conspicuous by their absence

Mysuru: The first preliminary coordination meeting of Congress-JD(S) leaders and party workers to chalk out winning strategies for the forthcoming Lok Sabha elections for Mysuru-Kodagu Parliamentary seat began in city this morning. The meeting was chaired by former Chief Minister Siddharamaiah, who is also the head of the State-level Coordination Committee for the coalition government.

The meeting that was scheduled to begin at 11.30 am began at 12.30 pm and only a handful of JD(S) ground-level leaders like former Mayor R. Lingappa, former Corporator K.V. Mallesh and Corporator S.B.M. Manju were present. Even the City JD(S) President K.T. Cheluvegowda was missing in action.

Sensing anxiousness among JD(S) party workers as their top leaders were absent, announcers kept on assuring them that both GTD and S.R. Mahesh would attend the meeting. However, they had not arrived till we went to the press.

Earlier too, the absence of GTD from the Lok Sabha poll scene in Mysuru sparked speculation over the understanding between the coalition partners. GTD was conspicuous by his absence when Vijayshankar filed his nomination papers.

Reacting on this, City Congress Committee President R. Murthy said GTD was away touring Kalaburagi and Kolar attending some of the events organised by the Higher Education Department.

“As GTD is the Higher Education Minister he has to attend the events. GTD has promised to return to Mysuru on Friday (today) and begin campaigning for Vijayshankar from Saturday,” Murthy told reporters.

‘Coordination will  pick up pace’

Congress Legislature Party leader Siddharamaiah said that both Congress and the JD(S) will achieve coordination and will together fight the Lok Sabha election. “Coordination is not instant and it can be achieved in a slow process with efforts from both sides. It is not the question of JD(S) workers voting for BJP and Congress workers voting for BJP. Both Congress and JD(S) have decided to go together in the election and they will be together,” he said.

Speaking to reporters at Mysore Airport this morning, Siddharamaiah said that he does not oppose Income Tax raids but the way in which the Department is ‘misused’ is bad for democracy. “Raids during elections are politically motivated to create a fear psychosis among parties and the BJP is using I-T wing as its own party agency,” he charged.

Why BJP leaders are spared?

Siddharamaiah questioned, “If the raids are not politically motivated, then why only Congress and JD(S) leaders and supporters are being raided? Why are BJP leaders like B.S. Yeddyurappa and Eshwarappa spared? They had promised Rs. 25 crore for our MLAs who defect to BJP. Even they should be raided. Eshwarappa had a currency note counting machine in his house. Why is he being shielded?”

On electoral canvassing, Siddharamaiah said that he will campaign in all 28 Parliamentary constituencies in Karnataka. “I will seek votes for Congress and JD(S) joint candidates and wherever Congress and JD(S) are fighting based on seat-sharing. Who are star campaigners? All of us are star campaigners. Actors do not wear a star badge on their forehead,” the former CM said.