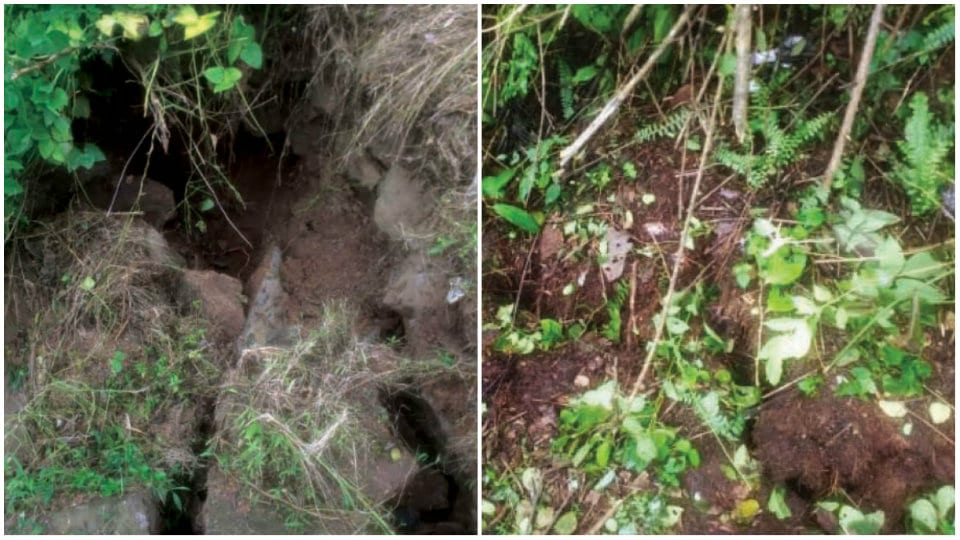 Mysuru/Madikeri:  Over 85 families who had made Ayyappa Swamy Betta in Virajpet their home have been evacuated following deep cracks developing in the hillock. Cracks have been observed at Ayyappa Hill and the adjoining Malethirike Hill due to unprecedented rainfall over the last few days.

Ayyappa Hill and Malethirike Hill come in the same range of Thora hillock where over nine people are suspected to be buried alive. While the body of three people have been recovered by the rescue teams led by the National Disaster Response Force (NDRF), search is on to trace the remaining six bodies.

A 25-metre crack had developed on Ayyappa Hill. It has been filled with cement and sand and covered with plastic to prevent water seepage. At Nehru Nagar, a big crack had developed in a house which had faced a similar problem during last year’s rain.

There are many families who have built houses atop Ayyappa Hill and Malethirike Hill and also there are a couple of bungalows and layouts at the foothill. If it rains heavily, the hillocks are in danger of sliding, taking down the houses and gardens.

Following the cracks on the hillocks, the Kodagu District Administration has requested experts from the Geological Survey of India (GSI) for a feedback. The crack this year is to the extent of 15 to 25 metres. The GSI has been asked to give a scientific report after examining the cracks at both the places.

In the report, officials from the Senior Geologists Office, Department of Mines and Geology in Madikeri have stated that landslide occurrences are caused due to the combination of various factors broadly like geological, geomorphologic and climatic factors.

Since Ayyappa Hill area is built up closer to the wet land and on elevated area, generally wet land areas are not stable enough for construction of group of houses. There might be groundwater over-saturation over the years which might have resulted in a slight jerk movement towards the southern valley fill which might have resulted in the hillock developing cracks. Also data of past 10-year rainfall reveals that the actual rainfall of 2019 in Virajpet is more than average,” the report has stated.

Officials said that Ayyappa Hill area should be recommended for detailed study by higher technical departments to scale the vulnerability and ensure the safety of the residents to avoid any casualty due to collapsing of houses which might occur in future due to mass movement.

“As a mitigation measure the residents of highly damaged houses should be evacuated from the locality to a safer accommodation. In the area these cracks should be continuously monitored by the local authority and if the cracks are progressively developing, it should be intimated to the District Administration to ensure safety of the residents of each and every house of the area,” the report stated.

If the reason for cracks is just the instability caused due to groundwater over saturation/soil piping which might have led to sudden jerk of land mass towards the southern low-lying area, a suitable structure like strong RCC retaining can be constructed at weaker collapsing places beside the house.

These retaining walls must be provided with holes for the water to flow. “A suitable cement-lined wider drainage system has to be designed according to the topography of the area. Also, suggestions must be taken from GSI and civil engineers of PWD or other geo-technical engineers for suitable remedial measures and to ensure the stability of houses and the terrain,” the report stated.