The city is experiencing a rise in mercury levels. And it’s going to get worse. Weathermen say the temperature is expected to gradually rise from now on and hence brace yourself for warmer months, from March to May or probably till June. This Weekend Star Supplement carries an insight into super-watery fruits that will help beat the summer heat with comforting ease.

Summer has arrived and temperatures will only head north from here. No wonder, nothing tastes better and refreshing than a fresh piece of fruit. With mercury levels increasing in Mysuru, fruit vendors have now started selling seasonal fruits which help consumers beat the heat and cool down their bodies. As the doctor rightly ordered, it is always best to consume what is available locally according to the season. Watermelons, muskmelons, cucumbers, grapes, oranges, fresh fruit juices, etc., have all made their way into the city markets and customers are in for a treat. A treat to beat the heat!

It is clearly evident that many sellers have set up watermelon stalls, fruit salad carts, cucumber stalls, musk-melon stalls, lime soda push carts and juice centres at various places in Mysuru. Be it the City Market, RMC, APMC Sub Yard, Yadavagiri Main Road, near Akashawani, Bannimantap Grounds, Vishvamanava Double Road, New Sayyaji Rao Road, D. Devaraja Urs Road, they are all over and their only mission: To keep you cool and in the process, make some money.

With the sun blazing mercilessly, heavy food makes it worse for the tummy. Fruits are the only rescue foods that come handy during this phase as they act light on the stomach and give a soothing feeling to the body.

Watermelons and summer! Haven’t they both become synonymous, as it is impossible to separate the bond between watermelons and summer? No wonder, the red juicy melons combat heat and act as a source of guilt-free diet. Mark Twain has rightly said, “When one has tasted Watermelon, he knows what the Angels eat.” Melons are no wonder, one in a Million!

Watermelon is a reminiscent of summer days. Who doesn’t remember? When we were kids, our parents sometimes used to avoid cooking heavy meals for lunch during summer. Instead, they would bring home a huge watermelon and would cut it into pieces and the entire family would munch it all along. The drippy syrup of the watermelon oozing out and falling onto our dresses and the way we used to relish it without caring about the seeds sticking onto our cheeks is just nostalgic. It is an apt food loved by one and all, including the toothless – babies and the elderly. While some love to eat the fruit, the others blend it into juice forms. Well, who doesn’t love the taste of a melon on a hot sunny day? You are actually relishing water in the form of this melon. And melons are the best cure for sweltering.

Well, happiness can be found in various forms. But during summer, watermelons ensure that happiness is brought home.

Speaking to Star of Mysore, Babu, one of the vendors near Bannimantap Grounds said, “Big watermelons (light green ones) are known as Naati breed and grown in nearby villages and it is available only for about two to three months during summer. It takes about two months to grow the fruit and farmers put in a lot of work behind it. The size of this variety varies from 5 kgs to 15 kgs. The other variety is dark in colour and smaller in size – Sugar Queen which is syrupy and sweeter and reddish in colour. This is available almost for about eight to ten months in a year. This variety has more water content and its size varies from 2 to 6 kgs. 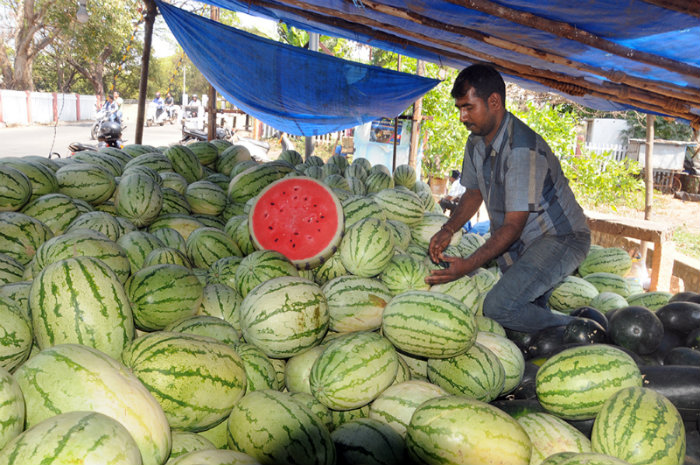 The easiest and the best way to relish watermelons is to dig your teeth right into the melon and feel the fleshy fruit ooze out juice into your mouth as you crush it with your teeth.

Melon with a musk…

Another health powerhouse to be consumed during summer is the musk-melon which has hydrating properties and efficient nutrients. One bite of the soft and succulent flesh of this fruit gives you a refreshing taste and sweetness that makes you want more. It is also known as cantaloupes or Karbuja, and shares similar properties as that of the watermelon. It is found in many varieties, shapes and colours and belongs to the Cucurbitaceae family. It was originated in the India, Iran and Africa whereas first cultivated in the Europe and then spread in various regions of the world. It is greatly found during summer season especially from April to August. It is a sweetest and amazing fruit having a cooling effect on the body. Its high water, minerals and vitamins content are great source of nutrition required to nourish the health. 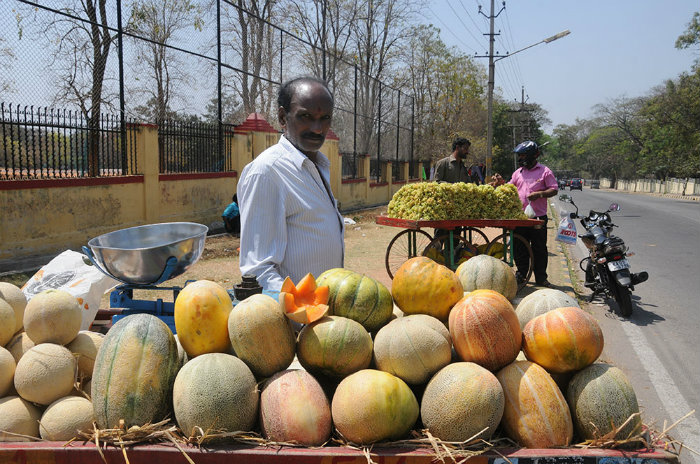 Mysuru APMC Sub Yard and market has been flooded with musk-melons since mid February.  Some people consume it directly while some chop it into chunks, soak it in jaggery syrup and then savour the fruit.

Not all grapes are sour

Fruits are an essential part of diet and grapes indulge your sweet tooth and satisfy cravings. The lush green seedless grapes and the long black, fleshy seedless variety can be consumed instead of junk food. Grapes are generally consumed post food and being summer season, their sales and easy availability has made it a super snack. 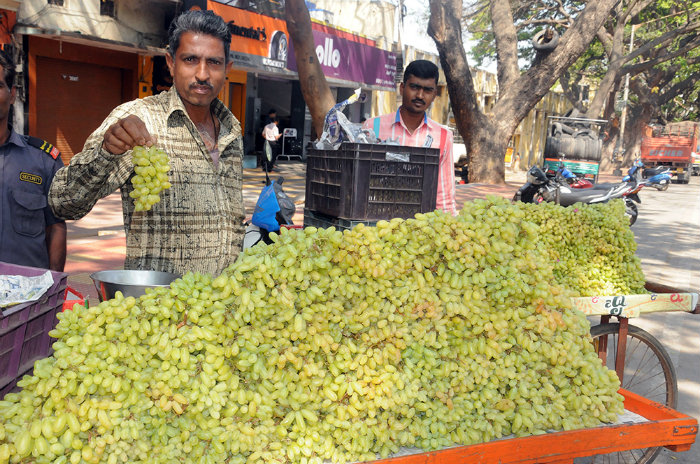 From being used in dishing out desserts and refreshing fruit bowls to being renowned as the primary ingredient in wine making, it is not without reason that grapes are known as the Queen of Fruits. Classified under the family of berries, grapes come in different varieties as well as colours— green, red, blue, purple and black.

The grape vine containing the cluster of berries are not only pretty to look at and delicious with its sweet and tarty taste, but are loaded with essential nutrients. 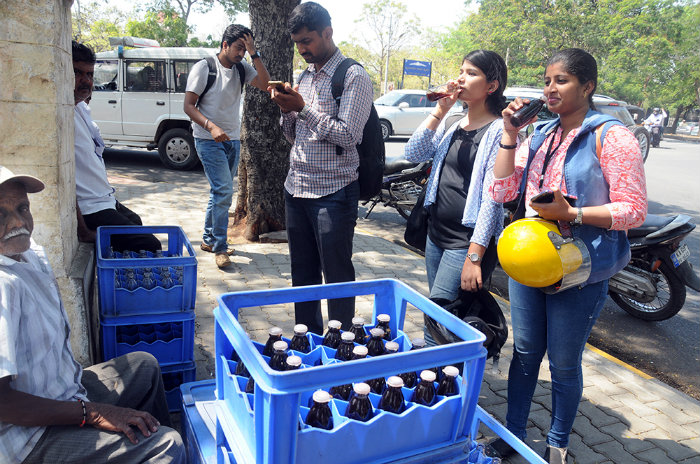 Time to immerse yourself in Citrus fluids

Orange being one of the prime citrus fruits is loaded with Vitamin C and builds upon the immunity of an individual. The orangey tang will make summer woes run for cover. The delicious juicy orange pulp is one of the favourite fruits that is sold in the markets of Mysuru.

A citric fluid is definitely going to tickle the tongue on a dull day. Known as Kittale Hannu in Kannada, this fruit helps lower cholesterol, prevents diabetes and boosts digestion. This fruit is generally preferred in its juice form. Students and other Mysureans throng several fresh fruit juice outlets in the city and orange juice notches the top spot. 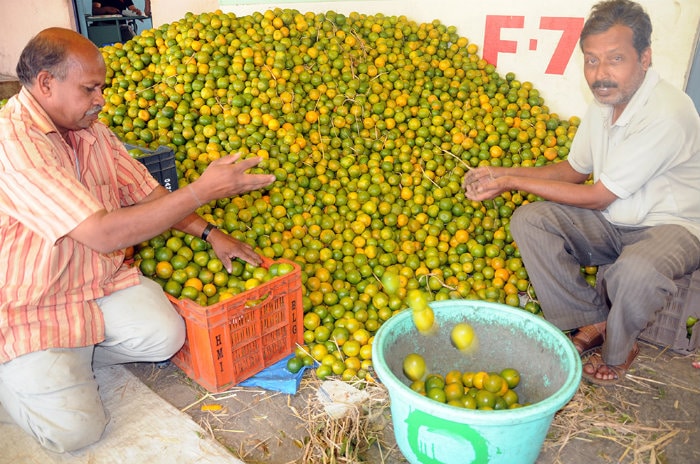 Lemon is another citrus fruit that is easily affordable and lemon juice is the most common fruit juice prepared in households. Some health-conscious individuals drink a hot glass of water with a few drops of lemon in the early morning to remove the toxins from their body.

Being summer, several sellers with their cart of Lemon Soda or locally known as ‘goli soda’ are making rounds in the city. Their cart is generally set up on busy streets during afternoon, and several pedestrians and motorists stop by and quench their thirst with the lemony drink. They mix the drink with salt and a pinch of pepper or chat masala and it comes in two variants – sweet lime soda and the salt lime soda.

As cool as cucumber and as tender as coconut

As soon as the sun starts blazing, knives gets engrossed in peeling cucumber or cutting the top portion of a tender coconut. Both of these have cooling effect and prevent prickly heats and summer boils. Be it vegetable salad or a dressing, or consuming it with the all-time famous Mysuru Churmuri, the presence of cucumbers is necessary. Sliced cucumbers are sold in and around the city and dressed with a pinch of salt to provide solace to the heated-up body.  They are alkalising and are an excellent source of silica that strengthens our connective tissues. They also help in eliminating uric acid and relaxation of muscles.

Tender coconuts are also popular in cities as it is an energy drink which comes at a reasonable price. Populalry known as Nariyal Paani in Hindi and Yelaneeru in Kannada, this pure and nutritious beverage contains minerals, vitamins and amino acids and is a natural source of electrolyte. Though both cucumber and tender coconut are sold all round the year, the consumption curve peaks upward during this hot season.

Fruits are an icing on the cake especially during summer. Fruit when cut into chunks contains a watery moisture on its layer that when eaten glides down your throat so smooth that even the stomach wouldn’t know and within no time a cooling effect is felt by your body.  A fruit will not be able to provide you a shade over your head but it will definitely provide a shade to your soul.