Home » Coronavirus Update » Cops are back on city roads 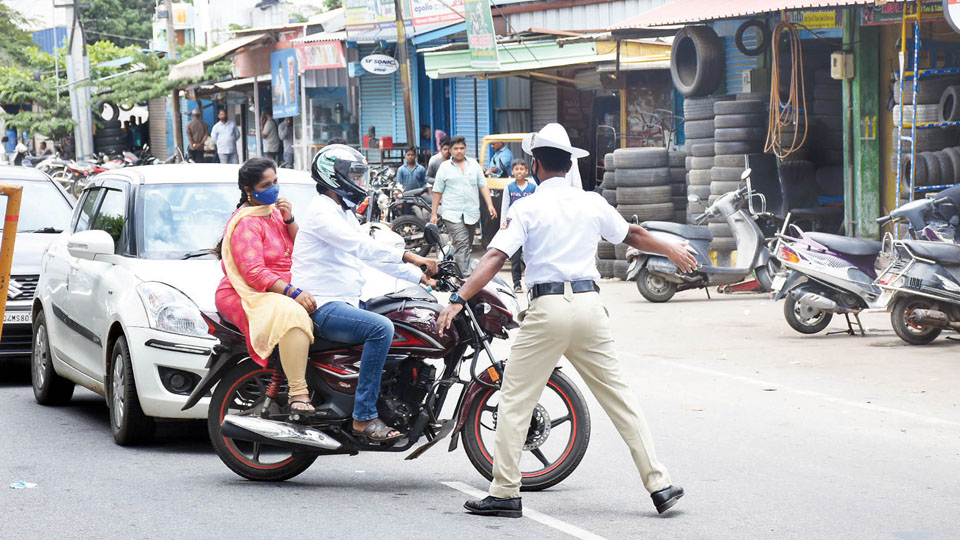 Cops are back on city roads

Mysore/Mysuru: With COVID-induced restrictions and weekend curfews, the city Traffic Police had stopped physical verification of commuters who flouted traffic rules. However, as the norms have been relaxed now, the Cops are back on the streets to flag down traffic offenders. And they have chosen the end of Ganesh Chaturthi as the start date for their drive against offenders.

The drive comes in the wake of repeated accidents, major and minor, rampant helmet-less riding, conversing on mobile phones while driving/ riding, triple riding on a two-wheeler, signal jumping and violation of one-way rules.

Special drives have been launched from each Traffic Station and are being monitored by the Traffic Sub-Division heads.

Though random checks were leading to slowing down traffic movement, the decision to resume random checking across the city was taken up as motorists are also ignoring repeated notices to pay outstanding dues, Police said.

“During the peak COVID season, the Police top brass had instructed the lower-level officers to stay away from physical verification as it was risky to stop vehicles and physically check every offender. However, with most of the guidelines being relaxed and traffic back on the city roads, they have been asked to keep a regular check on traffic offences and randomly check vehicle users for relevant documents, Department sources told Star of Mysore.

The random checking drive has been launched under the leadership of traffic ACP Gangadharaswamy and yesterday, the Narasimharaja Police were on the field from 11.30 am till 6 pm at Fountain Circle, near St. Philomena’s Church, Nehru Circle, Government Ayurveda College Circle, J.K. Grounds, Old RMC Circle and other areas where the traffic density is high.

Today, the drive was held at Devaraja Traffic Police limits and such drives will be conducted in all the limits of Police stations in the city. Individual Police Stations are selected each day for effective implementation and monitoring.

During lockdown and weekend curfews, the Police were digitally recording the offences and many cops were seen sitting or standing in a corner and taking pictures of traffic violators and then later sending the challans to their registered addresses. This, however, did not yield desired results forcing the Cops to resume physical checking. Even the digital system will continue to augment penalty collection, sources said.