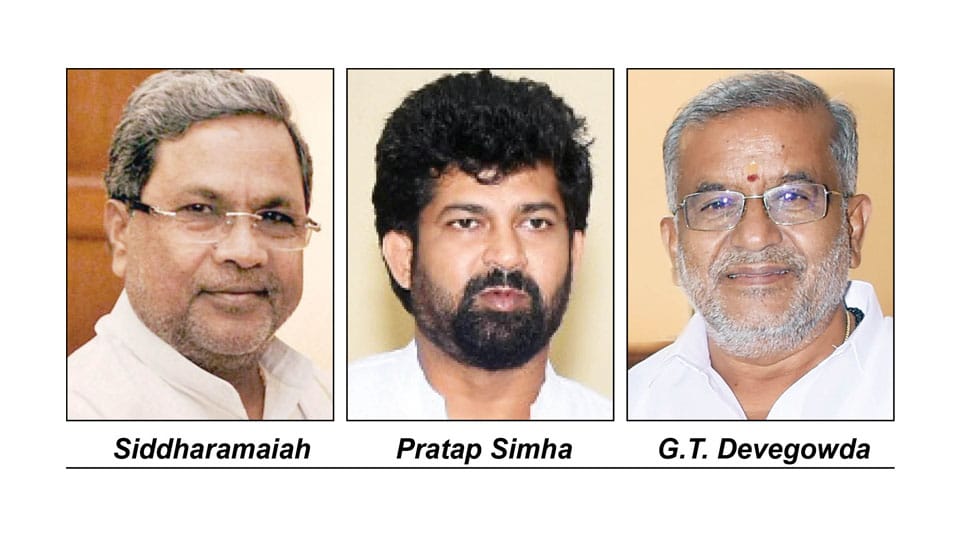 Mysore/Mysuru: The Mysuru District Administration and the Mysuru City Corporation’s (MCC) move to demolish over 93 identified illegal religious structures at public places including roads, junctions and parks has snowballed into a major controversy with leaders from all political parties taking objection to the move.

In August, State Chief Secretary P. Ravikumar had asked for a follow-up report on the pending demolition drive — based on the Supreme Court and High Court rulings — and the reasons behind the delay in implementing the order. Following the meeting, the District Administration and the MCC began the demolition drive and many roadside structures were razed in pre-dawn operations.

Mysuru-Kodagu MP Pratap Simha took severe exception to equating Temples with Churches and Mosques. Visiting the 101 Ganapati Temple at Agrahara and addressing the media this morning, he said, “Churches and Mosques cannot be weighed equally with Temples as they are just prayer halls.”

He alleged that the officers in the District Administration were targeting only Temples, leaving out the rest. “Officers must respect the sentiments of the public before deciding anything in haste. In the name of the Supreme Court order, many Temples have been razed. As per the Supreme Court guidelines, a review must be conducted before unauthorised religious structures are demolished. But here, the Mysuru authorities are not reviewing the structures and have outrightly demolished them,” MP Pratap Simha alleged.

MP Pratap Simha warned of launching a ‘Save Temples’ movement. “We have learnt that the authorities have decided to demolish the 101 Ganapati Temple on Sept. 22. This was constructed in 1955 and people from across the city and district have a virtuous bonding with the Temple for decades. The District Administration should not play with the emotions, attachments and religious feelings of the people,” he noted.

Speaking to reporters at an event in Ganabharathi this morning, Chamundeshwari MLA G.T. Devegowda lashed out against the District Administration for what he called targeting of Temples. “Do not test the patience of the people. If people revolt, will you be able to sustain it, he asked and demanded that the officers must analyse the Supreme Court and High Court directives before going ahead with demolition.

“No other district has been asked to demolish Temples and why only Mysuru is being targeted? Have the authorities followed the Supreme Court ruling on saving lakes? How many lakes and water bodies have they saved while honouring Supreme Court judgements? Have you evicted encroachments on even one lake,” he questioned.

Former Karnataka Chief Minister Siddharamaiah has condemned the demolition of an ancient Hindu Temple at Nanjangud and said that the BJP Government should have consulted the local residents before taking such an action, which has hurt the religious sentiments of the people.

“The destruction of an ancient Temple in Nanjangud is condemnable. Since it was a sensitive issue, the BJP should have spoken to the local residents. The demolition was done without the consultation with the people in the region and has hurt the religious sentiments,” he said in a series of tweets yesterday.

The officials concerned have not followed the due process, he said. “Though there was a Court order, the administration should have given a thought before implementing it (order),” he said in another tweet.

He demanded that a piece of land be earmarked to construct a Temple there to compensate for the demolition. Mysuru District officials, however, claimed they merely followed the orders sent for demolishing illegal religious structures, stating that the Temple was not on Archaeological Survey of India (ASI) maps and was only 12 years old.

2 COMMENTS ON THIS POST To “Demolition of illegal religious structures: Controversy erupts as leaders raise voice”