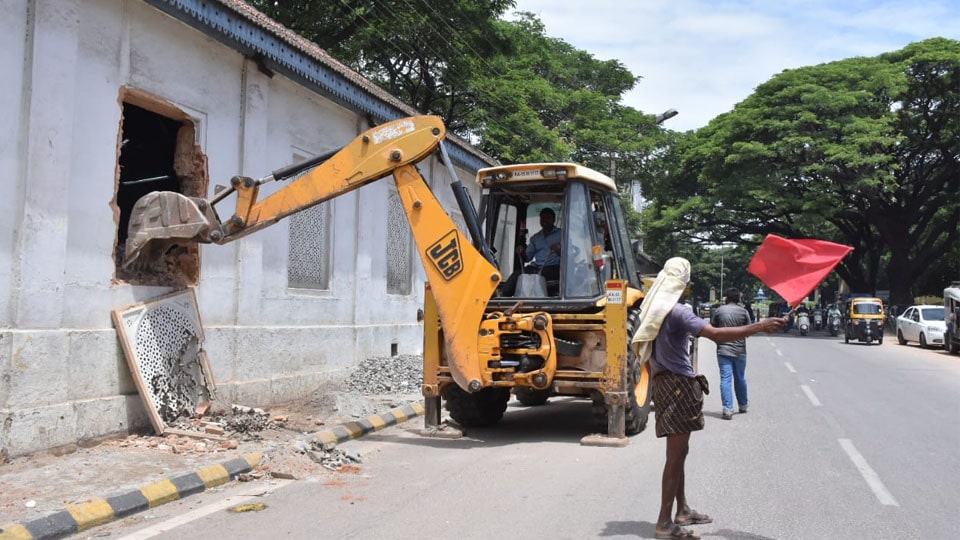 Mysore/Mysuru: The pending works on demolishing buildings (Nehru Circle till Government Ayurveda College) and widening of the entire Irwin Road began this morning after a long gap imposed by COVID-induced lockdown. Along with the demolition of remaining buildings, the works on road widening too has begun.

The City Police will soon close traffic movement on this stretch till the works are complete. The Mysuru City Corporation (MCC) has taken up the demolition of the 350-metre stretch between K.T. Street till Government Ayurveda College. Three earth movers were seen breaking down the walls of City Central Library this morning and the demolition of District Industries Centre will be next.

After this, the MCC has to take up the demolition of the remaining stretch from K.T. Street to Central Post Office (Nehru Circle). Among the contentious properties is the Jumma Masjid which was built by Nalwadi Krishnaraja Wadiyar in 1927 at a cost of Rs.38,000. Nalwadi had delivered the first sermon at the Masjid.

Though the MCC had demolished over 78 properties, 6 properties had remained on the road as the owners had refused to toe the line. Very recently, Prasad Nursing Home and Chitra’s Hospital located on the Road agreed to vacate to facilitate road widening. Even the suit filed against the MCC in the Court was withdrawn. This part of the property abutting the Road will be demolished in the coming days.

After this, the only contentious property is the Jumma Masjid. The Wakf Board that manages the Masjid has told the MCC that it does not want the compensation money but the MCC should build similar dome structure and minarets and also provide land in some other area to compensate the land loss to the Jumma Masjid. This issue has to be cleared at Government level and parleys are on, MCC officers said.

For the road widening and beautification, Rs. 47 crore has been provided under State Finance Commission (SFC) Grants. After widening, it will be a 60-feet (18-metre) road including footpath. The four-lane road will have a median on the middle and will have box drainage feature. The road will get a heritage character with ornamental lamp posts. Much to the relief of commuters, the road will be traffic jam-free stretch.

Movement of traffic on Irwin Road — from Nehru Circle to Sir M. Visvesvaraya Circle — Ayurveda Hospital Circle and vice-versa will be banned. Vehicular movement on Irwin Road was usual this morning even as MCC took up demolition work and works of road widening. Complete traffic ban is likely to come into effect as soon as the major works begin.