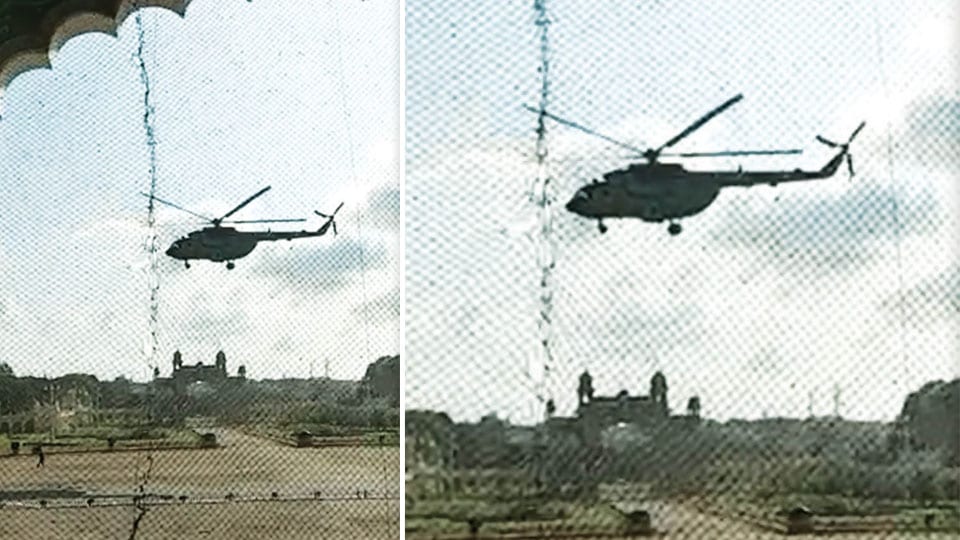 Mysuru: With rising threat of terror strikes across major cities in India, the elite National Security Guard (NSG) team has arrived in Mysuru and is conducting mock drills at vital installations and tourist spots since yesterday. The team is demonstrating its preparedness to tackle any exigency in the region. Today evening, the drill will be conducted at Mysore Palace.

Today’s security drill at the Palace will start soon after a ‘mock terror attack call’ is received at the City Police Control Room at 3 pm and the NSG Commando team will fly from NSG’s Chennai Regional Office in choppers and carry out the mock drill. The time taken to fly from Chennai and the time taken to complete the operation will be measured to improve efficiency and coordination in case of terror strikes.

Police sources said that the NSG is carrying out exercises at high security and vital installations in the city, which have been figuring high on the terror radar. Places which have traditionally been known to harbour terrorists and anti-social elements would witness such “awe and shock” exercises by the NSG in the coming days, sources claimed. The drills are a part of Republic Day (R-Day) security measure as there are intelligence inputs of a possible terrorist attack.

The mock drills began at around 3 pm yesterday and the base was set up in Chennai from where the exercise was coordinated and executed. Two choppers were used in the operation and attempts were made to land inside the Infosys and Wipro campus. The Lalitha Mahal Helipad was the base for the choppers. As the weather was declared ‘unfavourable’ by the coordinators of the mock drill, Commandos jumped out of the choppers using ropes.

The NSG team comprises the elite counter-terror squad and sources said that the Federal Contingency Force keeps doing these mock exercises to keep itself prepared for any contingency. The Special Forces is trained how to neutralise suspected terrorists and handle a hostage crisis.

It was probably for the first time that such a drill was conducted in city and more than 100 men participated.

Apart from the NSG, Anti-Terrorist Squad, State Garuda Team, Internal Security Force, Mysuru Commando Force and Mysuru Police participated in the drill. Later, training on security measures to be adopted in case of a terror strike was provided to over 600 Policemen and select government officers in Mysuru.

Mysuru has many national, defence assets

Apart from attracting millions of tourists every year, Mysuru has many nation-building firms that are a national asset.

They include Central Food Technology and Research Institute (CFTRI), Defence Food Research Laboratory (DFRL), Railway Division Office, Reserve Bank of India’s currency printing unit, and Air Force Selection Board. This apart, Mysuru has huge IT campuses of Infosys and Wipro and in the wake of terror threats, there is an urgent need to secure and sanitise these places.

The drills continued till late in the night with helicopters flashing lights flying over to residential areas to and fro the Lalitha Mahal Helipad, Hebbal, Bannimantap, Kesare, Vijayanagar, Vontikoppal and Gokulam.

The choppers flew at low altitude and many residents came out on their terraces to see the flying machines. After the drill, the NSG commandos flew to Chennai.

Tight security measures were in place where the security drills were conducted and public was not allowed inside. The drill is scheduled to begin at Mysore Palace at 3 pm and public entry has been restricted. Today’s drill will be conducted under the leadership of City Police Commissioner K.T. Balakrishna, Deputy Commissioners of Police (law and Order M. Muthuraj, Crime and Traffic B.T. Kavitha) and Devaraja Sub-Division ACP Shashidhar.

At the Palace, the NSG commandos are expected to give suggestions and directions for improving the security at the Palace. The commandos are also scheduled to visit Mysore Airport. The team of commandos have already interacted with the officials and engineers of the Palace Board.

The commando team provided training to officials of a few important government departments and local administration to tackle terrorist activities. They were also be trained how to co-operate with the NSG team during terror strikes.