Home » News » COVID-19: No holiday for Schools in District 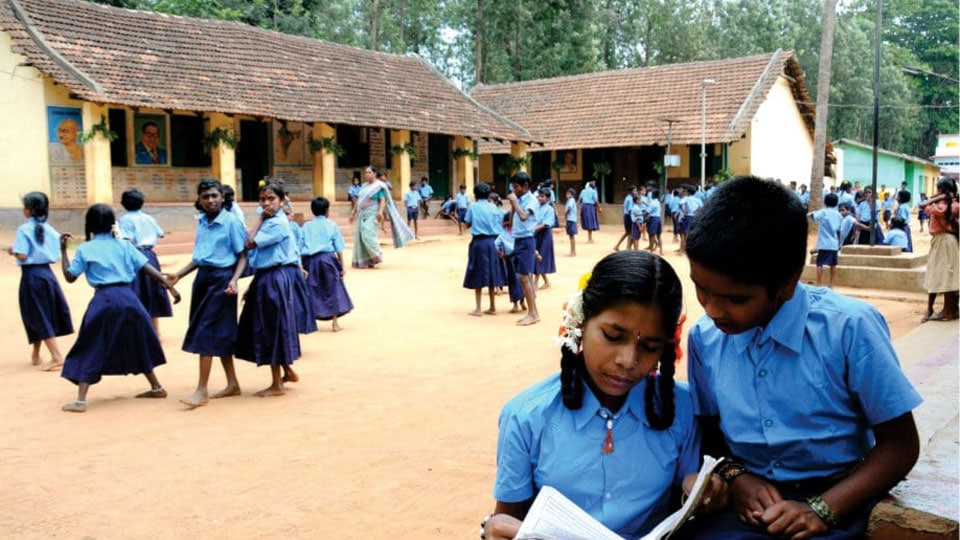 COVID-19: No holiday for Schools in District

Mysore/Mysuru: Even as Karnataka reported its first COVID-19 case in Bengaluru yesterday and with the State Government announcing a week-long holiday (Mar.10 to 17) for classes from Pre-Nursery to 5th standard in BBMP and Bengaluru Rural District limits, the Education authorities in Mysuru said there will be no such holiday in the district.

Speaking to Star of Mysore this morning, DDPI Dr. Panduranga said that there was no directive from the Government so far on shutting down Primary Schools in the district due to coronavirus scare. Likewise there is no instruction from the District Administration either. However, the DDPI has instructed all BEOs and School Head Masters to ensure that students do not gather in large groups  and that no prolonged meetings are held by the Department authorities. Also, he has asked the officials to suitably split the issues that come up during meetings if they are too long, as a precautionary measure.

Dr. Panduranga further said that the Department of Public Instruction at Bengaluru has directed all Schools across the State, with the exception of Bengaluru, to advance the academic (2019-20) calendar.

The Schools have been asked to complete the academic year early, he said and added that, the time-table for Class 10 (SSLC) examination will remain the same.

At University of Mysore

The Department of Studies and Research in Philosophy, University of Mysore (UoM), has postponed the two-day seminar on Buddhism scheduled for today and tomorrow, due to COVID-19 scare.

Speaking to SOM this morning, UoM Vice-Chancellor Prof. G. Hemantha Kumar said following a directive from UGC, the University has asked all the Departments to ensure that no more than 100 students gather at a place at a time as a safety measure. Also, the Departments have been instructed not to hold seminars, workshops and other academic programmes till Mar. 20 besides asking them to postpone such events if already planned.

The Mysore Airport at Mandakalli has taken necessary safety measures.

Speaking to SOM  this morning, Airport Director R. Manjunath maintained that Airport authorities have taken precautionary measures. Pointing out that all inward and outward bound passengers are being screened, he said that the State Health Department has deputed doctors along with necessary equipments to conduct screening of passengers at the Airport. So far, no passenger with coronavirus symptoms has been detected at the Airport, he added.

Health Department all geared up

District Vector-Borne Diseases Control Officer Dr. Chidambara said that no person has been tested positive for the deadly virus so far in the city and in the district. Speaking to SOM, he also said that the health authorities are taking nothing for granted and have all mechanisms and measures in place to  control the spread of the virus and also to prevent any possible outbreak of vector-borne diseases. Explaining the measures taken by the Health Department, he said that all tourists and passengers entering and leaving the city are being screened at public places such as Railway Station, Bus Stands, Taxi Stands, etc. Also, commuters are being screened near check-posts along Kerala border and the health officials are visiting tribal hamlets and meeting forest dwellers to educate them on the deadly virus and the safety measures to be taken to maintain hygiene and cleanliness. The people in general have been asked to immediately consult a doctor if they have fever, cough, respiratory problems, sore throat, etc., which are the likely symptoms of COVID-19, he said and asked the people not to panic unnecessarily.

The Railway authorities said that the Department has been educating commuters on coronavirus. Pointing out that messages are being telecast regularly on TV screens installed at the Railway Station, they said educative pamphlets are being distributed among the commuters.

Meanwhile, amidst the COVID-19  scare, the city remained normal, with cinema halls, malls and other public places carrying on with their business as usual.

Dead chicken and cranes cause scare

Even as the authorities have taken appropriate measures to prevent COVID-19 outbreak in city, the sudden death of 15 chicken at Metagalli and the death of two cranes near Hebbal Lake on city outskirts this morning has been a cause of worry for the citizens.

Reacting to the death of these birds, Veterinary Department Deputy Director Dr. Ajith Kumar said that prima facie found that the chicken have died due to a disease known as ‘Ranikhet  disease.’ The viscera samples of all the dead chicken and the cranes have been sent to the Institute of Animal Health and Veterinary Biologicals at Bengaluru for tests and the exact cause of the death will be known only after the Department receives the lab report, he said.

In the wake of coronavirus scare, the Ministry of Communications (Telecom), through various government and private cellular network providers, has been continuously issuing alerts via SMS and through voice alerts, like caller tunes on everyone’s cell phone and also landlines.

The SMS alert reads “Novel Coronavirus spread can be stopped. Cover your mouth properly while coughing and sneezing. Wash hands with soap frequently. Avoid touching your eyes, nose and mouth. Avoid close contact with anyone with cough, fever or difficulty in breathing. If required contact nearest health facility or dial helpline Phone No: 011-23978046.’