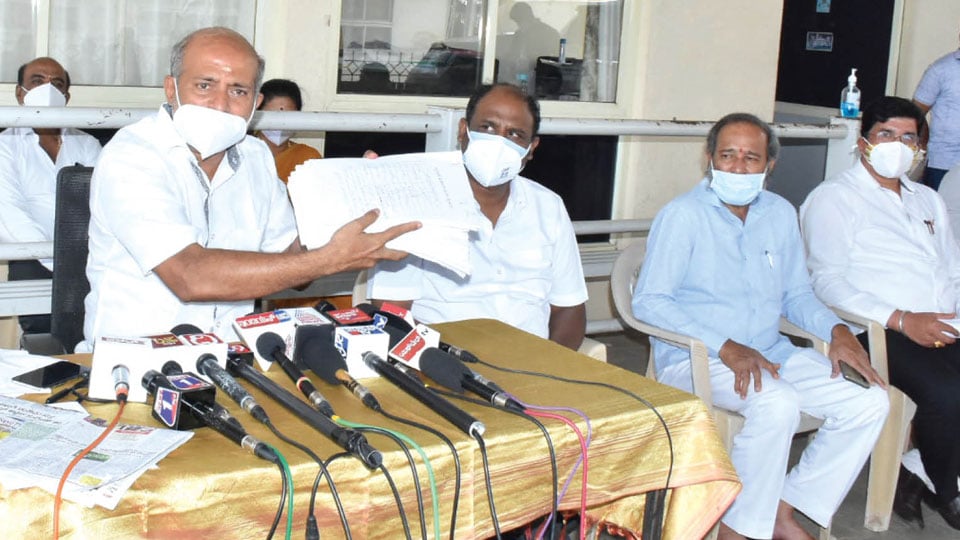 Addressing a press meet at his Office near Ramavilas Road here this morning, Mahesh, who was also a Minister in the previous JD(S)-Congress coalition Government, contended that he was not making allegations, but was only coming up with facts and figures on the actual number of COVID deaths reported in the district from May 1 to 29 with document proof, which he has collected from hospitals and designated COVID crematoriums.

Claiming that 969 COVID patients died from May 1 to 29, he said that the District Administration had reported only 238 deaths in this period to the Government.

Arguing that the authorities had reported just about 25 percent of the actual deaths (238 out of 969), Mahesh wanted to know the fate of 731 deaths which were not reported. Citing an example, Mahesh claimed that the district authorities reported only 2 deaths to the Government, while 23 deaths were recorded the same day. Likewise, only 19 deaths were reported on May 29 as against the actual figure of 23. Accusing the authorities of hiding the actual figures from the Government, Mahesh said that such actions amounted to fooling its own people.

Targeting Deputy Commissioner Rohini Sindhuri without naming her, Mahesh said that he had told about the wrongdoings of the DC much earlier. But it seems that the Mysuru-Kodagu MP from the ruling BJP has now realised this, he said.

Pointing out that former Congress MLA Somashekar too has charged the District Administration of misleading people by gross under-reporting of COVID deaths in the city and district, he wanted to know why the District Administration was fudging statistics on COVID  figures. Alleging that more than 3,000 people of the city and district have died of the deadly pandemic since the outbreak last year, he said that Government records show only about half the number.

READ ALSO  More than 60 lakh doses of vaccines will be administered in June: CM

Wondering what would be the fate of the families of the dead who find no place in Government records if the Chief Minister or the Prime Minister were to announce a compensation anytime in the future, he questioned why the authorities were making false submissions to the Government on COVID deaths and cases.

Arguing that such false submission to the Government amounts to violation of human rights, he wondered what the Chief Minister, the Chief Secretary and other authorities were doing. He urged the Government to order a high-level probe into the matter.

He also took a dig at the Government’s claims on declining  COVID positivity rate, saying that COVID tests have been deliberately  capped to show that positivity has come down.