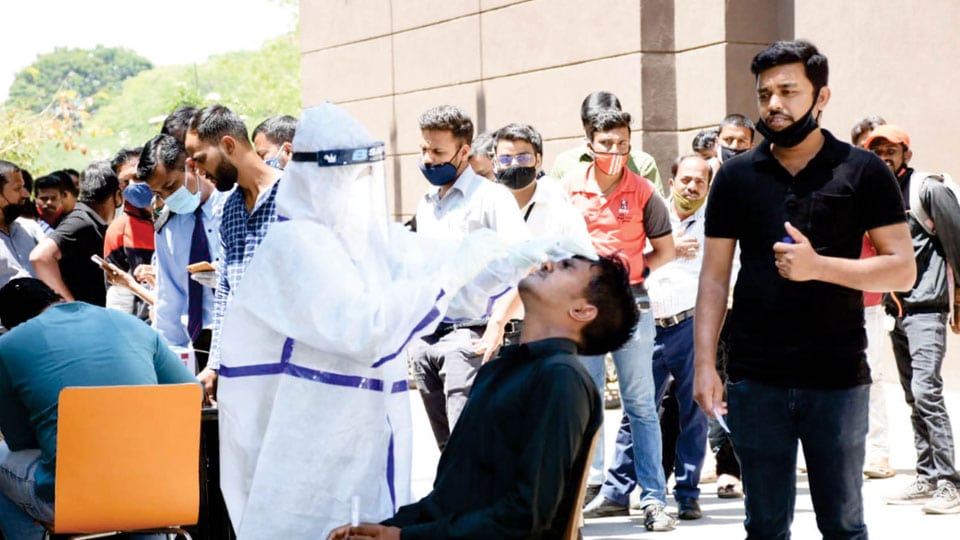 Mysore/Mysuru: The District Health Department has intensified RT-PCR testing at various locations in city since this morning following directions from the State Government in the wake of spike in Corona positive cases.

Till last month, the district was given a target of 4,200 tests per day but it was subsequently reduced to 3,200 tests due to decline in Corona positive cases. However, cases have gone up sharply in several districts including Mysuru, forcing the Government to ramp up testing. Mysuru has now been given a daily target of 5,000 tests, he added.

Stating that number of people visiting the COVID-19 testing booths have declined in the last 10-15 days, Dr. Siraj said that the Mysuru City Corporation (MCC) Commissioner has been requested to issue a circular asking the shop-keepers at Devaraja Market to undergo another round of testing.

The shop-keepers at Devaraja Market can undergo another round of testing at the existing testing booth near Chikka Gadiyara (Dufferin Clock Tower) from Monday, said Dr. Siraj Ahmed, Nodal Officer for COVID-19 Testing and Reporting.

Besides, Joint Director, Department of Industries, will be requested to issue directions to all factories to get tested for Corona virus. Those who require negative report to go abroad or undergo surgery were  coming voluntarily for testing, he added.

He said testing may be started for students of degree colleges and nursing colleges as precaution. A majority of nursing students were not ready to undergo testing claiming that they have taken vaccine. The challenge before them was to convince students to take RT-PCR test afresh, he added.

Dr. Siraj said that private hospitals must co-operate with the District Health Department by asking persons with symptoms of Influenza like Illness (ILI) and Severe Acute Respiratory Illness (SARI), to undergo a free RT-PCR testing at Government facilities.

Since most of the private hospitals are busy in vaccination drive, not much attention was given towards testing. It was possible to bring down the positive cases if both Government and Private Hospitals come together, he added.