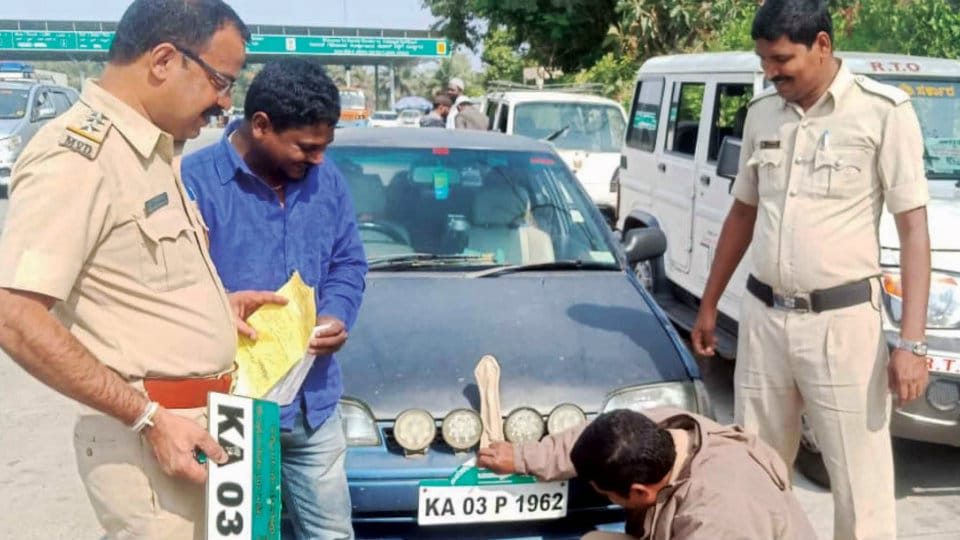 Mysuru: Road Transport Department officials have launched a drive against vehicle owners who use faulty, fancy and illegal number plates. Those using illegal Government emblems and logos are also facing the same fate. The drive was launched in the city yesterday.

It may be recalled here that SOM had published a report on Dec.22 under the title “Remove illegal number plates in a week, motorists warned.”

The Department is taking strict action following the Section 50 & 51 of the CMV rules 1989. The rule says, “Except registration marks of the vehicle, any other names, and pictures shall not be displayed on number plates.” He said usage of Government symbols and emblems without proper authorisation will also attract action following the Emblems and Names (Prevention of improper Use) Act 1950.

This enforcement is being carried out by a joint team of Transport Department officials, he said. He warned that those found to use improper number plates will be fined Rs. 500.

This drive comes after the Department on Dec.20 had issued a notification. The notification had mentioned that the number plates should have a standard colour of fonts, plate, content, font size and clarity. All numbers should be black on white for all non-commercial vehicles, including two-wheelers, and similarly, all commercial vehicles should have boards in yellow with black letters or digits.

“The size of registration mark and numerals to be displayed on number plates should be as per Central Motor Vehicles Rules. The letter of the registration mark should be in English and figures in Arabic numerals,” he said. Some of the plates in question had the numbers inscribed on the licence plates in vernacular or written in fancy fonts that would make the digits appear like words.