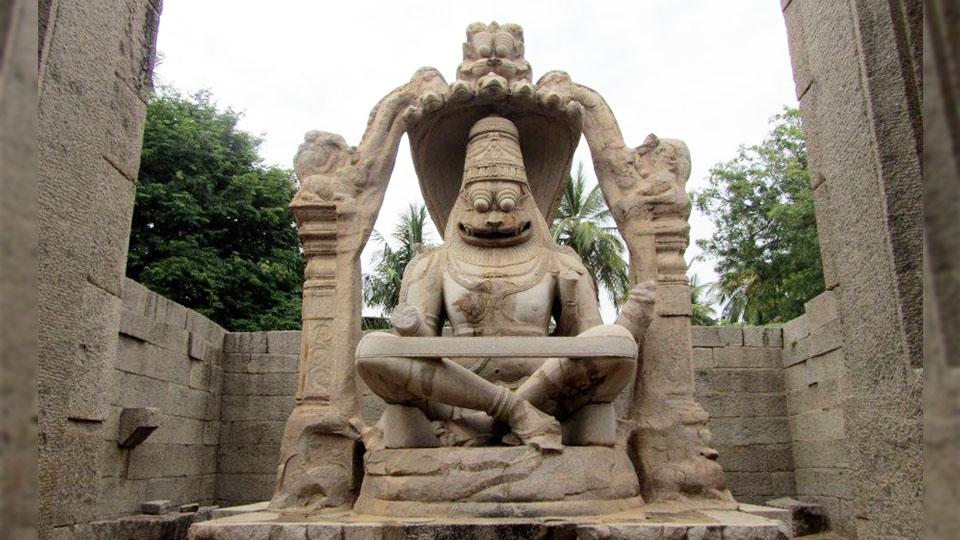 The Cult of Lord Narasimha

It was a pleasant surprise that on Tuesday (9.5.2017) all the TV channels beamed only the programmes celebrating the birth (Jayanti) of Lord Narasimha. Actually, the programmes were there from early morning till late in the night. In fact I and my family were glued to the TV as we did not like to miss any item beamed.

Another unique feature was that practically all temples of South India comprising Karnataka, Andhra and Tamil Nadu were shown on the TV. I felt that the whole of South India had become the abode of Narasimha. Even a historian like me forgot history and chronology and was concentrating on the temples and images. Some of them I had visited long back and many were new to me. Our family had a special devotion to God Narasimha and naturally we were absorbed in this devotion.

God’s incarnation is a unique concept in our tradition and culture. It assures the tormented or troubled person a hope and assurance that justice would be done to good people and wicked people would be punished. All our epics are good examples for this unique concept and that is the reason why our epics are still alive and not obsolete literary works.

Coming back to the concept of incarnation it has to be noted that the first three are related to animals and the fourth one is a combination of animal and human and from that point of view of history, this concept was not known during the Indus Valley Civilisation. It is found mentioned in Taittirya Aranyaka, a part of Vedic literature. There is an Upanishad called Mahanarayana Upanishad and Narasimha is mentioned in this text. In course of time, many Upanishads developed around Narasimha. In one of these Upanishads, Mahavishnu is called as Narasimha and this shows the supremacy of this God as early as when this literature was composed.

Mahabharata has a reference to God Narasimha. In fact a work called Mansu Sukta is an authentic source for understanding the concept of this God. A large number of Puranas refer to the details of this God and this shows that he had become a popular and important deity in the early period. Other Puranas like Matsya, Vayu, Brahmanda, Agni, Padma and Vishnudharmottara contain details of the concept of Narasimha. These are dated to about 4th century AD in both North and South India. The great Alwars of South India have sung in praise of Lord Narasimha.

However, the most important and popular verses in favour of God Narasimha were composed by Adi Shankaracharya. They are popularly known as Karavalambana stotra and are recited even today in temples and homes on the Narasimha Jayanti day.  Sri Ramanujacharya was also a devotee of Lord Narasimha and he encouraged many kings like Hoysala Vishnuvardhana to build temples for Narasimha. Another saint Sri Madhwacharya also popularised the worship of Narasimha.

All these were done but Sri Hari saved Prahlada each time and Hiranyakasipu became helpless but his wrath against Vishnu increased. The snakes that came there to bite Prahlada became harmless; when he was tossed from the hill tip, he was not even hurt and escaped as a flower. Thus Narayana was saving his devotee from the cruelty of Hiranyakasipu. The latter could not tolerate all these things and one day he called Prahlada and said if your Narayana is all powerful let him come and save you now. He showed a pillar and asked if your Narayana is available in this pillar, let him come out and save you my son. Otherwise I myself will kill you.

Without waiting Narasimha broke the stone pillar and came forward and carried Hiranyakasipu and placed him on the threshold (hosilu of the Palace) which was neither inside nor outside; the time was neither day nor night; and Narasimha carried him on his lap and opened his belly. He did not use any weapons but used his nails only and killed the demon Hiranyakasipu.

Devout Prahlada requested Narasimha to calm down and give darshan to him in his peaceful attitude. Everybody in heaven felt very happy as also people all over various worlds. They all thanked Prahlada because of whom a bad demon was killed and Dharma was established. In fact the motto of any civilised society is to free the world of wicked people and protect good people. This was our tradition and it was fulfilled in ample measure.

In our tradition God is one but he assumes different names and roles while protecting people. Ahobila or Ahobala is a kshetra par excellence for Narasimha worship. It is in Kurnool of Andhra. There are at least fifty forms of Lord Narasimha depending upon the objects he holds in his hands and the feats he performs. Our own city has many temples of Narasimha: one is in Jayalakshmipuram guided by Sri Karagam Yoga Narasimham and the other is in Vijayanagar developed by Dr. Bhashyam Swamiji. Another one is on Ramavilasa Road called Ahobila Narasimha temple. One more is in Srirampura.

Hampi is famous for huge Narasimha temple and the image. Lord Narasimha made an impact on many dynasties including the Mysore royal family. Many kings had the name Narasimha as part of their names. Hoysalas, Vijayanagar rulers, Mysore Wadiyars minted coins in gold and silver with the portrait of Narasimha. We had a Prime Minister by name Narasimha Rao. Thus we show respect to this God in a variety of ways.

Though Narasimha flourished in a different yuga, he is relevant even today. That is the strength of our tradition which is greatly required at present.

2 COMMENTS ON THIS POST To “The Cult of Lord Narasimha”