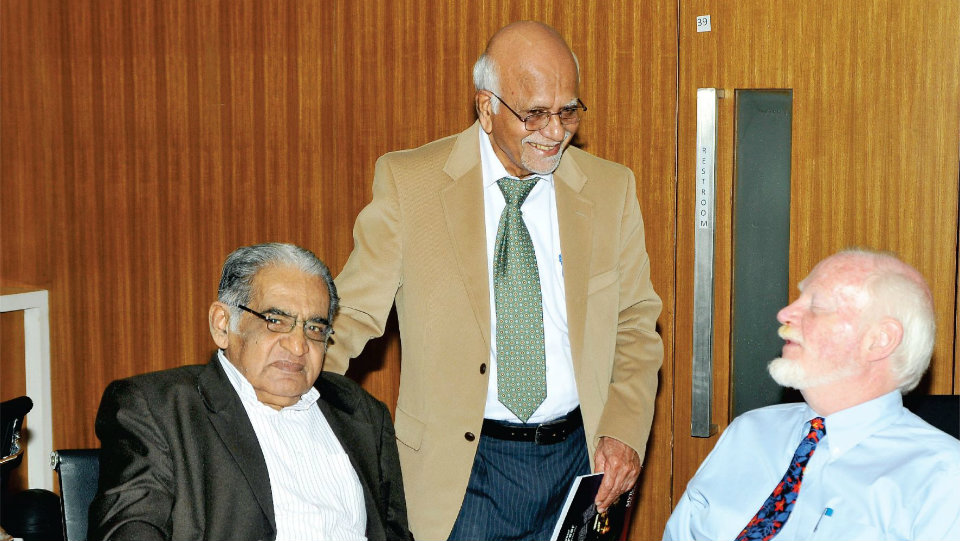 It was a surprising and happy moment for Prof. James Manor of London University, who was in Mysuru to deliver a lecture on D. Devaraj Urs at MYRA School of Business on Aug. 21, under the aegis of Devaraj Urs Centre for Development Studies (DCDS), when I met him.

I went to attend his lecture as I had briefly met him nearly 25 years ago in his Chambers at the Institute of Development Studies, University of Sussex, UK, as I was there for an advance training programme on Gender Planning. It was a great surprise then for me to come across a big poster-size photo of Devaraj Urs pasted in his Chambers. 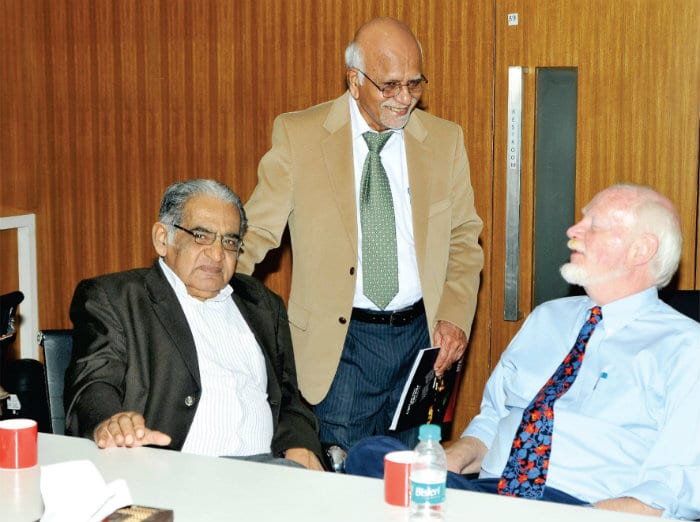 With Prof. James Manor recollecting my meeting with him in UK. Prof. V.K. Natraj, his long-time friend and also my college-mate, is also seen.

And I had written about this experience in this column much later (26 July, 2013) under the title given above. Incidentally, he was touring Karnataka then studying the outcome of Assembly elections.

Before the lecture on that day at MYRA when I was introduced to Prof. James, I told him about my meeting him in 1993 without giving details and naturally he could not remember it nor recognise me. But, he expressed his surprise, as we all immediately adjourned for his lecture.

It was my first visit to this Business School — MYRA: Mysore Royal Academy – true to its description ‘Truly Global, Uniquely Indian’ with known global visiting faculty as well  as eminent resident faculty. It was established in 2010 by city’s Prof. Shalini Urs and her husband Dr. D. Shrijay Devaraj Urs as Executive Director, both from University of Mysore.

It is thoughtful of this couple to house DCDS in this Business School and indeed a real tribute to the memorable contribution made by Devaraj Urs to the backward people when the State is celebrating his Centenary. 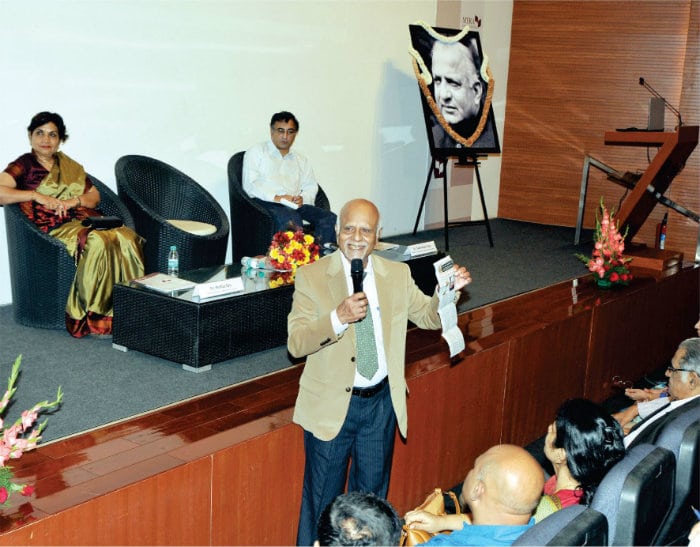 Telling James and the audience about the contents of my column in SOM displaying the clipping.

Prof. James Manor, who is very familiar with Mysuru since he had chosen the District for the Field Study of his Ph.D earned at the University of Sussex, had learnt Kannada during his field visits. He had conducted in-depth studies in Karnataka for over 40 years particularly choosing Devaraj Urs period describing him as a ‘Social Reformer’ who stood as a champion for poor and downtrodden lending a voice to the oppressed. That is how he came down from London to deliver the lecture on “Devaraj Urs: Pioneer of Progressive Politics.” His hour-long honest analysis of Devaraj Urs’ long-lasting contribution to the less privileged class proved that he was not just a Chief Minister after power, said Prof. Manor.

After his talk, I stood up mainly to break his surprise giving the reason of my meeting with him at Sussex University. I then showed the audience clipping of my column from Star of Mysore about the display of Devaraj Urs poster-size photo in his Chambers.

With a broad smile, he revealed that a larger-than-life picture of Devaraj Urs adorns his office at London University also after moving out from Sussex University and appreciated the write up in SOM in my column, which I gave it to him to carry and he gladly accepted keeping it in his briefcase.

Thus, it also became an occasion to know through the column in Star of Mysore, how Devaraj Urs’ name and fame made known outside the country, particularly in England by Prof. James Manor. One of the grand-daughters of Devaraj Urs, who was present was perhaps too happy to know about her grandfather’s popularity.