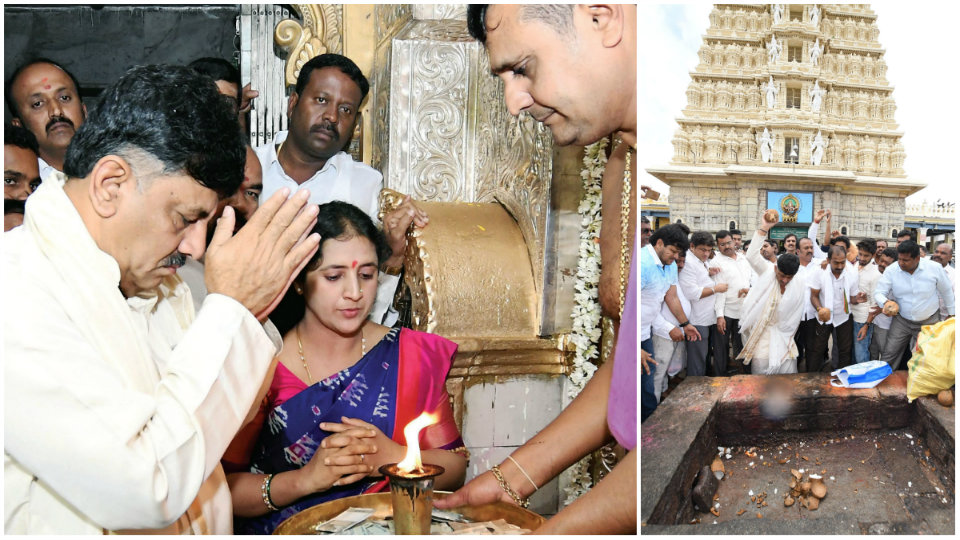 Mysuru: Energy Minister D.K. Shivakumar, in his first visit to the City after the recent Income Tax raid, in a veiled threat said that even the Congress had in its armoury, weapons, to fight against BJP’s ‘politically motivated’ actions.

He was addressing mediapersons after performing pooja to Goddess Chamundeshwari atop Chamundi Hill, here this morning and said that he had prayed for the welfare of the State, good of the people and also his own well-being.

Asked for his reaction on the raid by the Income Tax officials on his properties in 70 locations in Karnataka and Delhi, Shivakumar said that he was pained more at his relatives and others being targeted than the raid on him.

Asked whether the raid was deliberate, as even Chief Minister Siddharamaiah had termed it as one, he said that it carried a lot of significance that the CM himself had said so.

To another question that even as he was offering pooja, the raid was going on in Bengaluru at one of his friend Vijay Mulugund’s house, Shivakumar said, “I still do not know about it. I did watch it on TV. But Vijay Mulgund is a very good, simple man is all I can say at this moment.”

To a query from one of the journalists that there were rumours doing the rounds that following the IT raids, his defences had crumbled and he was planning to join BJP, Shivakumar chose not to react and said that it was not the time to discuss about such issues.

Regarding Cabinet expansion, he said that the Chief Minister will have to take a decision on that issue and he would not like to comment.

Earlier in the day, Shivakumar visited his father-in-law Thimmaiah’s house at Ittigegud and later accompanied by his wife Usha Shivakumar reached the Chamundeshwari temple.

Later, he left for Gundlupet to participate in the events where Chief Minister Siddharamaiah is inaugurating a slew of development projects.