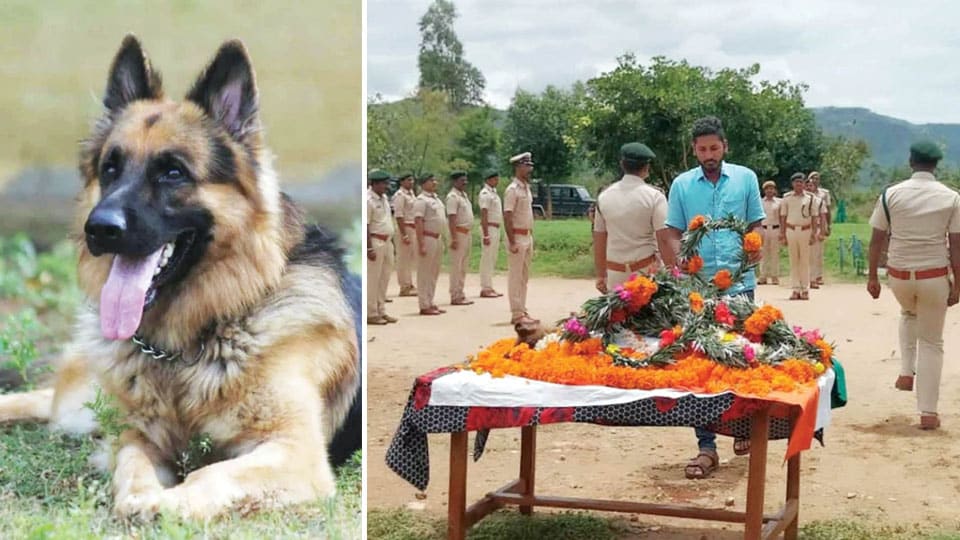 Daring ‘Rana’ of Bandipur passes away

Mysore/Mysuru: German Shepherd Rana, who was the first member of the Canine Squad of Karnataka created for wildlife crime detection, passed away at Bandipur Tiger Reserve this morning. He was a true green warrior and protected the rich flora and fauna of Bandipur for over 10 years.

He was 12 to 13 years old and was trained by the Army when he was just six months old. Rana died of old age. Even after his retirement two years ago, Rana continued to serve the Forest Department and the Special Tiger Protection Force (STPF) and he was being taken care of at the STPF campus at Bandipur.

Bandipur Tiger Reserve Director Dr. P. Ramesh said that nobody can replace Rana. “He had solved over 80 cases of poaching, sandalwood theft, animal snare cases and others. He was a master and an ace in solving tiger poaching cases and finding weapons,”  the officer said.

Rana played a key role in many wildlife operations and was a nightmare to poachers. He had caught poachers at their homes by following their scent from the jungles.

In one such tiger poaching case at Nagarahole Tiger Reserve in 2020, Rana followed the scent of five poachers and led the Department personnel to a house in South Kodagu where the tiger claws and canines were stored. The then Union Minister for Forest and Environment Prakash Javadekar had lauded the operation.

Rana has solved many sandalwood smuggling cases and had tracked those who had escaped with the claws of ‘Prince,’ a popular male tiger of Bandipur.  Many cases of wildlife seizures and poaching detected by Rana have enabled the Department to arrest many criminals and helped the recovery of body parts including skins and bones of tiger, leopard, bear bile, ivory, star tortoise, deer antlers, skins and meat, live birds, porcupine, pangolin scales, snares, traps and weapons.

Officers recalled that in a recent tiger attack case at Mudhumalai Tiger Reserve where a tiger had killed a farmer, Rana tracked down the tiger’s location deep inside the jungle with the scent he had picked up from the farmer’s dead body.

Rana joined the Forest Department in 2014 and was trained in Dog Squad, Special Armed Forces, 9th Battalion in Bhopal. During his service, Rana was given the rank of a Deputy Range Forest Officer and was given an exclusive jeep and all other facilities that are given to a forest officer. He even had a Service Register.

According to his handler Prakash Honnakore, Rana recently suffered a severe tick infection and survived. As the news of his death spread, many officers and staff arrived at the STPF campus to offer their last respects. ACFs and RFOs of many divisions in Bandipur too paid their respects.

A State funeral has been accorded to Rana to commemorate his contribution to the Department.