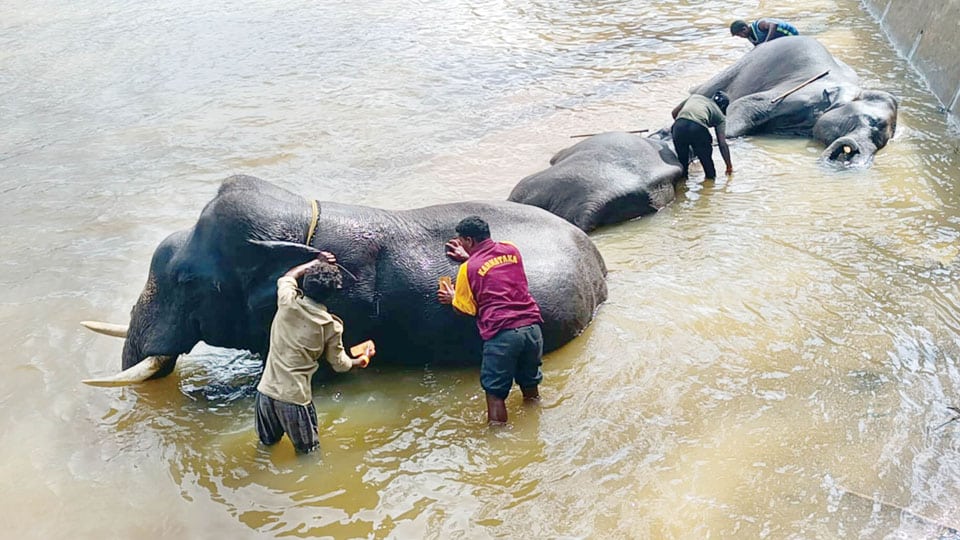 Gajapayana on Aug. 7 to herald Dasara

We will release Government-owned elephants but we will not come to Mysuru: Mahouts Association

Kushalnagar/Mysuru: With the threat of a Dasara boycott by Mahouts and Kavadis seeking fulfilment of their long-pending demands, Forest Department is making preparations for a grand Gajapayana — the traditional march of elephants from forest camps to Mysuru — on Aug. 7.

The Gajapayana will begin in the auspicious Kanya Lagna between 9.01 am and 9.35 am at Veeranahosahalli in Hunsur taluk, bordering the Nagarahole Tiger Reserve. The elephant team will be led by Abhimanyu, who will carry the Golden Howdah during Vijayadashami.

A host of dignitaries including Mysuru District Minister S.T. Somashekar and MLA H.P. Manjunath will attend the ceremony and notably, this year, the State Government has decided to celebrate Dasara in a grand manner.

The jumbos will be brought in trucks to the Aranya Bhavan in Mysuru on the same day.

Mahouts not to accompany elephants: Amidst Gajapayana preparations, Mahouts and Kavadis of elephant camps have sought higher salaries for their work and said they may consider staying away from this year’s Dasara festivities if their demands are not fulfilled. In a series of meetings since a fortnight or so at Dubare and Mathigodu elephant camps, they have made their stand clear.

Venkatesh of Mahouts and Kavadis Association told Star of Mysore this morning that the elephants are Government property but Mahouts and Kavadis are not. “We will release the elephants and we might load them onto trucks. But we will not accompany them. Let the officers train the pachyderms and make them Dasara attractions. We will not budge as all our demands are legitimate and have been ignored by successive Governments all these years,” he said.

He said they would wait for the Government to look into their demand and claimed that their demands weren’t considered despite making appeals almost every year.

Chief Conservator of Forests (CCF) Murthy visited the Dubare camp yesterday and tried to convince Mahouts and Kavadis but to no avail. Department sources, however, claimed that their demands will be met within a day or two.

While the Kavadis are seeking a salary equivalent to a Forest Guard, Mahouts are demanding wages equivalent to a Deputy Range Forest Officer (DRFO). “The Finance Department says that it will cost Rs. 96 lakh per month if our demands are met. This amount is less when compared to the service we give the Government,” he said.

“Once we leave the elephant camps, we come under the administration of Mysuru officials and we cannot narrate our problems. The officers will not listen too. Moreover, no officer is ready to take responsibility. Not leaving the camps unless the demands are met is the best option for us. We do not want verbal assurances but demand that the Government give it in writing, agreeing to our demands,” Venkatesh added.

Speaking to Star of Mysore, sources from the Dubare Elephant Camp said that from the camp, Cauvery, Dhananjaya, Vijaya and Vikrama will make it to the first list of elephants that will reach Veeranahosahalli. The catch, however, here is Vikrama is in musth condition.

Other elephants shortlisted from Dubare are Sugreeva, Srirama, Ajay, Gopi and Prashantha. Officials have to take a call here as Prashantha and Gopi are sensitive to the sounds of the city and they have panicked at the sounds of cannon and gunfire in the past.

Sugreeva and Ajay (new elephants) have been shortlisted as the Department has identified them as future Ambari elephants. With some training and grooming, they will be able to carry the Golden Howdah with grace in the next two years, said J.K. Dhobi, a Mahout from Dubare. If Sugreeva and Ajay are selected, then Gopi and Prashantha have to be dropped, he added.

From the Mathigodu Elephant Camp, Abhimanyu, Bheema, Mahendra and Gopalaswamy have been shortlisted. Mahendra participating in Dasara is a bit doubtful but the final call will be taken by the Department. Arjuna will come from H.D. Kote and Lakshmi will make it to the Gajapayana from Ramapura  Elephant Camp.