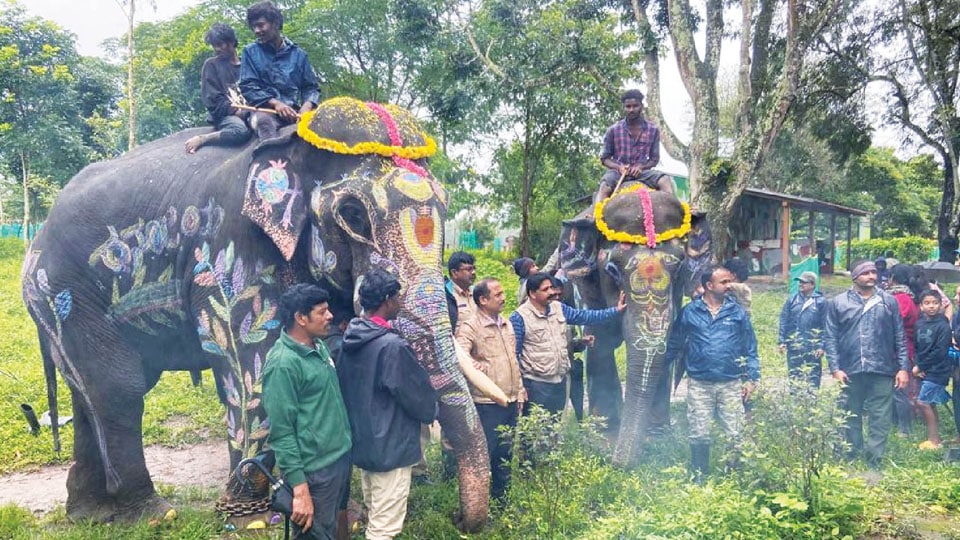 Hunsur: Gajapayana, the traditional march of elephants from the jungle camps to Mysore Palace to participate in the Dasara celebrations, will commence tomorrow morning at Veeranahosalli Gate in Nagarahole Reserve Forest.

District Minister S.T. Somashekar will flag off the elephant march in the presence of Forest Minister Umesh Katti. MPs Pratap Simha, V. Sreenivasa Prasad and Sumalatha Ambarish and Mayor Sunanda Palanetra will be present at chief guests. Hunsur MLA H.P. Manjunath will preside. MLAs, MLCs, Chairmen of Boards and Corporations and Forest Department officials will be present as guests.

The elephants will march to a distance and will be loaded into trucks and brought to Mysuru.

These nine elephants will arrive at Aranya Bhavan in Ashokapuram, Mysuru, at about 4 pm tomorrow and will be housed in Aranya Bhavan till Aug. 10. On Aug. 10, puja will be performed to these nine elephants between 7.30 am and 6 am and will be sent to Mysore Palace, where they will be accorded a grand welcome. The Dasara elephants will enter Mysore Palace through Jayamarthanda Gate between 9.20 am and 10 am in the auspicious Kanya Lagna.

Second batch of five Dasara elephants will arrive in Mysuru 30 days before Jumboo Savari, the grand finale of Dasara celebrations.

40-year-old Sugreeva from Dubare, 36-year-old Kunthi and 39-year-old Ganesh from Rampura Elephant Camp are the stand-by elephants. These elephants will stay in their respective camps and will be brought to Mysuru only if necessary.

On Aug. 11, the first batch of nine Dasara elephants will undergo weight checking and training to familiarise them on the Jumboo Savari route; weight lifting will begin besides putting them on special diet.

2 COMMENTS ON THIS POST To “Gajapayana tomorrow: Nine Dasara elephants to arrive in first batch to Mysuru”