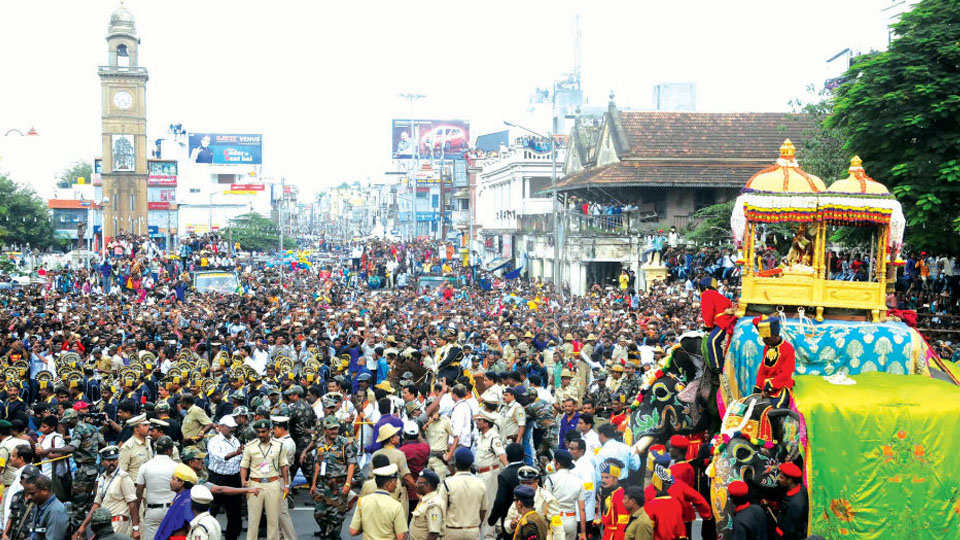 District Minister asks officials to do away with monotonous events

Mysuru: This year’s Dasara will include new events that will make the annual festivities even more exciting.

“The Naada Habba will be celebrated in a traditional, meaningful and unique manner,” Mysuru District Minister V. Somanna announced after chairing a Dasara Executive Committee meeting at the DC Office yesterday.

Addressing reporters after the meeting, Somanna said that  the Government will take all people’s representatives into confidence to make the festival a success. “It is a State festival and it will be celebrated in a traditional and religious way. Chief Minister B.S. Yediyurappa has sanctioned Rs. 18.5 crore for the celebrations and we will celebrate the festival in a meaningful manner without any lapses,” he said.

Novelist S.L. Bhyrappa will launch the Dasara festivities atop Chamundi Hill on Sept. 29 between 9.39 am and 10.25 am at the auspicious Vruschika Lagna and the cultural programmes at Mysore Palace will be inaugurated between 7.30 pm and 8.20 pm on the same day. The traditional Nandi Dhwaja puja before the start of Jumboo Savari on Oct. 8 will be performed by CM Yediyurappa between 2.15 pm and 2.58 pm during Makara Lagna at the Balarama Gate of Mysore Palace, he said.

The CM will subsequently flag off the procession by offering flowers to the idol of Goddess Chamundeshwari placed in the 750 kg golden howdah that will be carried by the 59-year-old Arjuna —the howdah elephant — between 4.31 pm and 4.57 pm at Kumbha Lagna, Somanna revealed. He said the torchlight parade at Bannimantap Grounds will commence at 7 pm, following the Jumboo Savari.

The Minister directed the authorities to do away with the monotonous routines of Dasara celebrations and advised them to come up with unique and novel ideas to make the 10-day celebrations grand.

A Committee headed by Mayor Pushpalatha Jagannath has been constituted to suggest new events and those programmes will be announced soon. Among the decisions taken at the meeting included hosting lunch for Pourakarmikas.

Somanna said another meeting of the Dasara Executive Committee would be convened soon to finalise the dates for extending formal invitations to Dr. Bhyrappa, members of the Mysuru royal family and others.

“The celebrations will be apolitical and I will personally visit all dignitaries and invite them for Dasara. I will seek their cooperation to make the festival a success,” Somanna said.

He said that he will meet religious heads like pontiffs, Bishop, Moulvis and invite them to participate in the festival. “We will request the family members to participate in all the events of Dasara,” Somanna said.

The Minister said that he will convene a meeting of Mysuru Corporators and Zilla Panchayat members, Tourism Department  to get their suggestions. In addition, private organisations, associations and industrialists will be roped in for the celebration.

Somanna said, “The caretakers of Dasara elephants are guests of the Government. We need to take care of them. The authorities should provide them all facilities and ensure clean environment in their living area.” The Forest Department has been directed to ensure that no kavadis and mahouts face any trouble during their stay in Mysuru.

As the birth centenary of Sri Jayachamaraja Wadiyar was under way, Dasara celebrations would also include a programme on the last Maharaja of Mysuru. “With only a few weeks left for the festivities to unfold, all of us will work more actively and enthusiastically to bring up the best,” he said in response to a question on the delay in the preparations.

Somanna directed Deputy Commissioner Abhiram G. Sankar, who is the Dasara Special Officer, to ensure adequate accommodation and transport facility to the people visiting Mysuru and also directed the Police officials to install CCTV cameras at vantage and sensitive places.  The DC was asked to ensure that visitors don’t face any trouble for staying and to travel between the places. All crowded places must be fitted with CCTVs and safety should be ensured to visitors.

Among the issues discussed in the Dasara Executive Committee meeting was that a round-the-clock call centre will be opened at Mysuru Palace premises to facilitate tourists visiting Mysuru. The centre will be opened on Monday (Aug. 26) and it will send Dasara information through WhatsApp to people.

On Dasara illumination, it was decided that the grand illumination that covers the core areas of the city will be retained for 15 more days after the festivities get over as a tourist attraction.