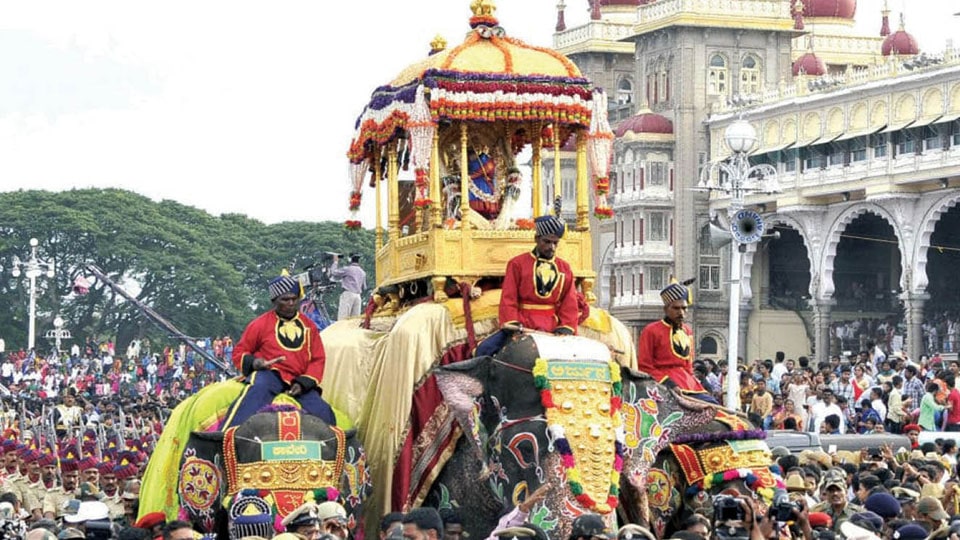 Mysuru: With Dasara procession (Jumboo Savari) scheduled to take place on Oct.8 this year, the District Administration is all set to start preparations for the world famous event from the first week of July.

The ten-day Dasara event this year (2019) will commence on Sept.29 with the performance of puja at Sri Chamundeshwari Temple atop Chamundi Hill and culminate with Vijayadashami procession on Oct.8. Last year, the festival was held from Oct.10 to 19 and noted littérateur and philanthropist Sudha Murty, who is also the Chairperson of Infosys Foundation, had inaugurated the festivities.

With the Dasara just over three months away, the State Government is likely to hold the high-power Dasara meeting in Bengaluru chaired by the Chief Minister later this month, following which the District Administration, MCC, MUDA, Kannada and Culture Department etc., will begin the preparations for the grand annual event in the first week of next month.

Deputy Commissioner Abhiram G. Sankar, speaking to Star of Mysore, said that the civil works for Dasara will be taken up much before than usual as there were rampant complaints in the past about shoddy work and corruption with works being taken up just a few days before Dasara.

Maintaining that necessary measures will be taken to ensure quality of works, the DC said that he would write to the State Government shortly to fix the high-level meeting at the earliest so that preparations for Dasara festivities can be taken up much earlier and proper plans can be drawn.