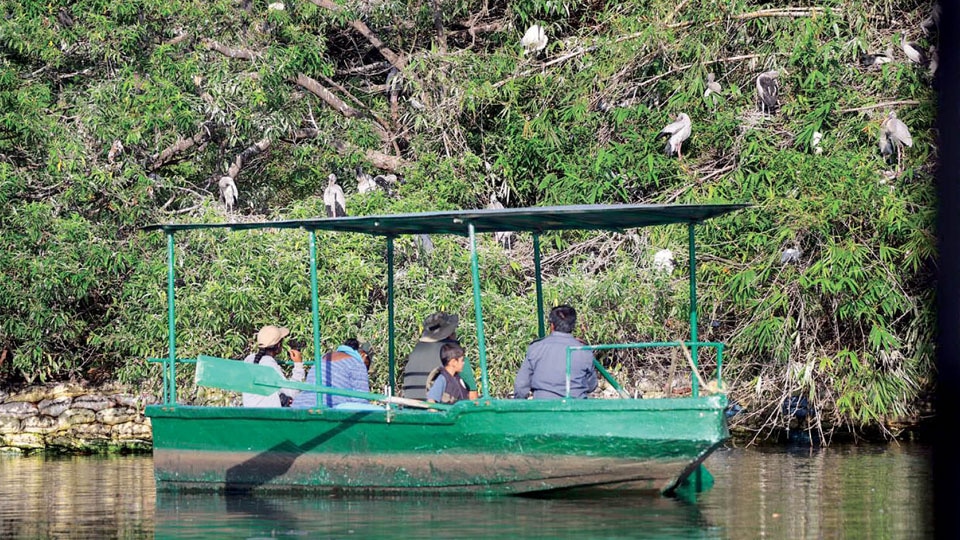 Srirangapatna: The Forest Department conducted a bird census to document winged beauties at Ranganathittu Bird Sanctuary this morning. The bird census was officially started last year and today’s survey was the first for this year.

The objective was to prepare a baseline data with a scientific enumeration of birds that flock the Sanctuary during different seasons. The census which began at around 7 am consisted of about 20 members or volunteers who were avid bird enthusiasts, scientists and bird watchers.

The volunteers were split into 7 teams with each team consisting of a maximum of three members and were assigned certain specific islands in different boats. This census is a part of the long-term planning to document the different species of birds that congregate and roost at the islands located a few kilometres off Srirangapatna on the banks of River Cauvery.

Speaking to Star of Mysore, Deputy Conservator of Forests (DCF) Dr. K.C. Prashanth Kumar said, “This census which was initiated last year is a periodical process to understand the avian diversity and composition. This is the fifth official bird census or survey and we make sure to have once in every three to four months.”

“For today’s census, we have bird enthusiasts and lovers from Mysuru and Bengaluru. Through this survey, we understand the habitat behaviour and breeding pattern and get an overall perspective of the birds. This data will be compiled for Ramsar Site (Wetlands of International importance) tag,” he added.

Speaking on the Ramsar Convention, DCF Prashanth, said, “To apply for the Ramsar Site, first we will have to get related database so that Ranganathittu is declared as a wetland. So currently with the help of World Wide Fund for Nature, we are compiling the data and reports that will be sent to the Ministry of Environment, Forest and Climate Change (MoEFCC).”

“The data collated during the survey, reports, bird counts, surveys, will be submitted and then MoEFCC will declare Ranganathittu as a wetland. Once it is declared as a wetland, then we can move for the Ramsar Site recognition. Hopefully within a year or two we can get the recognition,” he added.

“It is true that some islands were eroded due to the floods and huge water release from Keishna Raja Sagar Dam last year but everything is under control. The islands are stabilised and are strengthened now. Though a few crocodile hatchlings had to face the gush of water, they are all stable now and we have approximately around 100 marsh crocodiles,” he added.

The Forest Department had provided binoculars, details for reference and the data chart.

Ananya Kumar, Range Forest Officer, Puttamade Gowda, Deputy Range Forest Officer and 24 staff including boatmen were assigned for the census. Puttamade Gowda said, “The main island in the sanctuary itself is almost 0.67 kilometres. The entire sanctuary accounts for up to 400 hectares approximately. Here in our sanctuary we have many crocodiles which are above the age of 50. Some local villagers, though they do not have any scientific identification method, tend to see the marsh crocodiles and predict that it has lived over a 100 years.”

Bird enthusiast D.H. Tanuja said, “The bird census is being done here for more than 30 years. But it has been started formally by the Forest Department since last year and they have involved public in this initiative. Last year there were about 97 volunteers, but the data analysis proved to be difficult as the data cleansing was not up to the mark. So, we had to ensure that the people who can really identify birds to be a part of this initiative. So the Department hand-picked individuals this year and chose only those who had rich experience in birding and bird identification. Today we covered 25 islands and the data will be submitted to the Department.”