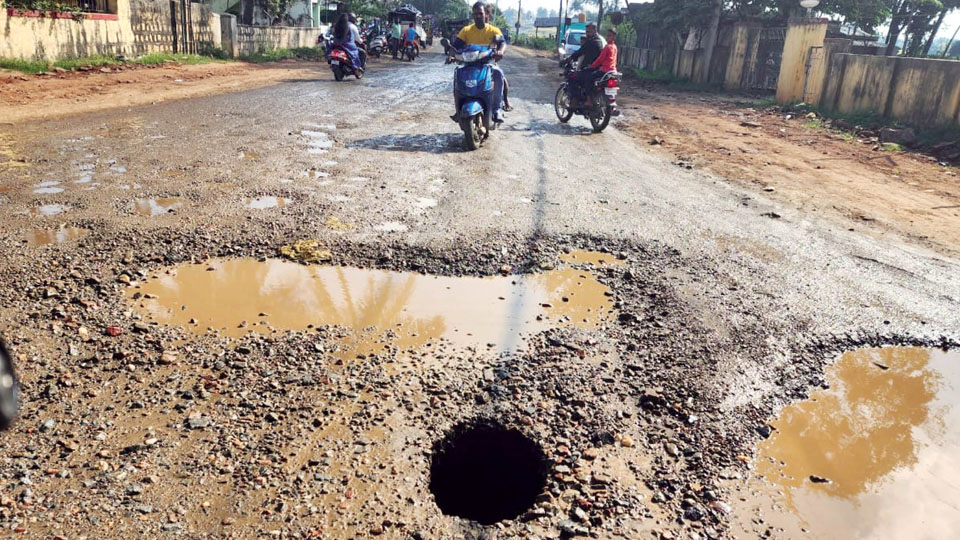 Commuting on Paschimavahini-Kannur Road in Srirangapatna a nightmarish experience

Srirangapatna: In another instance of a breakdown of infrastructure, a portion of Paschimavahini-Kannur Road crumbled and collapsed late last night. People travelling on the busy road this morning were in for a surprise as they stared at a gaping circular hole on the road caused by soil under the asphalt sinking.

With the increasing number of patched-up roads and crater-like potholes on the stretch, helped in no small measure by official apathy, a hassle-free ride remains a distant dream for most commuters.

The Paschimavahini-Kannur Road links important destinations like the Krishna Raja Sagar (KRS) Dam, Balamuri, Karekura, Yedamuri, Ranganathittu Bird Sanctuary and almost all the temples in and around Srirangapatna. Also, this road is used by hundreds of commuters every day to reach their offices in Mysuru.

Due to heavy rain and continuous water discharge from the KRS Dam, the Ranganathittu and Cauvery River banks were out of bounds for tourists for months. Also, the KRS Dam and Brindavan Gardens were closed recently for over a month due to leopard scare.

Now both these hurdles have faded from public memory and tourists are coming back to Srirangapatna. But their visit is proving cumbersome and back-breaking as the entire Paschimavahini-Kannur Road is ridden with potholes and as the asphalt has given away, dust and jelly stones dominate the stretch.

As a vehicle passes on the road, it lifts dust and the vision of other vehicle drivers is blinded and they have to wait till the dust settles down. This is leading to many accidents.

Surprisingly, the road works were initiated two months back by MLA Ravindra Srikantaiah with an estimated cost of Rs. 9.60 but the repair works have not yet begun.

Travelling on the road has become a nightmarish experience especially during the weekends as most of the tourists who come to Mysuru travel on this road to reach the tourist destinations. Due to constant movement of normal and heavy vehicles, the existing bad-shaped road is further deteriorated.

While the contractor has begun the repair works in small stretches, villagers and the public have claimed that the works are being undertaken in a shoddy manner. Villagers, who inspected the works at Paschimavahini and Palahalli, alleged that the road is not being laid as per the standards.

While the contract conditions mention that jelly stones up to 10 inches have to be laid, the contractor has laid only three inches, violating the norms. After this gross anomaly came to light, villagers stopped the road works and summoned the officials from the Public Works Department (PWD) and expressed their displeasure.

Responding to the allegations made by the villagers, PWD Assistant Executive Engineer Mahesh and Junior Engineer Revanna assured that the road works will be done as per the conditions and guidelines mentioned in the Detailed Project Report.