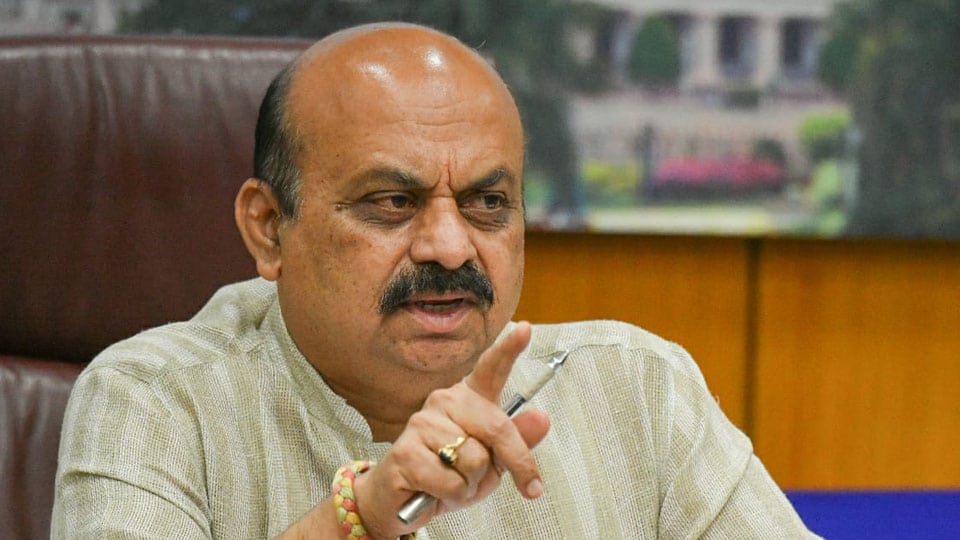 Will Bommai visit Chamarajanagar on Dec. 12?

It will be CM’s second visit; jinx theory makes rounds again with elections round the corner

Chamarajanagar: Keeping his promise of not believing in the so-called jinx associated with the visit to Chamarajanagar and his word that he would go to that place as often as required, Chief Minister Basavaraj Bommai is likely to visit Chamarajanagar on Dec. 12 to inaugurate and lay foundation for a slew of development works.

During the visit, the benefits of various schemes of different departments will also be distributed to the eligible persons. It will be Bommai’s second visit to Chamarajanagar and the first visit was in October 2021 when the then President Ram Nath Kovind came there to inaugurate the 450-bed hospital of the Chamarajanagar Institute of Medical Sciences.

Though it will be Bommai’s second visit to Chamarajanagar, the news of the visit has set off speculations, especially when the State is inching towards Assembly elections.

Many of Basavaraj Bommai’s predecessors had avoided visiting Chamarajanagar given the belief that a visit to the town would hasten their political downfall. When reporters had questioned Bommai then on his visit to a jinxed place, Bommai had asked, “No one holds on to power eternally. And haven’t CMs lost power who never visited Chamarajanagar?”

“On several occasions in the past, I have visited Chamarajanagar as Water Resources Minister. It is the duty of the Chief Minister to visit a district. I am doing my duty. Beliefs and superstitions are for others, not for me. The question is not about the jinx, but about the duty of the CM,” he had stated.

“The fault lies not in the place but in our outlook and perception and I am happy to visit the town and would do so as often as required,” he had retorted. As per the letter written by Bommai’s Special Officer Channabasavesha to the Chamarajanagar DC on Nov. 29, the CM will visit Chamarajanagar on Dec. 12 following an invitation from District Minister V. Somanna.

READ ALSO  Ramdas stays away from all CM events

In connection with the CM’s visit, Somanna held a series of meetings with the local authorities and officers. He said the Chief Minister would inaugurate development projects or lay the foundation to infrastructure works and all preparations should be completed ahead of time. The CM would also visit MM Hills and chair a meeting of the Male Mahadeshwara Hills Development Authority, said Somanna.

• The jinx theory began circulating from the times of D. Devaraj Urs who lost the Chief Minister’s post within six months of his visit to Chamarajanagar in 1980.

• S.M. Krishna did not once visit Chamarajanagar as CM.

• Former CM H.D. Kumaraswamy visited and lost power due to some political developments in the State.