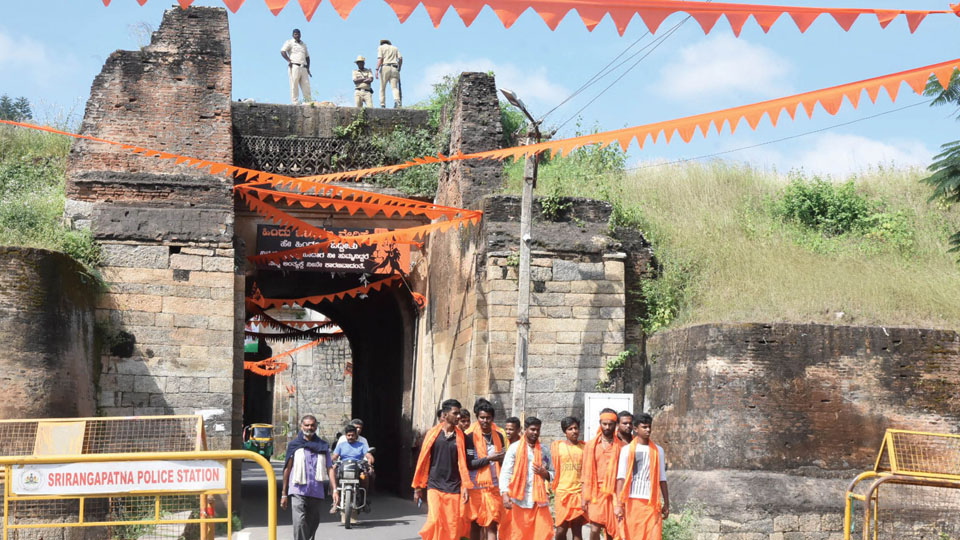 Srirangapatna: The Fort Town of Srirangapatna on the Mysuru-Bengaluru Highway, seemed to be painted in saffron colour today as thousands of Hanuma Maaladharis (Hanuma devotees), dressed in saffron attire and holding flags, took out ‘Sankeertana Yatra’ in the town as part of Hanuma Jayanti celebrations.

The Yatra, which began from Anjaneyaswamy Temple close to the famed Nimishamba Temple at Ganjam near Srirangapatna this morning, passed through the main thoroughfares of Srirangapatna town, before culminating at the famed Sri Ranganathaswamy Temple, covering a distance of nearly 10 kms.

All the prominent roads, lanes and circles of the Fort Town were dotted with thousands of saffron flags, banners and buntings that carried pictures of Lord Hanuman and other Hindu symbols.

Police had provided tight security all around the town for the massive Yatra and had completely barricaded the Jamia Masjid premises in order to prevent anyone from entering the area by any means.

Over 1,500 Police personnel, six KSRP Battalions and nine DR units were deployed all along the procession route from Ganjam to the town. The Police had also installed more than 25 CCTV cameras at vantage points and used 2 drone cameras for surveillance. The security was supervised by Mandya Superintendent of Police (SP) N. Yatish and other top cops.

Ahead of the Yatra, Mandya Police had taken out a route march in Srirangapatna town yesterday as a precautionary measure for law and order maintenance. The Police had also set up check posts at all four entry and exit points of the town.