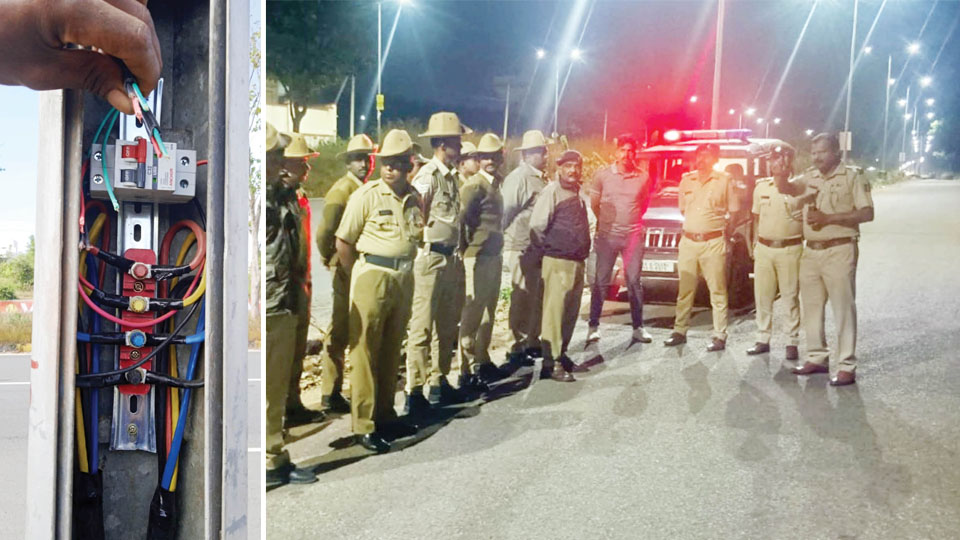 Mysore/Mysuru: After years of perpetual darkness, streetlights on one portion of the Outer Ring Road (ORR) from Manipal Hospital Junction, Hanchya, Sathagalli, Devegowda Circle, T. Narasipur Junction, APMC up to Nanjangud Road Junction became functional on the night of Dec. 1.

But just a day later, the switch boards of a couple of lights were stolen by criminals and some stretches of the 12-crore lighting project were plunged into darkness. According to the Police and Mysuru City Corporation (MCC) Commissioner G. Lakshmikantha Reddy, areas along the Ring Road near Rajivnagar Second Stage near Narayana Hrudayalaya were the target of the criminals and four to five MCB (Miniature Circuit Breaker distribution box) switch boards were taken away from the poles.

These switch boards were installed on the top of the electric poles so that it cannot reach the people from the ground. But criminals climbed on top of a truck to reach the boards. After prying open the boxes, they disconnected the circuits and removed the switches. “We have discovered that certain portions of the north and east of the Ring Road have become the target of the criminals,” Police said.

Following the crime, Mysuru-Kodagu MP Pratap Simha spoke to the City Police Commissioner B. Ramesh and sought night patrolling by his staff and registering of criminal cases against the perpetrators of the crime.

Taking swift action, teams from Udayagiri, Narasimharaja and Alanahalli were formed to patrol the Ring Road during night and the surveillance began last night under the leadership of Udayagiri Inspector P.K. Raju. The night patrolling will be a continuous process to instil fear among criminals and to reassure the commuters that the road is safe to travel.

READ ALSO  No business activities after 6 pm till Apr. 14

As part of the night patrolling, vehicles moving on the road were screened and the details of the to and from travel were noted down. Even two-wheelers were not spared and their documents and commuter details were checked.

Speaking to Star of Mysore, Mysuru-Kodagu MP Pratap Simha said that high-definition CCTV cameras will be installed soon on the stretch and as a first step, a DD for Rs. 5 lakh has been handed over to the MCC Commissioner yesterday through Indian Bank.

“There will be one camera every two kilometres and to start with, 20 cameras will be installed. We will also look for funding by companies under their Corporate Social Responsibility for this CCTV camera installation,” MP Pratap Simha said.

“Switch board theft is a sad and an unfortunate development. The thieves will not even get Rs. 500 to Rs. 600 from the sale of the switchboards. But they are causing a large public inconvenience. We are being targeted in this way whenever we do some good for the people. On one side, we develop the areas to provide a safe and secure environment and on the other side, there is mindless destruction,” he regretted.