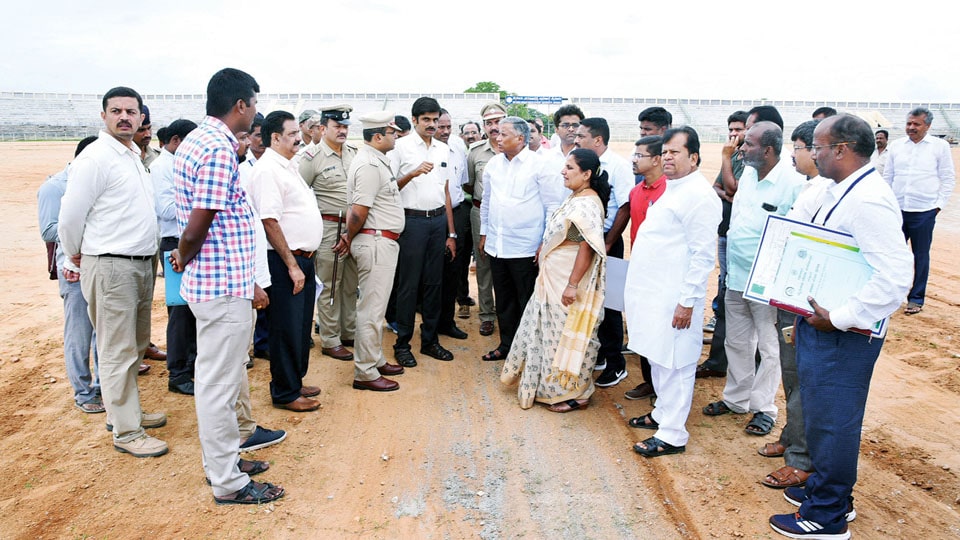 Mysuru: Aviation enthusiasts are in for a visual treat this Dasara as a full-fledged Dasara Air Show will be held on Oct. 2.

This was revealed by Mysuru District Minister V. Somanna while he was addressing media persons at Torchlight Parade Grounds this morning. “MP Pratap Simha had been given in-charge of organising a full- fledged Air Show,” he said.

Somanna said he had discussed this with Chief Minister B.S. Yediyurappa and the CM’s Office was following up the matter with Ministry of Defence.

Deputy Commissioner Abhiram G. Sankar said that the Dasara Committee wanted to organise the Air Show on Oct. 2 but the final decision was left to the Ministry of Defence and the Indian Air Force.

“Last year, people were disappointed as they could not see fighter jets and other aircraft used by the IAF as there was no Air Show. This year, we are hoping to get a positive reply from the authorities,” he added.

The events will be organised at Krishnaraja Boulevard and would provide an opportunity for budding artists and farmers.

Earlier, Minister Somanna, who arrived at the Torchlight Parade Grounds from Bengaluru, inspected the works being carried out for the mega Torchlight Parade to be held on Oct. 8, culminating this year’s Dasara.

“Torchlight Parade is a mega event that attracts many VVIPs, VIPs including Governor, Judges of High Court and elected representatives. Officials have been instructed to organise the event smoothly,” he added.

Currently, the Grounds can accommodate about 32,000 spectators compared to the earlier 20,000.

Somanna also informed that a meeting of City Police Commissioner, Superintendent of Police, DGP (Southern Range) had been called on Sept. 25 to discuss security arrangements and maintaining law and order during the 10-day festival. He also added that if necessary DG&IG Neelamani N. Raju would also be invited for the meeting.

For the privacy of neo-natal mothers, authorities will set up breast-feeding centres throughout the Jumboo Savari route. This apart, e-toilets and dispensaries will be set up.

The State Government had released Rs. 1,000 crore for the construction of new houses for flood victims and Rs. 500 crore for carrying out repair of bridges and roads damaged due to heavy downpour.

He said that he would visit Madikeri on Sept. 23 to inspect the sites where houses would be constructed for flood victims.

He directed officials to ensure that the arrangements for Dasara procession were completed on time.