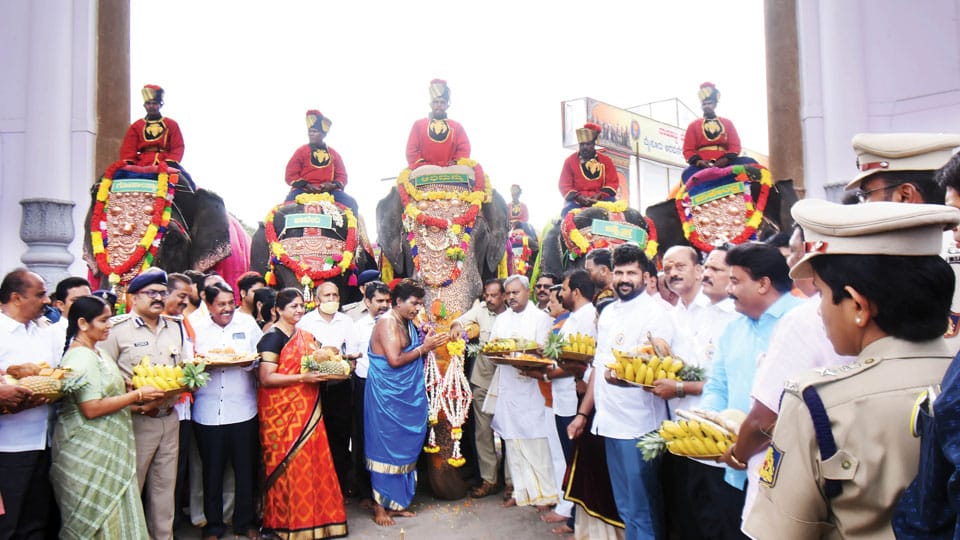 Mysore/Mysuru: The nine Dasara elephants led by 57-year-old mighty Abhimanyu, who will carry the 750-kg Golden Howdah, were accorded a traditional welcome into the Mysore Palace this morning.

The caparisoned elephants that arrived from their respective forest camps last Sunday and housed at Aranya Bhavan, majestically marched into the Palace to begin their Dasara journey.

Before they left Aranya Bhavan, a traditional puja was performed at the auspicious time between 7 am and 7.10 am by the Forest Department officers, staff and families, who reside in the vicinity. The elephants then began their march through Ashokapuram, Ballal Circle, Ramaswamy Circle, Chamaraja Double Road, Sanskrit Patashala and Gun House Circle to reach the Jayamarthanda Gate of the Palace at around 8.10 am.

At Jayamarthanda Gate, Ganapathi Homa, Dwarapalaka Puja, Paadapuja, Sankalpa, Chamara Serve, Mutthaide Mangalarathi and Pushparchane were performed and the grand entry was made at 9.20 am. The pujas were performed by Priest S.V. Prahallad Rao between 9.01 am and 9.35 am in the auspicious Kanya Lagna.

Inside the Palace, the jumbos received a rousing reception. The Police accorded a guard of honour to the jumbos that marched onto the premises. They were showered with flowers by District Minister S.T. Somashekar and others.  The jumbo team was accompanied by various folk troupes such as Dollu Kunitha, Mangalavadya, Kamsale and Puja Kunitha.

Tourists elated: Seeing the elephants, many tourists including a couple of them from abroad, who had come to the Palace, gathered at the venue and clicked photos and selfies. One more puja was performed inside the Palace welcoming the jumbo team as the elephants now officially came under the Palace administration.

As a tradition, the District Administration offered Phala-Thamboola to the Forest Department staff and urged them to make the Dasara a grand success. Ration and essential kits were provided to the Mahouts, Kavadis and their families as they will be staying in the Palace premises in makeshift tents and training elephants for the Jumboo Savari. The team was treated to a sumptuous breakfast at the Kodi Someshwara Temple premises.

From today, the elephant section of the Palace will have CCTV surveillance with constant monitoring of the jumbo health by the forest staff and vets and provision of a special diet.

Rs. 15 crore in hand: Later speaking to reporters, Minister Somashekar said that the Mysore Palace Board will spend Rs. 5 crore, which will take care of all expenditure inside the Palace including the Flower Show and the cultural programmes. The State has released Rs. 10 crore through MUDA for other expenditures for the festival, he added.

Dasara Expo: Replying to a question raised by media persons, the Minister said that this year, Dasara Exhibition will begin a fortnight before the formal Dasara inauguration. When told that every year such a promise is made but never implemented, Somashekar said, “This year, we are seriously thinking of starting the Expo 15 days before Dasara. We also have plans to make Palace Flower Show a grand affair.”