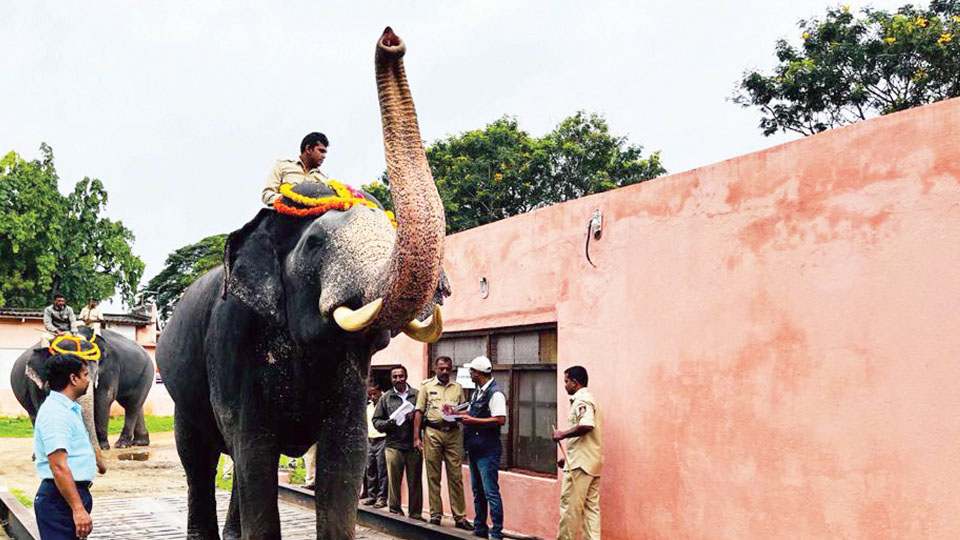 Mysore/Mysuru: The weight checking for all 14 Dasara elephants was held at Sairam and Co., 40 tonnes Electronic Weighing Services on Dhanvantri Road here this morning.

Bheema, housed in Mathigodu Elephant Camp, was seriously injured when a wild elephant had attacked him in 2018. He was unable to digest the food properly despite recovering from the injuries. But now, he is the one who had gained more weight (425 kg). This shows that he is healthy and has a good digestion power now as he is capable of digesting the special diet given to him.

Earlier, all the 14 Dasara elephants were brought out from Balarama Gate and they marched via Chamaraja Circle, K.R. Circle, Sayyaji Rao Road and Dhanvantri Road to reach the weighing bridge. On completion of weight checking, the elephants passed through J.K. Grounds, Irwin Road, Government Ayurveda Hospital Circle, Sayyaji Rao Road, K.R. Circle, Chamaraja Circle and entered the Palace through the Balarama Gate.