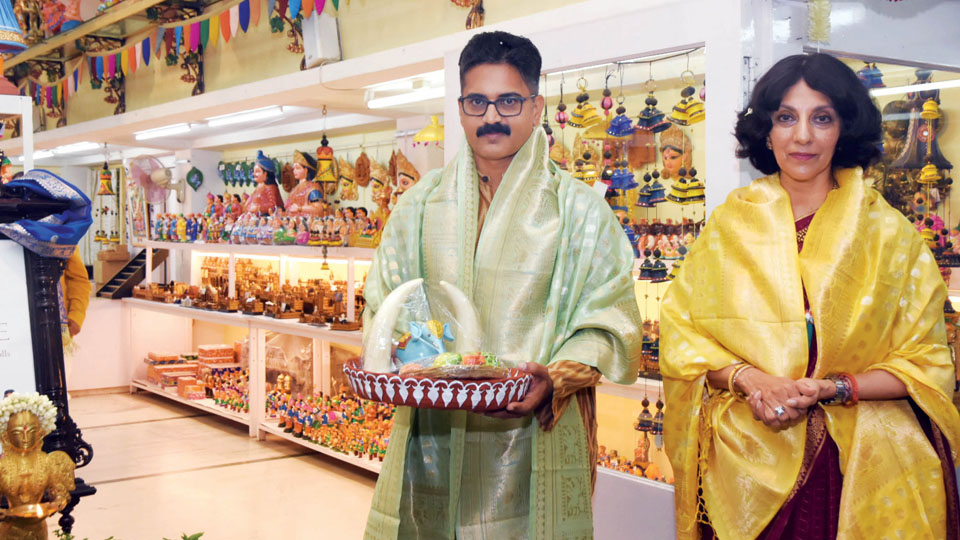 Mysore/Mysuru: The 18th edition of the annual expo-cum-sale of exquisite and traditional dolls from across India began at Ramsons Bombe Mane located on Nazarbad Main Road here last evening.

Speaking on the occasion, he said that dolls are universally adored and he was happy to see the vast collections here. Observing that the doll show is a thematic display for viewing pleasure of the connoisseur, he said that the show has many masterpieces.

Pointing out that the Bombe Mane also features all-time favourites as well as new additions, he said that the expo is a serious attempt to revive our fast vanishing cultures and traditions.

Noting that in the past dolls were being arranged in every household during Dasara, he bemoaned that all these practices are gradually being given up in the name of advancement and development.

Stressing on the need for reviving the glory of old traditions, Krishnadevaraya said that this will also help in passing on the rich traditions to the future generations.

Kaveri Ponnapa, author and independent writer on heritage, art and food, who unveiled the special display section at Ramsons Bombe Mane, described the myriad collection of dolls as an enduring tradition with a recorded history of at least four centuries. She also wanted everyone to visit this doll show at least once.

Though encouragement of arts and crafts is on the decline of late, she said that Mysuru has one of the country’s best collections of dolls in Bombe Mane which features hundreds of dolls that encompass every facet of the country’s socio-religious diversity.

Continuing, Kaveri Ponnapa said that Ramsons Bombe Mane has earned name and fame throughout the State for its vast of variety of collection of dolls mostly inspired by our epics and mythology.

Noting that she had seen this kind of doll show in Tamil Nadu, she said that she was told about the significance of all types of dolls on display at Bombe Mane by R. G. Singh of Ramsons.

Bemoaning that doll-making and the culture of collecting dolls is fast declining in our country, Kaveri said that we are showing dolls to our children through graphic arts which has become common these days, while at the same time we tend to ignore on educating them (children) with handmade dolls. In this backdrop, Ramsons is doing an excellent job in awakening curiosity among the general public on doll-making and the inexplicable beauty and magic that these dolls present. Through Bombe Mane, Ramsons also aims to cement a  socio-religious bonding in the society, she added.

A female doll with a flower basket in its hands, hoisted overhead, showered jasmine flowers on the guests, who were also felicitated on the occasion.

The dolls exhibition will be on show throughout the year and is open for public from 10 am to 7 pm daily.