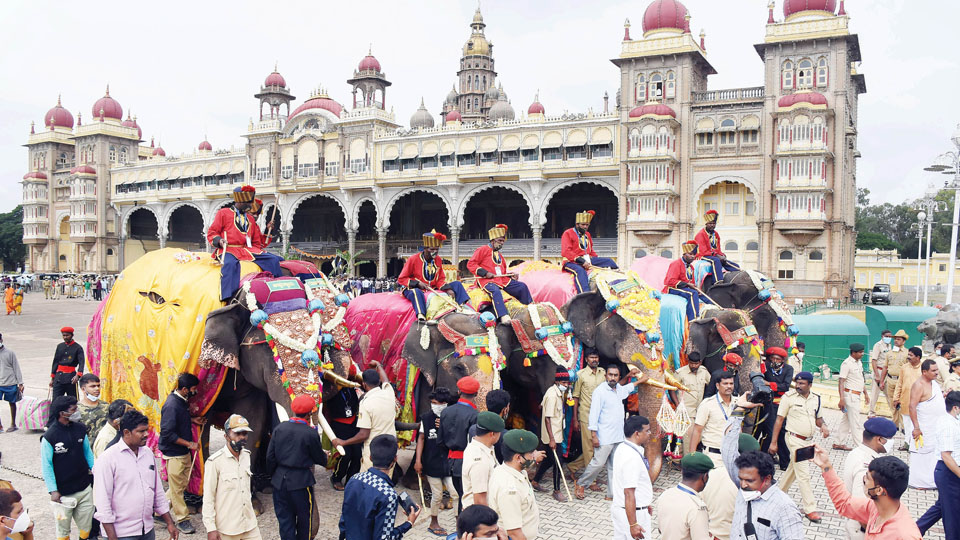 Mysore/Mysuru: The eight Dasara elephants led by 55-year-old Abhimanyu, who will be carrying the 750-kg Golden Howdah that will house the idol of Goddess Chamundeshwari on Vijayadashami day, were accorded a traditional ‘Poornakumbha’ welcome into the Mysore Palace this morning. The others in the team were Ashwathama, Dhananjaya, Vikrama, Kaveri, Chaitra, Lakshmi and Gopalaswamy.

The caparisoned elephants that arrived from their respective forest camps were stationed at Aranya Bhavan and this morning they walked till the Palace premises and made a majestic entry through the Jayamarthanda Gate. If Gajapayana is the first step for Dasara to begin, entry into the Palace is the second step to set the festivities rolling.

The elephants reached the Palace at 8.45 am amidst the music of ‘Nadaswaram’, women saxophonists, Mounted Police and English Police Band. The Police Band accorded a guard of honour to the jumbos that marched onto the premises as they were showered by flowers by Minister in-charge of Mysuru district S.T. Somashekar, elected representatives and officials.

The priests had fixed Tula Lagna between 8.36 am and 9.11 am for the grand entry. Before they began the journey from the Aranya Bhavan, priest S.V. Prahalad Rao performed pujas to Abhimanyu and Gopalaswamy at Brahmi Muhurtha at 5.30 am, considered an auspicious time.

First-timer Ashwathama, tipped to be the future Howdah-elephant, panicked on the road first near Ramaswamy Circle and later near CADA Office. He has entered the city crowd for the first time and so far he has been accustomed only to light motor vehicles and panicked seeing KSRTC buses and huge trucks.

On the way, he moved aside as the buses approached the road and the bull elephant climbed on the footpath, leaving out quick breaths. The mahout and kavadi were able to control him and calmed him down. Captured in 2017 at Sakleshpur, the 34-year-old Ashwathama was coaxed by the mahout and the kavadi to behave and enter the Jayamarthanda Gate.

Inside the Palace, in the first line of reception was Abhimanyu flanked by Chaitra and Cauvery. Next were Gopalaswamy, Dhananjaya and Lakshmi followed by Ashwathama. Vikrama was the last to enter as he is unwell and has a stomach ailment.

During the guard of honour and the General Band Salute, Ashwathama again panicked and stepped backwards and turned towards the Kodi Someshwara Temple. He moved four to five steps ahead and stood near the Temple as the Policemen and others ran helter-skelter seeing the panicked Ashwathama. Again, the mahout and kavadi brought him into control and the jumbo regained his composure.

Later, as a custom, the Minister handed out bouquets of fruits to key officials requesting them to successfully conduct the festivities.

The mahouts and kavadis of the elephants also received welcome kits containing daily essentials and other needs on the occasion as they will be staying in the Mysore Palace premises in makeshift tents and training elephants for the Jumboo Savari.

The elephants were brought inside the Palace and were given a cold-water shower and food. The special diet will begin from Sept. 18 and jumbos will begin their training for the Jumboo Savari in the Palace premises.

They won’t be taken out of the Palace as a precaution in view of the pandemic.