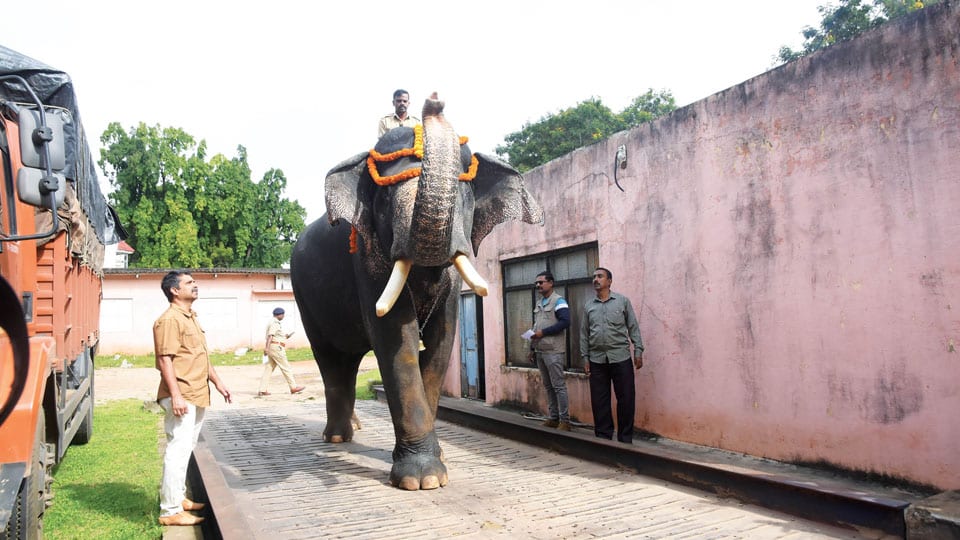 Mysore/Mysuru: The first batch of nine Dasara elephants led by Howdah Elephant Abhimanyu, which arrived in city on July 7 and entered Mysore Palace yesterday, where they were given a traditional welcome, underwent weight checking this morning.

Arjuna, who had carried Golden Howdah before Abhimanyu took over, remained the mightiest by weighing 5,725 kg and Abhimanyu, stood fourth by weighing 4,770 kg. Earlier, the nine Dasara jumbos left Mysore Palace through Balarama Gate. They were led to Sairam and Co., 40 tonnes Electronic Weighing Services on Dhanvantri Road, where the weight of all nine Darasa elephants was checked in the presence of DCF (Wildlife) Dr. V. Karikalan and other Forest Department officials.

The elephants passed through K.R. Circle, Sayyaji Rao Road and Dhanvantri Road to reach the Electronic Weighing Services. As the Dasara jumbos passed by, roadside fruit and flower vendors offered fruits and flowers to the jumbos.

Speaking on the occasion, DCF Dr. Karikalan said that as the Dasara jumbos had taken part in Dasara celebrations only inside the Palace premises for two years owing to COVID pandemic, their weights will be checked twice this time. The first batch of nine elephants which underwent weight checking today will again undergo weight checking during the checking of weights of the second batch elephants, which may arrive in the next 15 to 20 days.

Pointing out that the Darasa jumbos will be provided special nutritional diet, so that they could gain 400 to 500 kg more weight, Dr. Karikalan said, “We do not want the elephants to grow fat, we want them to be healthy.”

The DCF further said that the training for Dasara jumbos to familiarise them the Jumboo Savari route and also the weight training will commence from Aug. 14 between 6.30 am and 7 am, but the elephants will be taken for a 3 km walk inside the Palace premises from tomorrow.

After weight checking, the elephants passed via J.K. Grounds, K.R. Hospital Circle, Sayyaji Rao Road, K.R. Circle, Chamaraja Circle and entered the Palace through Balarama Gate. A large crowd stood on either side of the road and clicked photos of the Dasara jumbos as they walked by. It is after two years that the elephants walked on city roads.