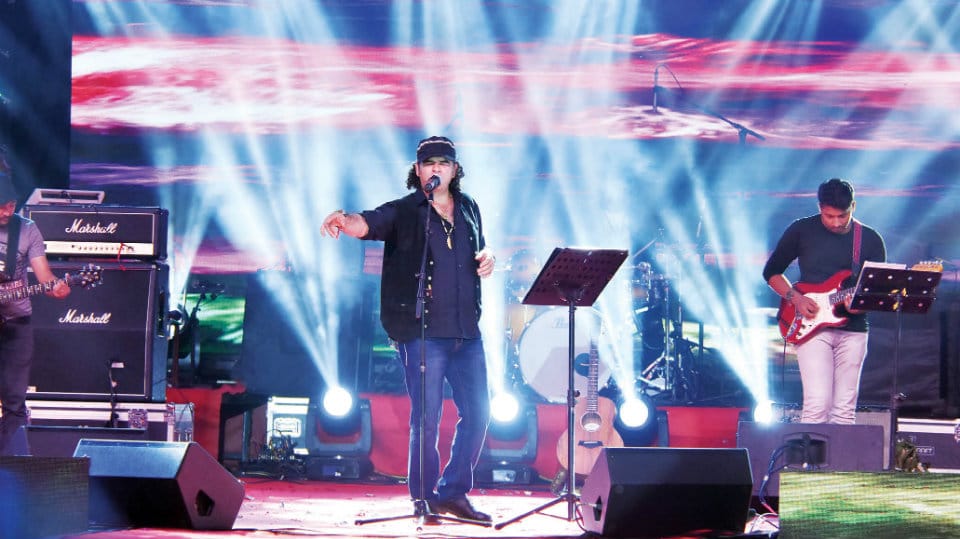 He is among the elite group of singers who have created a sensation in the world of music. Having been widely followed across the world, Mohit Chauhan is one such singer who has been able to captivate the pulse of the youth with a mixture of modern-day music and Sufi. He also has the credit of singing the entire album of the movie ‘Rockstar.’

Star of Mysore met the ‘Rockstar’ at Hotel Radisson Blu Plaza just before he headed to Maharaja’s College Grounds for his ‘Yuva Dasara’ concert on Wednesday. Excerpts…

Star of Mysore (SOM): Firstly, welcome to Mysuru. And is this your first visit?

Mohit Chauhan: Thank you very much for the welcome and I am really happy to be here for Dasara. I have heard so much about this beautiful city and yes, this is my first visit to Mysuru.

SOM: Having started your career through ‘Silk Route’ you have established yourself as one of the most sought-after playback singer. How has the journey been?

Mohit Chauhan: I started my journey through a band called ‘Silk Route’ and fortunately the first album was a huge hit.  Later, I started getting calls and I have worked with some of the best music composers like A.R. Rahman. I have also rendered songs in many languages like Kannada, Tamil, Telugu, Bengali and Gujarati.

SOM: How easy or difficult is it for a playback singer to record a song?

Mohit Chauhan: It is not easy for a singer to record a song in just a couple of hours. You need to portray the emotions in the given language. At times, it is difficult. But I have been lucky to have worked with good people and because of my music I get to travel across world.

SOM: Not many singers get a chance to record an entire album for a movie. You have recorded nine songs for ‘Rockstar.’ How was  the experience?

Mohit Chauhan: One singer recording for the entire movie album used to happen a long time back. In recent times, a singer gets to record one or two songs. ‘Rockstar’ has been a milestone so far in my musical career and it was also based on a musician. I saw the songs being developed from a scratch with lyricist Irshad Kamil, Director  Imtiaz Ali, Ranbir Kapoor and sometimes A.R. Rahman sitting together to make the songs. It was like a workshop for an entire year. It’s like once-in-a-lifetime opportunity.

SOM: What is the most important factor for a singer while recording songs in other languages?

Mohit Chauhan: It is challenging. Though you do not know the language, you need to feel the emotions. When I am recording songs in any other languages there is somebody to tell me the correct pronunciation. A singer must become a part of the song and the movie.

SOM: You have been associated with many social causes.

Mohit Chauhan: I am associated with Sadhguru Jaggi Vasudev for ‘Cauvery Calling.’ I am honoured because he sings songs that I have recorded with me sometimes. I am also involved in a few organisations which work for animal welfare and cultural exchange. Recently, I was invited to Mongolia for a cultural exchange programme.

SOM: Tell us about your  future projects.

Mohit Chauhan: I have joined hands with some musicians from Africa and the music should be out soon. I am also working on an album for which I have completed rough recording and will be travelling for concerts too.

SOM: What is your opinion on the ban imposed on artistes from Pakistan?

Mohit Chauhan: Music does not have any barriers. But then we have had problems with our neighbour and India’s sentiment has to be respected. I was in Mumbai when the 26/11 happened and there have been killings at LoC every other day. I think it is fine to exert pressure on the troublesome neighbour to stop terrorism.

SOM: Having not been trained in any form of music, what inspired you to try your hands in this field?

Mohit Chauhan: I have always been a science student. I have completed my M.Sc. (Geology). Music has been in my blood. I am fortunate to enter this field.

SOM: Your message for Dasara.

Mohit Chauhan: Mysuru is really clean and I wish the entire country replicates Mysuru. And my message to the youth would be to make our country a better place, work towards protecting environment and animals. We being a special race, it is our responsibility to protect our natural resources.