Home » Columns » Abracadabra By K. B. Ganapathy » After a day’s lazing or hard work, let us relax ! 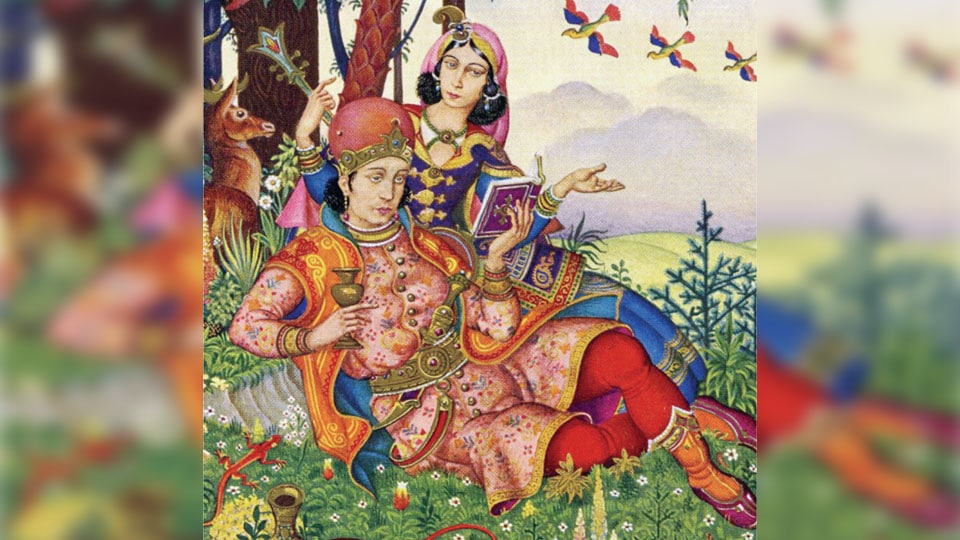 After a day’s lazing or hard work, let us relax !

Here with a Loaf of Bread beneath the Bough,

A Flask of Wine, a Book of Verse — and Thou

Beside me singing in the Wilderness —

And Wilderness is Paradise enow.

Ah, my Beloved, fill the cup that clears

TO-DAY of past Regrets and future Fears —

Myself with Yesterday’s Sev’n Thousand Years.

–  The Rubaiyat of Omar Khayyam

I have been living a life more mundane and less spiritual, though I love spiritual discourses of Masters like Swami Chinmayananda, Osho Rajneesh and now Jaggi Vasudev of Isha Foundation, Coimbatore. As for my mundane life, it is drudgery when I have to do what I do not love. However, if the work relates to what I love most, like reading, writing, editing, arguing on dialectics or travelling I am lost to the world and there is absolutely no fatigue.

On many occasions, the coffee that lands on my working desk goes cold as the coffee is forgotten being immersed in what I am doing. Even alcohol fails to get my attention when I am doing what I love. Which means that I love my work more than alcohol! Otherwise, I would surely love alcohol to work that I don’t love.

Having said this, let me come to the spirit with which alcohol of all brands are made. I am provoked to write on this subject on seeing two famous magazines, one the National Geographic and another the Outlook, writing about alcohol — elixir of life-divine for wise and life-demonic for the fool. Being a discerning imbiber of alcohol, though not a connoisseur, the articles interested me and thought I should share some of the information with those who sync with my  interest on this subject.

First the good news. According to the National Geographic (NG), alcohol has had a 9,000-year love affair with mankind and still continues with renewed vigour and passion. The article claims that alcohol is not just a mind-altering drink. It has been a prime mover of human culture from the beginning, fuelling the development of art, language and religion. May be alcohol helps produce more creative adrenaline thus enabling the artist to be more creative and those who deliver religious or political orations more mesmeric. In the Army, it is said, the soldiers are let loose on enemies after being fed with alcohol. It makes them daring, bold and non-stoppable in their assault on the enemy camp or fort. According to research, alcohol lowers inhibitions and that can make people feel closer to their friends and to the spiritual world.

Germany has a long history as a nation of beer-drinkers and sausage-eaters. French make wine which they learnt from Romans who had conquered Gaul (France) many times during Rome’s empire days. In South Africa, beer is made of corn and known as Chicha. The Incas of South America consumed alcohol during festivals and offered it to their pre-Christian era Gods too — now to Christ also.

It seems, the active ingredient common to all alcoholic beverages is made by yeast — microscopic, single-celled organisms that eat sugar and excrete carbon dioxide and ethanol, the only potable alcohol. That is a form of fermentation.

This ethanol has one very compelling property — it makes us feel good. Ethanol helps release serotonin, dopamine and endorphins in the brain. These are the chemicals that make us happy and less anxious. Well, are we imbibing the excreta of a single-celled organism? Never mind stupid. Be happy. I am reminded of the film “The Gods Must Be Crazy” where monkeys and elephants eat some putrid, rotting, fermenting fruits and get drunk…

There is an explanation for the universality of alcohol since time immemorial; it affords psychic pleasures and hic, spiritual insight. Rouses mystical experience in the imbiber taking him closer to his maker and sometimes if taken in large quantity taking him straight to his maker never to return!

Not surprisingly the author of the book “Alcohol: A History” Rod Phillips volunteers to caution against ethanol’s intoxicating power. “Allow people to drink because it makes them happy and is a gift from the Gods but prevent them from drinking too much.” The spiritual and intellectual life of ancient Greeks was always fuelled by    wine, alcohol but within limits.

Greece was known for the warriors and philosophers; it was also the cradle  of democracy in the form of City States. Very practical and responsible people indeed! Which was why the Greek hosts mixed wine or alcohol with water and served the drink in three levels or courses. A three course booze party. First one for health, the second one for pleasure and the third one for sleep. I am a great admirer of Greece of old, the ancient Greeks, which is why I always sleep well ! Did you get me Steve?

It is written that after the third drink, the wise guests always went home. It is not written if they went to some other’s house! According to a fourth century comic poet, the fourth drink belongs to violence; fifth to uproar; the sixth to drunken revel and the seventh to black eyes. And the eighth one is Policeman’s. You don’t go home; you go to jail!

Now the bad news for we Indians — courtesy ‘Outlook’ magazine. Thanks to its new Editor-in-Chief Rajesh Ramachandran. Those concerned about health and with extra money will now make a paradigm-shift in their choice of alcohol. From IMFL to FMFL. Got me? From Indian Made Foreign Liquor (IMFL) to Foreign Made Foreign  Liquor (FMFL).

The bad news is flashed right across the magazine’s front page screaming, “Your whiskey is nothing but Desi Daru.” Country liquor and IMFL are both molasses spirit but the Bureau of Indian Standards (BIS) allows the one with chemicals used for colour and flavour to be labelled as whiskey, rum, brandy, vodka and the like. Cheating the boozer even before he is drunk, unable to see the bogus.

Alcohol, basically is produced from fruits and vegetables. But for branded alcoholic drinks like whiskey, rum, brandy, gin and vodka, the basic ingredient, apart from yeast, are different in foreign made brands. For example, for Whiskey, grains or malted grains, aged for at least three years in oak casks etc.; for Rum it is molasses, a by-product derived after sugar is manufactured from sugarcane; for Brandy grapes; for Gin grain spirit flavoured with juniper, a botanical; Vodka from the spirit made from potatoes, so on and so forth.

But in India it is a case of ‘Laakh dukho ki ek dava hai, Kyoon na aazmaaye, Kaahe ghabraaye, Kaahe ghabraaye’ of film actor Johnny Walker’s prescription in the film ‘Pyaasa.’ All labels of different varieties of alcoholic drinks in India are made with the spirit derived from molasses and then chemically coloured and flavoured. If it is true, time the government did take steps to change the molasses mindset of our liquor manufacturers. For the money we pay, we drinkers of the pint deserve a better genuine drink, not the spurious one. Till then three cheers!

2 COMMENTS ON THIS POST To “After a day’s lazing or hard work, let us relax !”