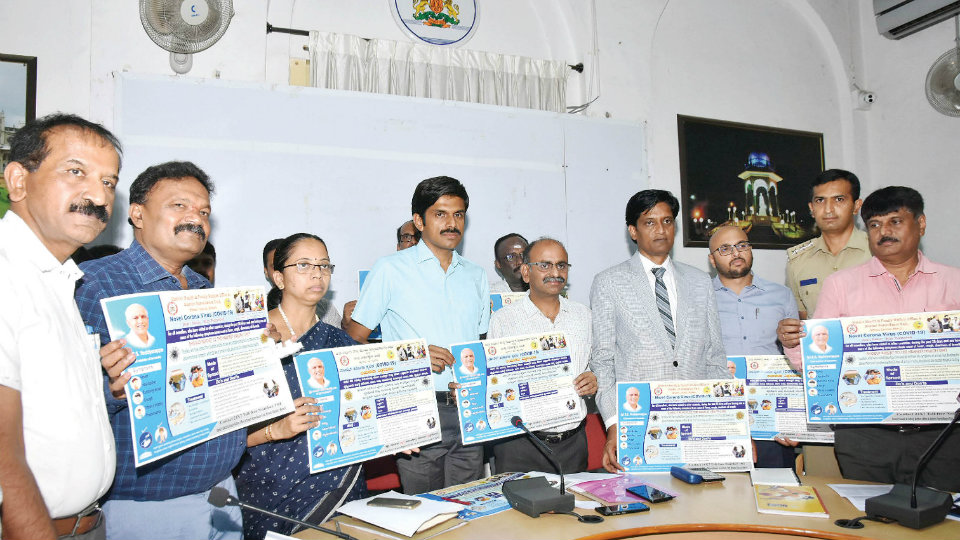 Mysore/Mysuru: Amid the scare of the deadly COVID-19, Mysuru Deputy Commissioner Abhiram G. Sankar has asked the Private Hospitals in city to create isolation wards for Coronavirus suspect cases.

The DC’s direction comes a day after Chief Secretary T.M. Vijayabhaskar had instructed the DCs of the State in a Video Conference on Thursday to take precautionary measures in their respective districts to prevent the spread of the virus.

Addressing a press meet at his Office here this morning, Abhiram G. Sankar  appealed the public not to panic as no Corona cases have been reported from anywhere in the district so far.

Highlighting the measures to be taken, he said that people should keep safe distance from persons who returned to Mysuru after travelling abroad for two weeks as a safety measure.

Pointing out that those who returned from countries affected by the Coronavirus should be compulsorily kept in house isolation, whether the person is affected or not, he said that people must report to the nearest Hospital if those who have returned from abroad show any symptoms of the deadly disease.Also the public can call Helplines 104 (State) or 1077 (District) in case of any help or direction, he said.

Stressing on the need for maintaining personal hygiene, he said that people should use sanitizers or soaps for washing hands after work and should avoid attending mass assemblies or gatherings as far as possible.

Pointing out that he has asked all Private Hospitals to create isolation wards, Sankar said he held a meeting this morning with the representatives of Indian Medical Association (IMA), Private Hospitals,  Airport, Railway, KSRTC, Health, MCC, Veterinary Departments and all other concerned authorities regarding the COVID-19 Regulation Act-2020, which was introduced by the State Government on Mar.11.

Noting that Hospitals should compulsorily screen patients, he said that samples of any positive cases must be sent to the Microbiology Lab in K.R. Hospital. Pointing out that there are only four such Labs in the State — Mysuru, Bengaluru, Shivamogga and Hassan —  he said that already 10-bed isolation wards with ventilator facility have been set up at K.R. Hospital, ED Hospital on KRS road, JSS, Apollo BGS and Colombia Asia Hospitals.

Explaining the salient features of the Act, the DC warned against spreading of false information regarding Coronavirus. The media should be very careful in reporting on issues concerning Coronavirus, he said and warned that disciplinary action will be taken against rumour-mongers. He further said that the DC, District Surgeon and the DHO have been entrusted with the power to act against spreading of false and panicky news.

Clarifying that the District Administration has not yet announced a ban on conventions, mass gatherings and the like, he said that, however, the organisers of international programmes and events have been asked to cancel them.

Asserting that a keen surveillance and screening mechanism is in place in the district, he said that screening is being carried out at all major public joints and the public must co-operate with the administration. He further said that people must not unnecessarily use masks in panic as no positive cases have been detected in the city and district so far.

Referring to complaints on exorbitant prices of face-masks in the backdrop of  COVID-19, the DC said that the District Administration will deal severely with those selling masks at exorbitant prices.

The DC in an important announcement said that a fully-equipped quarantine facility for 50 patients has been set up at the new District Hospital on KRS road. However, no person has been quarantined so far as there are no positive cases, he added.

The DC also released a COVID-19  awareness poster on the occasion.