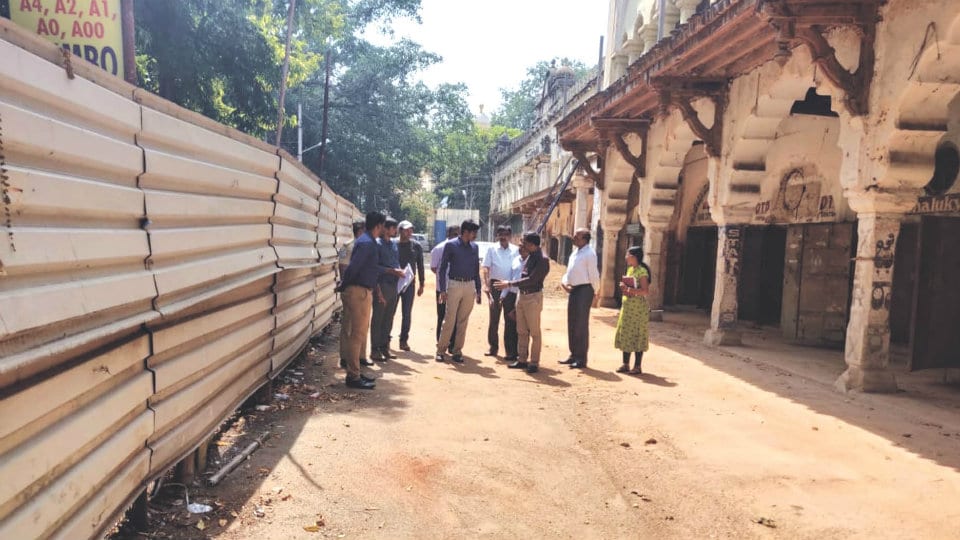 Mysuru:  There are two most important heritage landmarks in the heart of the city — Lansdowne Building and Devaraja Market — and that are lying in a dilapidated condition and neither the District Administration nor the Mysuru City Corporation (MCC) has taken any concrete steps so far to restore or rebuild the structures. However, yesterday there was some hope for the tenants of these two complexes when Deputy Commissioner Abhiram G. Sankar inspected both the places.

According to the DC, the decision of taking up the works depends on the decision of the Government. However, there are already two conflicting reports — one report of the Heritage Committee suggesting retaining both the heritage structures and repairing them, while the other of the Task Force stating that they have to be demolished and rebuilt.

He said that apart from these two reports, the District Administration was now thinking of calling for a third report from another Expert Committee but it will depend on the decision of the Government.

It is said that the Heritage Committee had submitted an interim report more than six months ago and they had to submit a final report which they have done yesterday (Nov.13). There is going to be a meeting at the DC’s office shortly where a decision will be taken based on the final report.

Meanwhile, MCC Commissioner K.H. Jagadeesha told Star of Mysore that he had also accompanied the DC during the visit and a decision could be taken only after the reports are sent to the Government.

It may be recalled that the front portion of the north gate of Devaraja Market was brought down by the MCC two years ago in August and though they had promised to build the shops again, nothing has been done about it.

As far as Lansdowne Building is concerned, the building was declared weak when the roof of a few of the shops had collapsed almost six years ago and a four people had died on the spot in the mishap.

Following this incident, the tenants were evicted and given alternate place right opposite to the building behind Thathaiah statue where they have been operating even now.