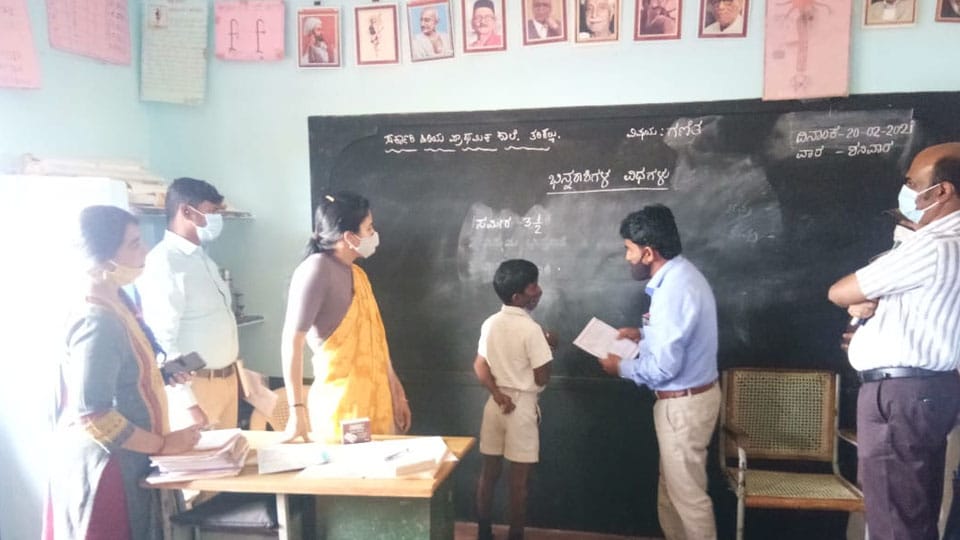 Hunsur (Terikal): Mysuru Deputy Commissioner Rohini Sindhuri donned the role of a teacher and solved Mathematics sums to the students of Government Primary School at Terikal village in Bilikere Hobli near Hunsur this morning. Over 20 students were present in the classroom and they were listening in rapt attention.

The DC visited the school as part of the State Government’s plan asking Revenue Department officials, including the Deputy Commissioners (DCs) and Tahsildars to visit villages on every third Saturday of each month to hear the grievances on-the-spot and solve the issues.

Accompanied by a battery of officials from various Departments, Rohini Sindhuri arrived at the village at 10 am and headed straight to the Government School. Wearing white uniforms as it is a Saturday, students welcomed the DC along with their teachers. As she entered the classrooms, the teachers and Education Department officials explained the facilities available at the school.

The DC interacted with students and they answered several questions posed by her on various textbook subjects. The DC asked the teachers to continue teaching and listened to the lessons, standing near the black board. She was impressed by the intelligence of students who come from rural agrarian background in this village.

She made the students read from Kannada and English textbooks. After some moments, the DC took up a chalk piece and explained fractions and difference amounts in mathematics and solved a couple of sums. Later she interacted with the students of Morarji Desai Residential School.

After spending some time in the classrooms, she heard the grievances of the villagers. Rangaiahana Koppalu Haadi of Terikal village has 100 to 125 families and over 1,400 villagers stay in the localities of Terikal Naala and Santhekere Kodi.

Many residents here have no basic facilities like housing and the DC was told that though sites have been sanctioned under Ashraya scheme, they are not handed over to them. The villagers urged her to intervene and take measures to hand over title deeds to them. Issues like ban on alcohol within the village boundaries, ration cards, Pouthi Khata issues, Podi and measurements cropped up at the meeting and the DC directed the officials to make note of the problems and take measures to solve them.