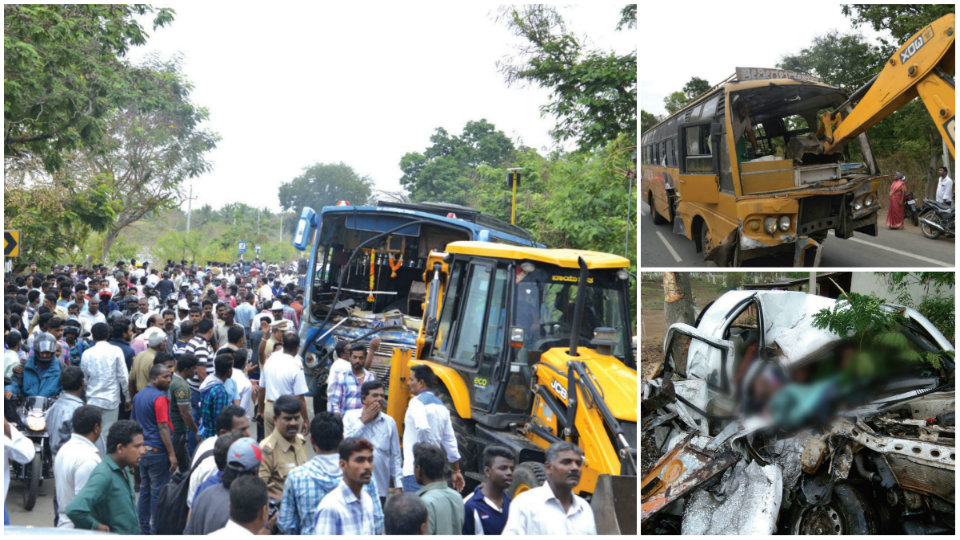 Mysuru: A demonic accident involving two private buses and a car has claimed the lives of four persons including a mother and a son besides leaving 46 persons injured near the Big Banyan Tree on Mysuru-T. Narsipur Road on the outskirts of city last evening.

While Prabha (60) and her son Vishwanath (35), residents of Dodda Nayakara Beedhi in Kollegal, travelling in a Indica car and Mahesh, a resident of Chikkahalli and a student of Alanahalli Shaswath Vidya Samsthe, who was travelling in the bus, died on the spot, another occupant of the bus identified as Basavaraju (55), and a resident of Kupparavalli in Nanjangud taluk, who was seriously injured in the mishap, breathed his last at a hospital.

Prabha and Vishwanath along with Sowmya (Prabha’s daughter) and Radha (Prabha’s sister) were travelling in their Tata Indica car to Kollegal from Mysuru.

Vishwanath was behind the wheels and his mother Prabha, who was seated in the front died on the spot, while Sowmya and Radha who were seated behind were injured. As the bus had fallen on top of the car, the car was heavily damaged.

Following the accident, traffic on the busy road was disrupted for a couple of hours resulting in traffic jam. As the news of the accident spread like quick-fire, villagers of Chikkahalli and those passing on the road rushed to the help of those injured and began to rescue them from the fallen bus.

As the car was mangled, the cops had to summon Fire and Emergency Services personnel who had to cut open the doors of the car to remove the bodies of Prabha and Vishwanath and also rescued Sowmya and Radha, who were injured.

The injured have been admitted to K.R. Hospital and other hospitals.

READ ALSO  Scooter is for two; not for too many !

According to eyewitnesses, Sri Veerabhadreshwara Bus which was speeding, overtook a bike and rammed into the car and due to the impact, the bus fell on the front portion of the car. Udayaranga Bus, which was coming from T. Narsipur side at the same time, rammed into both the vehicle which were involved in the accident.

Meanwhile, K.R. Traffic Inspector Manjunath said that a gold chain and a purse containing Rs. 300 was found in the accident site and suspected that the chain and purse belong to Prabha.

He further said that the gold chain and the purse are at Siddarthanagar Traffic Police Station and would be handed over to the rightful owner.

The villagers have alleged that private buses plying on the road go in a reckless manner besides over-speeding as if they are taking part in a race resulting in a lot of inconvenience to other motorists, who travel in fear.

The villagers further said that as KSRTC buses are fitted with ‘Speed Control’ device, their speed is controlled. As there is no such device fitted in private buses, their speeds are not controlled and most drivers drive the buses in a rash and negligent manner, sometimes resulting in ghastly accidents.