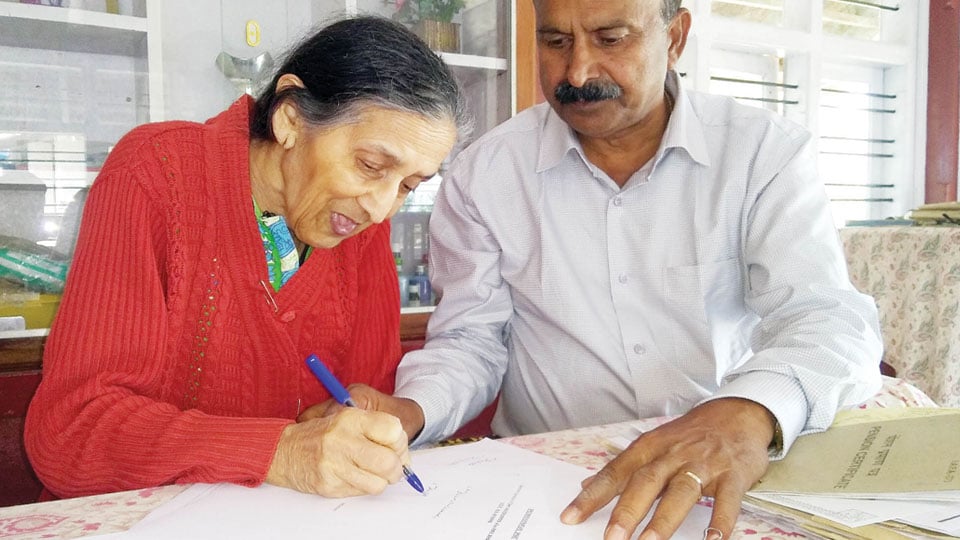 In a letter to President Ram Nath Kovind, who is visiting Madikeri in Kodagu district on Feb.6, 2021 to inaugurate General K.S. Thimayya Memorial and Museum, VeKare Ex-Servicemen Trust President Mandetira N. Subramani, who has taken up the cause of the widow, said that late Naib Subedar  B.N. Aiyappa was re-employed in Central Excise and Customs at Bengaluru after his retirement from Army and earned a second pension from the re-employer.

The letter cites the pathetic plight of the widow, who is being denied her Central Civil Family Pension by the erstwhile Central Excise and Customs authorities (now known as Central Tax / GST), since the demise of her husband on 9.8.2000.

Subramani says the denial is primarily due to the ignorance of the relevant policy by the PAO, Bengaluru, on the subject of family pension published by Department of Pensioners and Pensioners’ Welfare, Ministry of Personnel and Training-Administrative, Government of India.

The entitled Central monthly family pension of  Kaveriamma alias Rani Aiyappa as on today is Rs. 12,636 and the total denied family pension arrears works out to Rs. 14,74,751 as on 31.1.2021, the letter stated.

However, the Senior Accounts Officer of PAO, Bengaluru, has been insisting the hapless widow Kaveriamma alias Rani Aiyappa to produce additional Aadhaar and PAN cards in her pet name ‘Rani Aiyappa’ as got recorded by late B.N. Aiyappa at the time of his re-employment in Central Excise and Customs.

The letter also mentioned of an identical case of K.P. Subbavva alias K.P. Saraswathi, widow of late Army Veteran, Army No. 1129747 Gunner, K.D. Poovaiah, who got her Central Civil Family Pension sanctioned through CPAO with the help of VeKare Ex-servicemen Trust without any problems from PAO / CPAO. In this case too the late Gunner K.D. Poovaiah got his wife’s maiden name documented as K.P. Subbavva in the Army documents soon after his marriage. However, after his retirement he was re-employed with CRPF and got his wife’s pet name documented in CRPF records as K.P. Saraswathi.  After his demise, the Defence Family Pension was sanctioned to the widow of the veteran in her maiden name K.P. Subbavva.

In view of the above identical case which serves as a precedent, VeKare Ex-Servicemen Trust states that what applies to PAO in CRPF should also apply to PAO in Central Tax / GST.

Following the delay in processing the family pension documents by the PAO, Bengaluru and sanctioning of Central Family Pension to the widow of War Veteran B.N. Aiyappa, who is presently bed-ridden due to an accidental fall at her house in Kiggal village, Murnad, Kodagu, VeKare Ex-servicemen Trust has urged President Kovind to prevail upon the PAO, CBIC, Bengaluru and Pension Sanctioning Authority (Central Pay Accounts Office, New Delhi) to sanction the Central Civil Family Pension to Kaveriamma with arrears which works out to Rs. 14,74,751  (Rupees fourteen lakh seventy-four thousand seven hundred and fifty-one) as on 31.1.2021.