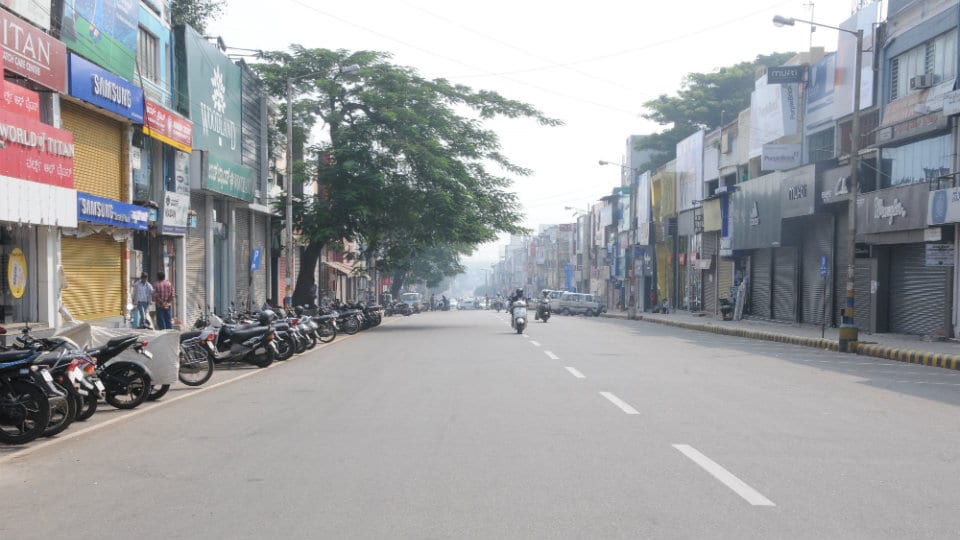 Mysuru: After making its mark in Bengaluru (at times praised and criticised), it is the chance of Mysuru to get Tender SURE roads. As a pilot project, the D. Devaraja Urs Road at the Central Business District (CBD) will be made a Tender SURE Road. This means, the road will be designed in such a way that there will be no digging.

Tender SURE (Specifications for Urban Road Execution) is a liberator from intermittent road repair works. It is a new age project that is capital intensive and low on maintenance. The aim of Tender SURE roads is to upgrade roads in the CBD to international standards. Tender SURE road standards mandate the integration of networked services under the road — water, sewage, power, OFC, gas, and storm-water drains.

Most of the city’s roads are wide. But the sheer volume of traffic and constant civil works like cables or drainage pipe laying, footpath or electrical transformer repairs make these roads perfect traffic gridlock examples. Once the road is laid as per Tender SURE specifications, the road cannot be dug to provide civic amenities.

Speaking to Star of Mysore, Mysuru City Corporation Commissioner (MCC) G. Jagadeesha said that Devaraja Urs Road will be declared Tender SURE once the works are completed at a cost of Rs. 12 crore. The money will be sanctioned from the Heritage Development Fund. “It requires anywhere between Rs. 12 and Rs. 13 crore to lay one kilometre of Tender SURE road. Urs Road is 950 metres long and once it is declared Tender SURE, the life of the road will increase by 50 years,” he said.

The design of Tender SURE roads prioritises the comfort and safety of pedestrians and cyclists, as well as recognises the needs of street vendors and hawkers. It also combines street landscape aesthetics with practical considerations. Some of its focus points are: uniform lane width, pedestrian-friendly footpaths, utility ducts on both sides of the roads and cycle lanes wherever feasible.

Tender SURE roads in short are model roads that are planned to last longer than the current conventional lowest-bid contractor-laid roads that not only need constant maintenance and repair but also keep getting dug up by other service providers. In Tender SURE, the monitoring system in place is supposed to be strict and is expected to ensure that standards are adhered to.

“You cannot even dig a Tender SURE road. Before the road is converted to international standards, civic utility lines such as drinking water, underground drainage, street-light, signal lights, optical fibre cable, CCTV cables will be laid along the utility ducts on both sides of the road so that the road need not be dug again. For this, a proper coordination between electricity supply companies, water works, Police and the MCC is necessary,” the Commissioner said.

The Cunningham Road in Bengaluru that was recently converted into Tender SURE Road. The road now has wide footpaths and a row of ornamental plants that separates footpath and the road. The footpaths have also been laid with iron bollards to indicate demarcation.

Jagadeesha said that the project has got a green signal from Mysuru District in-Charge Minister Dr. H.C. Mahadevappa and Deputy Commissioner D. Randeep. A Tender SURE consultant from Bengaluru visited MCC recently and gave a power-point presentation on the road. “We will prepare a Detailed Project Report and send it to the government for approval,” he added.

No takers for MCC’s pay-and-park tenders

There are no takers for tenders to implement the pay-and-park system on D. Devaraja Urs Road and the Sayyaji Rao Road. The Mysuru City Corporation (MCC) has called for tenders thrice and the response has not been encouraging.

The MCC has been planning to introduce the pay-and-park system to regulate the premium parking spaces at these roads in Central Business District (CBD). MCC officials say that certain shop-owners on both the roads park their own vehicles depriving the facility to shoppers.

“We have seen that shop owners bring their cars (sometimes owners of one shop bring two to three cars) and park from morning till evening. This has led to a lot of inconvenience to shoppers, tourists and other visitors. We want to prevent this by introducing the pay-and-park system,” they said.

“We have received a lot of complaints from the public and shoppers about the lack of parking space and the constant traffic jams on both the roads. No Parking Zones will solve these problems, they added.

Sources told Star of Mysore that the tenders were not filled in by interested parties as the norms were stringent. Surprisingly, even after the norms were relaxed, there has been no response.

Now that there are no takers for tenders, the MCC is planning to take over the pay-and-park system.