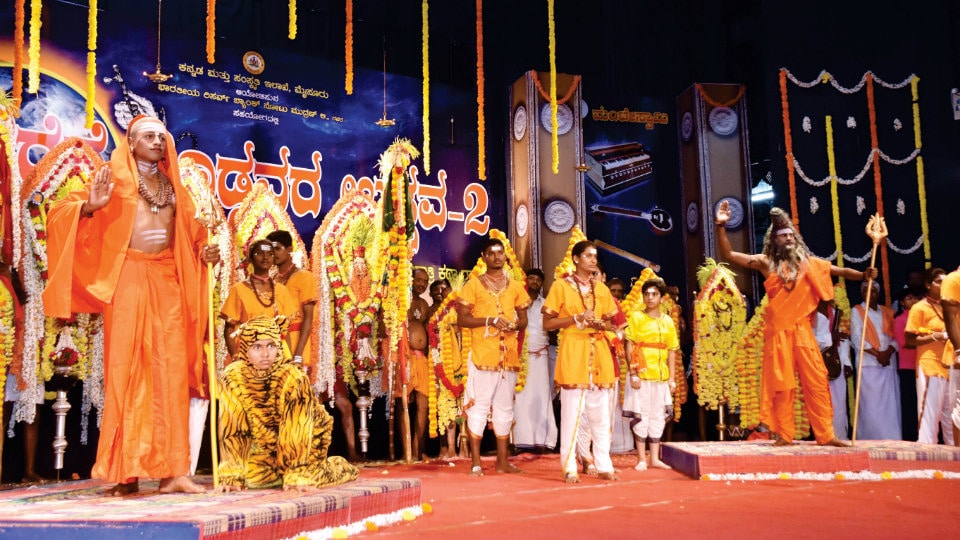 Mysore/Mysuru: A grand and colourful procession of Neelagara folk troupe carrying Kandaya was taken out from Kote Anjaneyaswamy Temple at Palace North Gate to Kalamandira before the commencement of the night-long folk music rendition programme at Kalamandira premises in city yesterday.

The Department of Kannada and Culture in association with Bharatiya Reserve Bank Note Mudran Limited, Mysuru, had organised ‘Dharege Doddavaru’, a night-long folk music rendition programme on Manteswamy and Male Mahadeshwara at Kalamandira premises in city last evening from 6 pm, which concluded today morning at 6 am.

The procession began with offering of flowers to more than 40 Kandayas including those of Doddamma Thaayi, Rachappaaji, Channaajamma and Siddappaji. These folk deities were brought to the venue from Chamarajanagar, Mandya, Hassan, Mysuru and other places.

The procession of folk troupe which began at Kote Anjaneyaswamy Temple, passed through K.R. Circle, D. Devaraj Urs Road, Metropole Circle and culminated at Kalamandira. Participation of Dollu Kunitha, Kamsaale, Nagari and Thamate artistes in the procession was an added attraction.

At the music programme held at Kalamandira, noted folk singers Mysore Gururaj and team captivated the audience with ‘Nambidavara maneya olage’ and other Kannada folk songs.