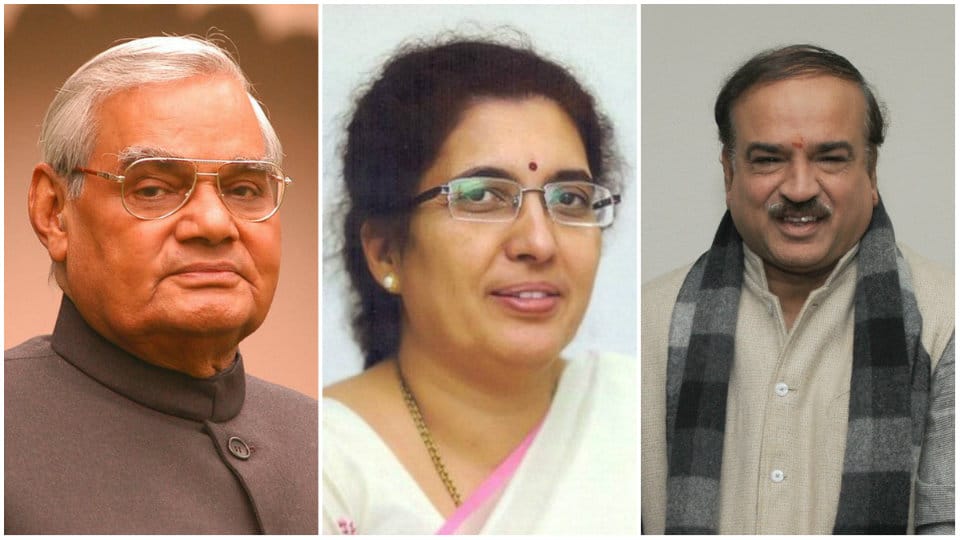 A message is doing the rounds in social media that Vajpayee named the aircraft ‘Tejas’ after Tejaswini Ananth Kumar, the wife of former Union Minister H.N. Ananth Kumar (late). The message (which was out on Tejaswini’s birthday on Mar.11, 2020), says that Tejaswini was a scientist in Aeronautical Development Agency between 1988 and 1998 and was an integral part of the team that developed Tejas. She resigned soon after Ananth Kumar became a Minister.

When Star of Mysore called Tejaswini Ananth Kumar yesterday to ascertain the facts of the message, she said that she had no idea who drafted the message that gives her full credit for the project.

“Yes, I was a part of the team at Aeronautical Development Agency and it is wrong to give me the entire credit. There are many senior scientists who have put in years of service and dedication to develop Tejas and they must be complimented for the feat,” she said, in all humility.

Recalling the meetings with Vajpayee along with her husband, who was a Union Minister then, Tejaswini said that she had met  PM Vajpayee a couple of times in New Delhi. “On the morning of Jan. 4, 2001, I, my husband and Vajpayee had a breakfast meeting in Bengaluru just before the flying display of the LCA’s two prototypes at HAL Airport. We were only three persons in the meeting and during the course of the conversation, the PM asked me what we should name the indigenous aircraft. I politely told him that he was the Prime Minister and it was his prerogative. Vajpayjee just smiled,” she recalled.

“Later we came to know that the PM had christened the aircraft as Tejas. It might be just a coincidence that a part of my name (Tejaswini) has Tejas. I don’t know what was working in the PM’s mind as he chose that name,” she said.

When Star of Mysore sought her reaction on the first combat-worthy flight of Tejas, Tejaswini said that it was a proud moment not just for her but for the entire nation. “It is a momentous occasion when an indigenously-built aircraft takes to the skies and is declared combat-worthy,” she said.

Vajpayee all praise for Tejas

“I am confident that this world-class fighting machine will make a glorious contribution to the nation’s defence. I am happy to name it Tejas. May it bring glory to our aerospace industry,” Vajpayee had said while addressing about 500 people at the  HAL Airport then.

Cruising at a speed of 600 km per hour and climbing to a height of 250 feet, both the prototypes, codenamed Delta-I and Delta-II, flew in close formation and conducted breathtaking manoeuvres, including crisscrossing in midair, teardrop turns, waggle wings and zoom pull-ups.

Vajpayee was impressed by the flight sorties and complimented Aeronautical Development Agency, Hindustan Aeronautics Ltd., National Aerospace Laboratories and Defence Research and Development Organisation for their motivation, innovation and dedication.