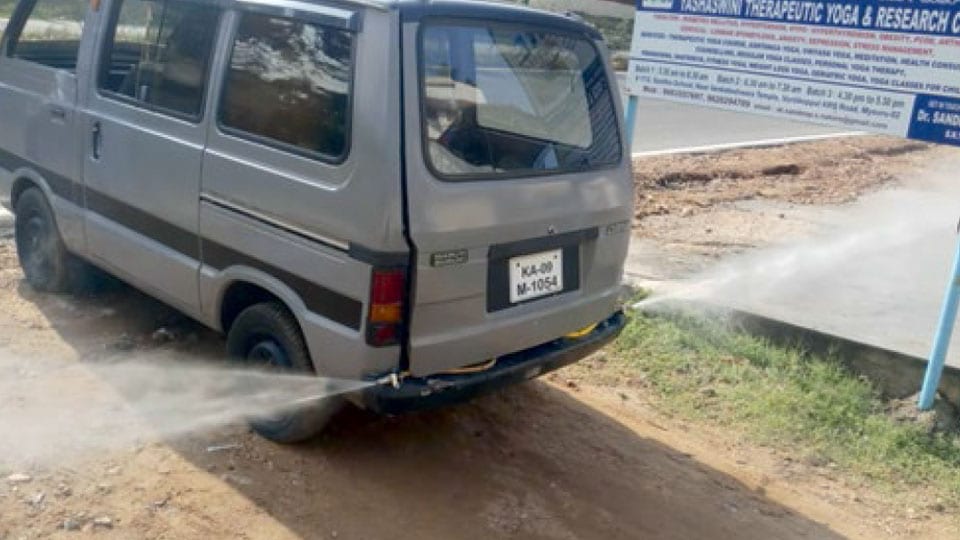 Disinfectant being sprayed daily in Gokulam

Mysore/Mysuru: In a bid to prevent the spread of Coronavirus, Corporator SBM Manju has undertaken spraying of disinfectant Sodium Hypochlorite on all roads in Gokulam and Brindavan Extension in Ward No. 6 daily.

Manju, who has got a sprayer installed to a Maruti Omni Van is getting his Ward (No. 6) disinfected by spending money from his pocket. “To me the health of the residents is important,” he says.

The Mysuru City Corporation (MCC) has already undertaken spraying of disinfectant with the help of Fire and Emergency Services personnel on all prominent roads, circles and commercial complexes in city as a precautionary measure to prevent the spread of the virus.

But Corporator Manju’s concern about the safety of the residents of his Ward has swung him into action. He has appointed two persons to spray disinfectant in his ward and he is paying them salaries from his pocket.

He has undertaken disinfectant spraying regularly since a week and is taking all preventive measures to avoid the spread of the virus.

“There are more number of senior citizens in Gokulam and Brindavan Extension, which comes under my Ward and their safety and good health is my responsibility. Hence, I have undertaken spraying of disinfectant at my own cost,” Manju said.