Home » Columns » Dissent is a vital part of nationalism. We need it. Enforced nationalism is counter-productive 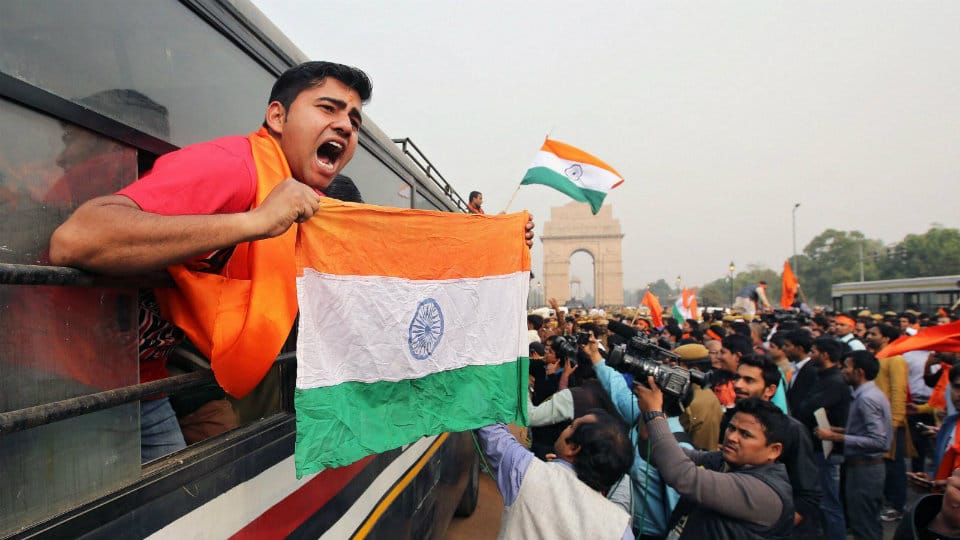 Dissent is a vital part of nationalism. We need it. Enforced nationalism is counter-productive

It is part of India’s Vedic wisdom that even amrut, when taken in excess, turns poisonous. The case of nationalism is no different: Too much of it becomes counter-productive. Narendra Dabholkar, Govind Pansare and M.M.Kalburgi were nationalists, proud of their country and working for its betterment. But they were independent thinkers like most educated Indians are, and that was enough for hyper-nationalists, with the fanaticism of the ignorant, to kill them.

Fanatics have grown more defiant in the last couple of years. They dare even the Prime Minister. When cow vigilantism raised its head, Narendra Modi, though belatedly, condemned the vigilantes as anti-social. Some leaders of the vigilantes responded with words of defiance against the Prime Minister. After the BJP’s recent victories, violent vigilantism has increased. Transporting even buffaloes invites attacks. A dairy farmer was lynched. UP’s meat industry has collapsed leaving thousands jobless and the economy badly hit.

Add to this the misuse of sedition laws. The silliest example was the filing of a sedition case against Kannada actor-politician Ramya. Her crime? She said Pakistan was not hell, that ordinary Pakistanis were like ordinary Indians. Normal people would see this as a normal observation. But an overheated patriot accused her of sedition. She said she was entitled to her opinion. The self-styled nationalists responded by throwing eggs at her car. This kind of nationalism is one-dimensional, intolerant, in fact anti-national.

Manufactured nationalism enforced from above only leads to tyranny and oppression. Hitler’s Germany proved that, as did Stalin’s Soviet Union, Mao Zedong’s China, Franco’s Spain, Pinochet’s Chile. On the other hand, dissent has never really harmed a nation. See America’s record.

During the Vietnam war, America’s writers and film-makers and students turned into vicious critics of the Government. Some 30,000 books came out on Vietnam. They minced no words. A 2013 study, bluntly titled Kill Anything That Moved: The Real American War in Vietnam, established how that war was a manifestation of American State terrorism.

No author was taken to court on sedition charges. In fact, public opinion forced America to end the war.

A New York Times columnist quoted chapter and verse to show that, as the Iraq war drew to a close, businessmen tied to President George Bush and his family were controlling business opportunities in the country in segments such as reconstruction. The columnist said, “Iraq is proving to be a bonanza for the Bush administration’s corporate cronies… The Bush-II crowd is arrogant, venal, mean-spirited and contemptuous of law and custom.”

No case of sedition was filed against the columnist.

The director of a Human Rights Organisation in New York said in an article that America used “torture, abuse, lies and cover-up” in Iraq. He described American occupation in Iraq as “a criminal enterprise masquerading as liberation.”

He was not called anti-national.

A corporate executive wrote a book in 2003 arguing that American politicians had consistently promoted evil, from installing dictators in a dozen countries to supplying anthrax and arms to Taliban. The book’s title: Rogue Nation.

No unknown patriot knocked at his door and, as he opened it, shot him dead.

Americans expressed their hatred for Bush in numerous ways. ‘Impeach Bush’ car stickers were among the more sober forms of protest. Some others left nothing to the imagination. Book titles, for example, were explicit: Stupid White Men, The Liar George Bush, Lies and the Lying Liars Who Tell Them.

Not one of the writers had eggs thrown at them, let alone sedition cases filed.

After nationalism drove Margaret Thatcher to the Falklands War against Argentina in 1982, she organised a Thanksgiving Service in London, the assumption being that God was on UK’s side and the nation had to express its gratitude to him. Britain’s religious head, the Archbishop of Canterbury, Robert Runcie, took a different view. He said in his sermon: “Those who dare to interpret God’s will must never claim him as an asset for one nation rather than another. War follows when the love and loyalty that should be offered to God are offered to some God-substitute, one of the most dangerous being nationalism.”

The Indians who are promoting a parochial version of nationalism with the help of guns, eggs and the Sedition Act may be inspired by what they consider religious sentiments, but it’s a misinterpretation of religion. History has given them a moment of opportunity. If they do not use that moment wisely, it will disappear.

Foolish things done with immunity because of political power are still foolish.

ONE COMMENT ON THIS POST To “Dissent is a vital part of nationalism. We need it. Enforced nationalism is counter-productive”