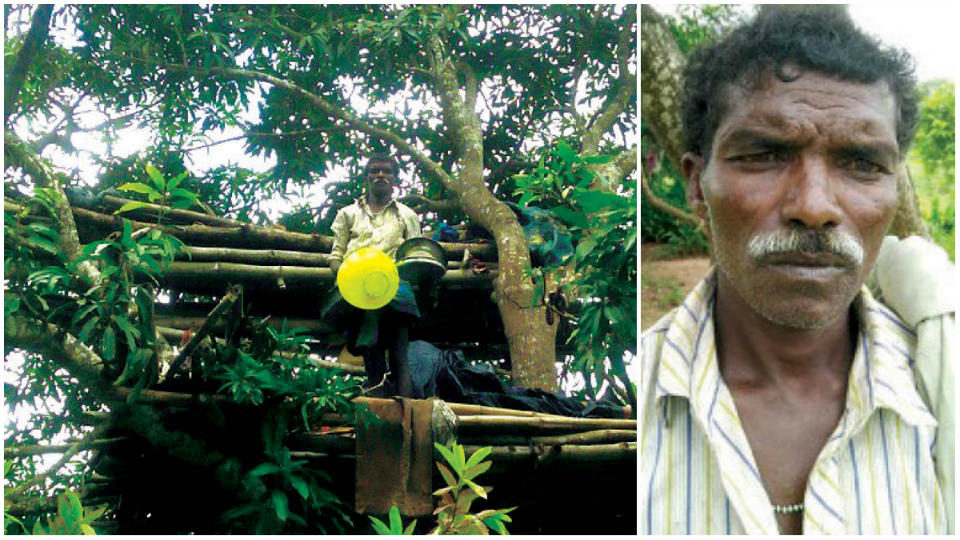 Mysuru/ Periyapatna: Mysuru Deputy Commissioner D. Randeep has stated that the District Administration would come to the rescue of Gejja, a native of Malaganakere haadi in Naviluru village near Periyapatna, who has been living atop a mango tree unable to bear the alleged harassment by the Forest Department officials.

In a letter to Secretary, Social Welfare Department, Randeep has stated that the administration would provide a space for him to live and sanction some livelihood schemes under various government programmes.

The DC’s letter comes in the wake of a report published in Star of Mysore on Aug. 2 under the headline “This man is living atop a mango tree since 2 years.” The report had highlighted how Gejja has been living literally like a tree-animal as he has no other shelter. Gejja had alleged that he was fed up with the harassment meted out to him by some officials from the Forest Department who destroyed his home in the name of building solar fences.

Randeep has stated in his letter that Gejja belonged to Jenu Kuruba community and his family was among the three Jenu Kuruba families that lived in the village along with 24 Soliga tribal families. Gejja was sanctioned 28 guntas of land and title deeds were issued.

Denying that Gejja was facing harassment from the Forest officials, the DC said that Gejja had quarrelled with his wife and children and was voluntarily living atop the mango tree.

The DC has said that Gejja has been, in the past, provided various benefits including supply of food grains under government schemes and he has a Ration Card and an Aadhaar Card. If Gejja was willing to come out of the forest, the administration was ready to rehabilitate him under the Land Ownership Scheme, Randeep added.