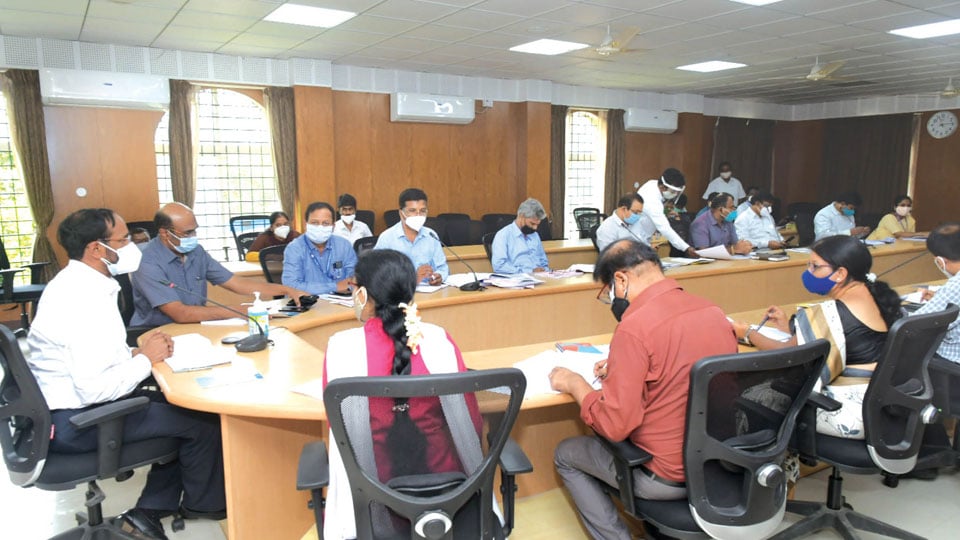 Mysore/Mysuru: IAS Officer and District in-Charge Secretary N. Jayaram, who is also the Mysuru Zilla Panchayat (ZP) Administrative Officer has directed officers to hold phone-in programmes to solve problems of general public and farmers as they are unable to come to Government Offices due to total lockdown across the State.

Holding a virtual Karnataka Development Programme (KDP) review meeting here yesterday, he noted that people were not coming to Office due to Covid crisis. So, Officers of Departments of Agriculture, Horticulture, Animal Husbandry and Education, which work closely with the public, must hold Sub-Division-level phone-in programme at least once in a week. Their grievances must be heard, noted down and solved within two weeks. Those issues, that could not be solved, must be informed to the people, he said.

New action plan drawn by Departments must get nod from the higher authorities in view of beginning of new financial year, he added.

Jayaram was unhappy over the reply given by Range Forest Officer of Social Forestry Department, Amit Raj, on tree plantation and opined his information was not matching with statistics.

Replying to a question on total number of trees planted in the district, Raj said of the total 3 lakh saplings planted, 20,000 have died. As many as 300 saplings are planted in an acre of land. Besides, honge and jamun trees were planted on roadsides. In total, three lakh saplings have been planted and achieved 100 percent success.

Jayaram wanted to know how those 20,000 saplings died when they were maintained well with tree guards and water. Going by documents, the Department has planted lakhs of saplings in the last 25 years and going by that there should have been big forests. But it was not seen, he observed.

There is no sapling or tree guard but still you claim to have planted lakhs of trees, he retorted saying, “I want to know whether farmers have grown sandalwood saplings given by your department. I will come and inspect. You take me and show the places.”

District Secretary Jayaram took CESC Officer to task for delay in energising the borewells sunk under the Ganga-Kalyana Scheme in the district.

CESC Executive Engineer Nagesh informed the meeting that 1,080 borewells have been given electric connection as against 1,190 applications received from various Corporations, and only 110 are pending. The Corona pandemic has hampered giving further connection, he added.

To this, Jayaram sought to know why CESC required so much time when it can complete it in three days. He issued directions to complete energisation of all borewells within a month.

Jayaram also took Officers to task for completing road works worth just Rs. 115 crore to Rs. 120 crore as against the total works of Rs. 650 crore and said it shows their negligence.

He expressed his unhappiness over delay in the completion of works under Pradhan Mantri Gram Sadak Scheme and for taking up just 25 percent of works in last eight-and-a-half months. He sought to know how they could complete the remaining 75 percent in the rest three months. All pending works must be completed on priority, he added.