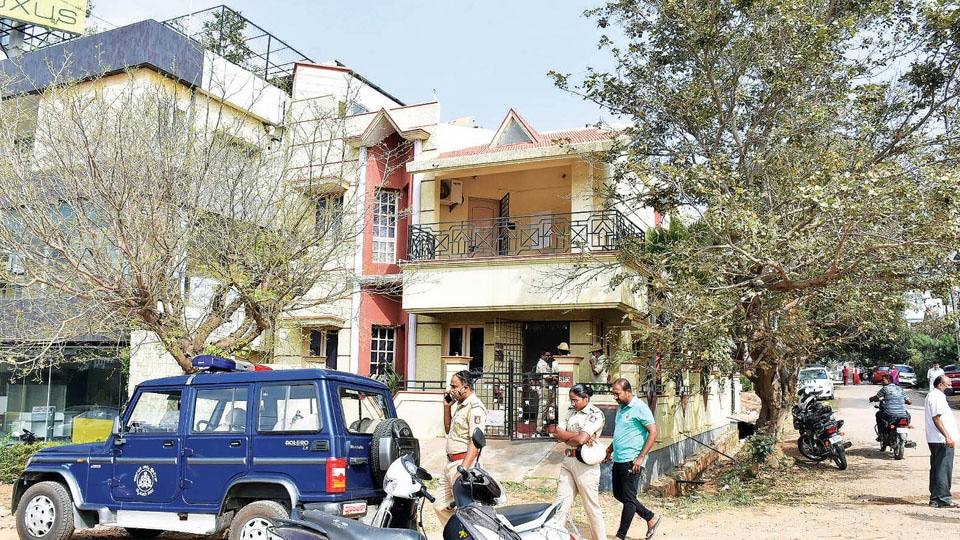 Mysore/Mysuru: In a shocking incident, an elderly doctor couple was attacked and assaulted brutally by an assailant, who made away with a gold bangle and a chain from their house in Vijayanagar 2nd stage in city last night.

The seriously injured couple are identified as Dr. Keshav P. Raichurkar and Dr. Krishnakumari, who are running Excel Prime Diagnostic Centre, adjacent to Saraswathipuram Police Station since last four years. The duo has been admitted to Apollo BGS Hospital and they are said to be out of danger. Close on the heels of this incident, family members of injured couple have arrived here from Bengaluru.

City Police Commissioner Dr.  Chandragupta, DCPs Dr. A.N. Prakash Gowda and M.S. Geetha Prasanna, N.R. Sub-Division ACP M. Shivashankar and Vijayanagar Police Inspector Balakrishna visited the  spot. Fingerprint experts were collecting vital clues and the Dog Squad too was pressed into service. A special team has been constituted to nab the assailant who was said to   be in his 20s.

The doctor couple resides at House Number 5182, 3rd Cross, Vijayanagar 2nd Stage since last 27 years. While Dr. Keshav leaves home at 7.30 am daily and comes back at 9.30 pm, Dr. Krishnakumari goes to the Diagnostic Centre at 10.30 am and returns home at 4.30 pm. Yesterday, Dr. Krishnakumari went to the Diagnostic Centre at about 11 am and returned home at about 3 pm.

Around 8.30 pm, Dr. Krishnakumari, on hearing sound near the car shed behind the house, opened the door thinking that her husband has come back. But she was shocked to see a youth with mask and a full face helmet. He barged into the house and banged her head against the wall rendering her unconscious. The assailant then pushed her inside the kitchen and locked the door from outside.

After 5 to 10 minutes, when Dr. Keshav arrived home, the assailant opened the door and before the doctor could react, the assailant stabbed him on his chin, neck and other parts of the body. When Dr. Keshav fell on the floor of the house, the miscreant opened the kitchen door and dragged Dr. Krishnakumari  to the hall where her husband was lying. On seeing her profusely bleeding husband, she pleaded the attacker to take the valuables in the house and not harm her husband. The assailant then goes to the bathroom, washed his hands and legs and came out.

The assailant then took the car key and switched on the ignition for two to three times and after a few minutes, he took away her gold chain weighing 64 grams, two pair gold bangles weighing 60 grams and the iPhone belonging to her husband. Once the assailant left the house, profusely bleeding Dr. Keshav came out of the house and shouted for help.

His neighbours, on hearing his screams, immediately came out and called the Diagnostic Centre to send the ambulance immediately and the bleeding couple was first taken to Adithya Hospital in Gokulam  and then to DRM Hospital in Vontikoppal, where they were provided first-aid and referred to Apollo BGS Hospital in Kuvempunagar for further treatment.

Vijayanagar Police have registered a case and investigating.

According to information available, there was no CCTV camera near the house. However, the cops were looking at the footages from nearby CCTVs for clues about the assailant.

A family of doctors

Dr. Keshav P. Raichurkar is a Consultant Radiologist at Adithya Hospital, apart from running his own Diagnostic Centre. His wife Dr. Krishnakumari works as overall in-charge of the Centre. Their son Karthik K. Raichurkar is a Gastroenterologist in Bengaluru and daughter-in-law Dr. Radhika is an Ophthalmologist. Their daughter Dr. Archana is doing DM-Neuro and their son-in-law Dr. Adesh is a Neurologist. All are working in Bengaluru.

According to FIR filed by Police, minutes after attacking the couple, the assailant told them, “I am Nithin…when I came and requested for job, you sent me back without giving me job. So, I have done it.” This statement has given credence that the assailant knew about the couple and had kept a watch on their movement including their time of going to the Diagnostic Centre and coming back. This incident has shocked Vijayanagar residents as it is a crowded place with movement of people till midnight.

There is a vacant site next to their two-storey duplex house. There are three rooms on the first floor. The couple stays in the ground floor. When Police inspected the house, they found blood on the floor in the dining hall, verandah and room and also found food kept ready on the dining table.