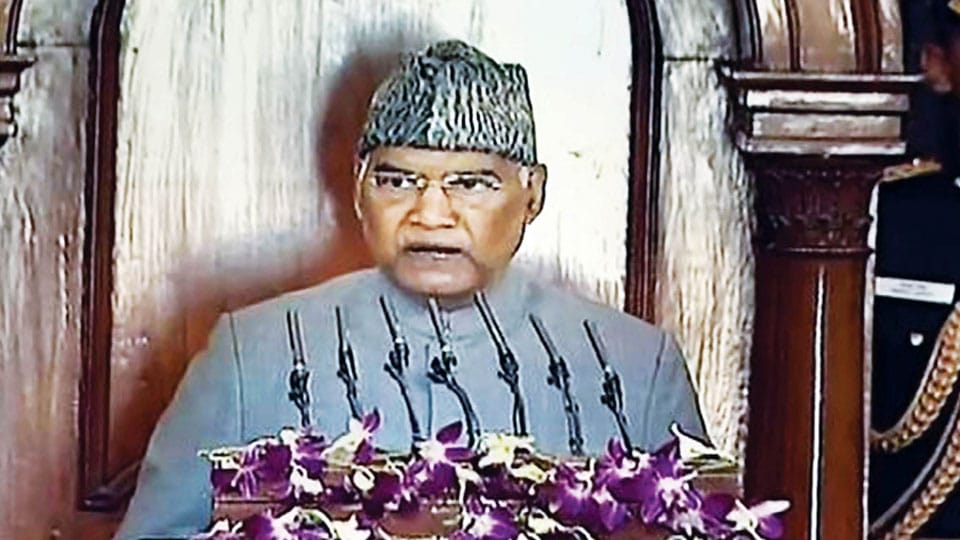 New Delhi: The Budget Session of the Parliament began this morning with strict observance of restrictions for Coronavirus and President Ram Nath Kovind addressing the members of both Houses seated in three locations.

The President congratulated the Central Government for its “timely decision” to implement lockdown as it “saved the lives of lakhs of citizens”, and pointed out that the number of new COVID-19 cases was going down rapidly in the country.

President Kovind, in his address to a joint sitting of the two Houses of Parliament, also paid tributes to those who succumbed due to the virus.

Speaking about the violence on Republic Day, President Kovind called it very unfortunate and said, “The Constitution that gives us the right to freedom of expression, is the same Constitution that teaches us that law and rule should be followed equally seriously.” He said his Government respects the Supreme Court’s decision to stay the implementation of the farm laws and shall abide by it.

Boycott: President Kovind’s customary address ahead of the Budget Session was boycotted by leaders of 18 parties, who skipped the event in solidarity with farmers protesting at Delhi’s borders against the three farm laws.

“Joint sitting of Parliament amid Corona pandemic is essential. It’s a new year, a new decade and we are also entering into the 75th year of Independence. Today all MPs are present here with message and trust that however tough be the challenge neither we nor India will stop. In this fight against the pandemic, we lost many citizens. Former President Pranab Mukherjee passed away in this Corona period. Six MPs left us untimely due to COVID. I pay my tribute to all of them,” he said.

“I am satisfied that the timely decision taken by my Government saved the lives of lakhs of citizens. Today the number of new COVID cases is going down rapidly. The number of recoveries is very high,” he added.

Commenting upon the vaccination drive against COVID-19 which started on Jan. 16, President Kovind said, “It is a matter of pride that India is running the biggest vaccination programme in the world. Both vaccines of this programme are made in India. In this crisis, India shouldered its responsibility towards mankind and provided lakhs of doses of vaccines to several nations.”

Union Finance Minister Nirmala Sitharaman will table the Economic Survey-2021, which will present a detailed account of the state of the economy, this afternoon. The Budget session will be held in two parts, from Jan. 29 to Feb. 15 and from March 8 to April 8. There will be a total of 33 sittings.